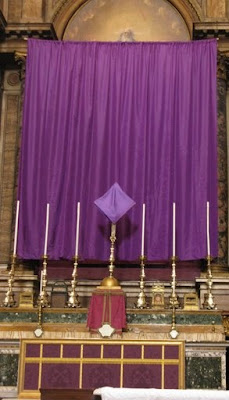 Passiontide veiling in the church of Ss. Trinita, Rome, from the New Liturgical Movement

For a long time I didn’t actually know why we veiled images in the church during this portion of Lent we call Passiontide. I thought it was probably the beginning of that process of stripping away adornments and creating an impression of shocking starkness in the space where heaven meets earth, a process which reaches its zenith on Good Friday, when we see the altar bare and unadorned, suddenly so much like a sepulchre, or the empty hill upon which the Cross will soon be raised.

This Sunday however, in looking over the readings of Mass in the Roman tradition, I read that the meaning behind this custom of veiling is found in the Gospel reading. After answering to the accusations of blasphemy made by the Jews, and in the midst of an attempted stoning, Our Lord does something simple and almost obvious but redolent with importance. “Jesus hid himself, and went out of the temple”. Our Lord, the King of Heaven, went away and hid himself to those around him.

In S. Magnus on Sunday, we heard a different reading from the Gospel, the story of the woman taken into sin who was to be stoned. “Let he who is without sin cast the first stone” says Our Lord, calling those around Him to self-examination, and the realisation of their own hypocrisy. All they can do, on reflecting momentarily on the enormity of their own sins, is walk away. In this story too, we find Jesus hidden. In the middle of this episode, in which He teaches us so much with so few words, He is still mysteriously writing in the dust, tracing words which are hidden to the Gospel-writer and the crowd, and hidden to us.

We know that before the agony of His Passion, which started with the first realisation of what was to come, Jesus went away to fast and to pray. When we in Lent prepare ourselves by prayer and fasting, we are sharing in Our Lord’s own preparation, and in Passiontide we do so more by following Christ into our own hiding place. Under the purple veil of penance, we are taken into a face-to-face encounter with ourselves, and an intensive process of self-examination begins. The Prince of Glory on the crucifix is hidden to us, as also is the glory of heaven, represented by His saints. Now we are being called into a time of hiding with ourselves, a time of honest self-encounter, of penance and decision. In Passiontide we veil ourselves and hide ourselves away to be transformed by prayer, and to be like the One who came to save us.
Posted by ex_fide at 11:19