Fraternity of Our Lady de Salve Regina in Walsingham 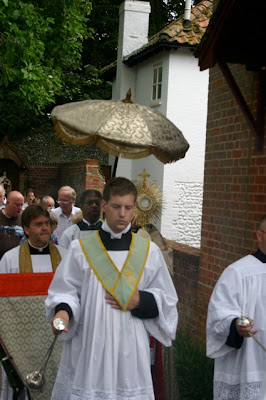 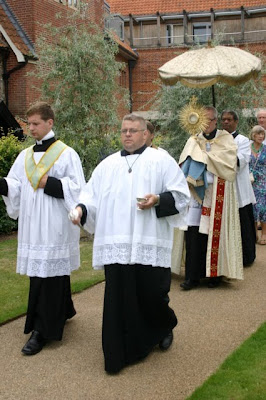 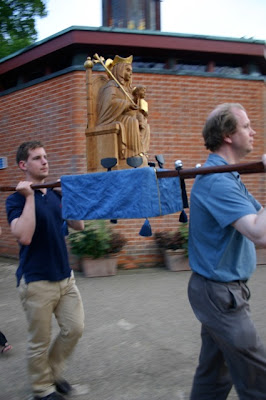 Bad Walsingham Procession - I don't see why pilgrims should have to carry Our Lady of Ronseal around, rather than an image that looks more like the real McCoy. Unrobed image-bearers and those funny little pen-lights around the statue. Oh dear.....
Just wanted to share a few photos from this year's pilgrimage to Walsingham with the Fraternity of Our Lady de Salve Regina, which happened this weekend.

Tat-spotters will notice that in the photos I am wearing a blue sash or ribbon around my neck when robed for serving liturgical or devotional functions. This blue and gold band is the privilege of members of the Court that governs the Fraternity, and it is worn at all Fraternity events and by Court Members whenever they serve or celebrate the Sacraments. If you'd like more information about the Fraternity, or you'd like to join, then please contact me.

A Fraternity was founded in 1343 for the purpose of singing the hymn Salve Regina - a practice that was repeated in a number of other churches of medieval London. Records of neighbouring churches show that they too observe this practice with entries in several wills leaving property and money for the purpose.

Here at St. Magnus the image took the form of the Salutation of the Virgin by the Archangel Gabriel. Subscriptions of the members were devoted towards the five candles that were burnt before the statue during the singing of the hymn. Further allotments of money were used to provide altar cloths, plate and other accessories for the maintenance of the chapel. The architect of Westminster Hall, Henry Yevele, left in his will money to maintain a lamp that was to burn perpetually in front of the statue. Yevele, who died in 1400, was buried in the nearby chapel.

At the time of the Reformation in the 16th century the Fraternity was dissolved, and not reformed again until 1922. Currently [1994] there are some fifty to sixty members. The hymn with petitioning prayers is said or sung after the Eucharist throughout the year. The Fraternity's badge is shown in the stained glass window at the East end of the North wall of the church above the reredos of the Lady Chapel altar. 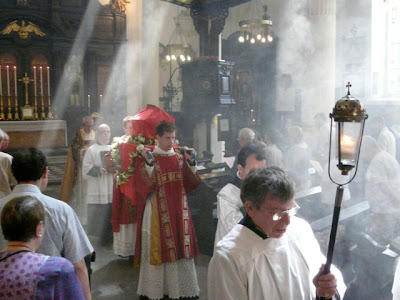 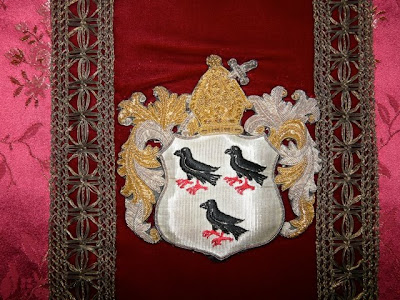 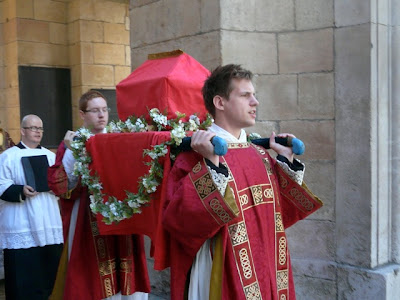 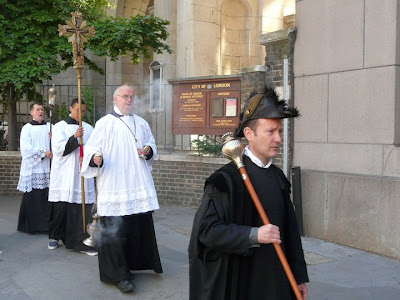 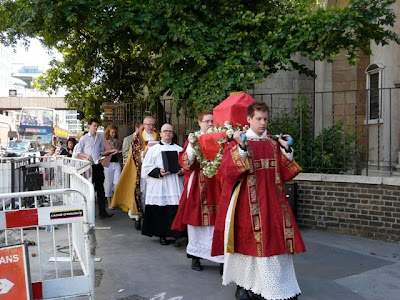 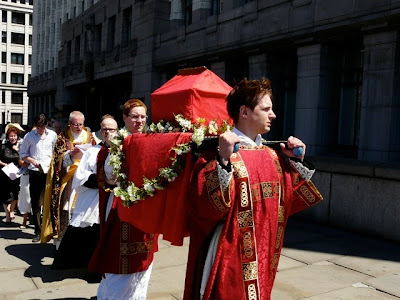 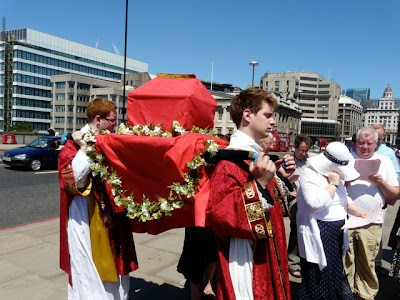 At the approximate place of the former Chapel, the relics made a station, and the Office of Sext was sung. This was followed by the Anthem of the Benedictus of the Office of S. Thomas of Canterbury, using the Sarum chant. On the return to the Church, the "praise psalms" 148, 149 and 150 were sung. On arriving at the church, the choir sang the Antiphon of the Magnificat of the aforementioned Office, followed by the versicle and collect. The reliquery was then removed from the Feretory, and place on the High Atlar, then censed, and the faithful had an opportunity to venerate. The reliquery also contained a fragment of the True Cross, among other relics, which explains the genuflections made by some. After Benediction of the Relic, the dismissal was given and all retired to a delicious curry lunch in the sun.
Posted by ex_fide at 19:46 20 comments