Ss. Thomas the Apostle and Thomas of Canterbury 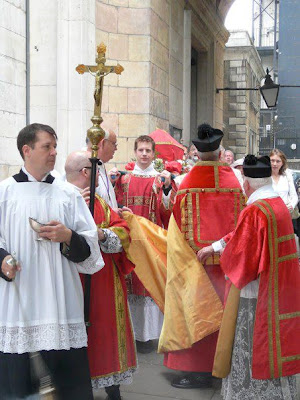 On Sunday we kept the feast of the Apostle Thomas. As we are also near to or in the Octave (or perhaps even more tenuously, the orbit) of the Feast of the Translation of the Relics of S. Thomas of Canterbury, we carried our relic of that Saint up to London Bridge, to approximately the site of the chapel of ease dedicated to him that stood on the old London Bridge and lay within the boundaries of the parish of S. Magnus. In the photo above, you can see the procession forming the Churchyard. 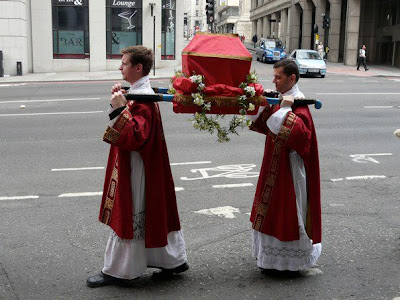 The Feretory containing the relic is carried by two Subdeacons 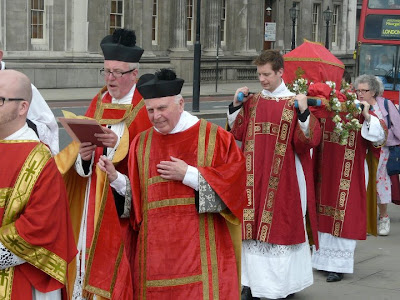 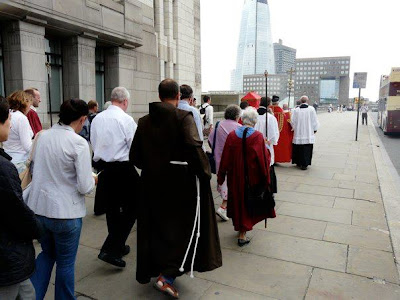 The Procession makes its way up to London Bridge. The Friar whom you can see here is Fr Clark Berge SSF, who is staying in the UK for a conference. The Churchwardens carry their rods of office. 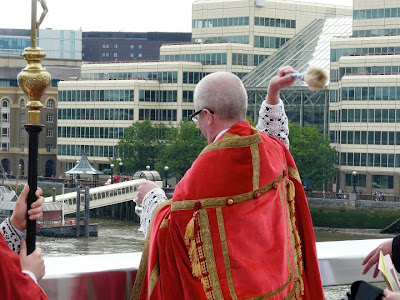 Cardinal Rector, Fr Philip Warner, blesses the former site of the Chapel and sprinkles it with Lustral Water. The antiphons and versicles from one of the offices of the feast were said with the Collect. 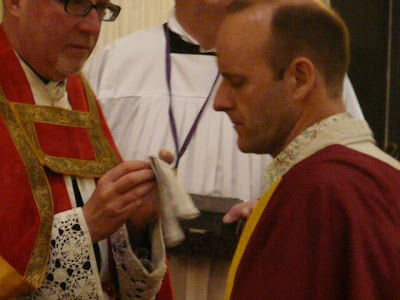 Back in the Church, a Churchwarden venerates the relic.
Posted by ex_fide at 16:28 0 comments

Here's a little write up from the Church Times about the first solemn pentecost vigil in the UK in 55 years:

by Glyn Paflin
© not advert

I KNEW I would one day need a 1933 English Missal for the Laity when I bought one at Easter 1988 — recording the date in the front, as bookish young men still do, no doubt, if they haven’t fallen for the latest electronic wizardry.

But when at long last, on the eve of Whitsun 2011, no other book that I own would do as well, where was it? Certainly not where it needed to be, in St Magnus the Martyr, London Bridge, as we in the pews looked at the backs of two cantors briskly inton­ing six lengthy Prophecies — in the Authorised Version, needless to say — while the celebrant read them at the altar.

So, though too much fuss is made about versus populum by Anglicans who call themselves Modern Cath­olics, I do begin to see why a “com­mon-sense” view of liturgy — if not, in­deed, a rather Anglican one — began to make itself felt in the Roman Catholic Church in the 20th century. In the mid-1950s, the Pente­cost vigil became a casualty of the new way of thinking, which was about to transform the worship in RC churches.

So this was history in the making; for we could be confident that the Bible-based service revived by St Magnus’s was a great rarity if not, indeed, probably a first for some half a century — and just the thing for this KJV year. The altar sheathed in violet, and the candles unlit; the sacred ministers in their Lenten vestments, prostrating during the sing­ing of the litany, having returned with the paschal candle from the bless­ing of the font; and the bells ringing during the Gloria of the mass. . .

So, what had it all been about? It was, I was told by the MC, a service from ancient days when there were too many candidates for baptism to be “done” at the Easter vigil. It certainly makes much more of an event of the festival of the descent of the Holy Spirit than we are used to now that both the Ordinary Form of the Roman Rite and Common Wor­ship take us back into green on what used to be Whit Monday.

Maybe there is something to be said for an Anglican cathedral-style version of this service for the Eve of Pentecost, if it hasn’t already been done: those readings that I heard were Genesis 22, Exodus 14 and 15, Deuteronomy 31, Isaiah 4, Baruch 3, and Ezekiel 37. But it is possible that the old ritual notes could be followed with a freer hand. . .

I'm very pleased with Mr Paflin's article, which I'm sure has brought the existence of the vigil to the attention of many people, as well as publicising S. Magnus - very good work.

1. I think the common-sense view of liturgy to which he refers is that the prophecies were sung facing the altar. At S. Magnus, the acoustics didn't really support that as an option and perhaps, had we turned around to sing them, no one would have needed to reach for a hand Missal! I don't see why they can't be sung facing the other way, if this means everyone can hear them. I'm sure a cathedral rendering of this service would involve the prophecies being read by laity with the antiphons and collects being sung. My own view is that while this would be a lovely Anglican service, it's not Liturgy, and why bother imitating Carols & Nine Lessons?
2. The Litany of the Saints did not work at our vigil. With only one cantor and the petitions doubled, and not having the full text printed out, it was sort of torturous straining to hear what was being sung. If we are to do the correct thing and keep the full Litany, doubled, we need to go on a walk around the Church in procession or something. I imagine that next year, they will simply not be doubled.
3. I think priests should think very seriously about drafting an Anglican cathedral-style Vigil service based on the traditional rite, without reference to the modern Roman Vigil. Even if they toned it down in terms of length, and followed the rubrics "with a freer hand", I'm certain the result would be more authentic - and baptismal. I can't wait to see the Archbishop of York baptising adults in a paddling pool on the Eve of Whitsunday in the future!
Posted by ex_fide at 09:09 0 comments