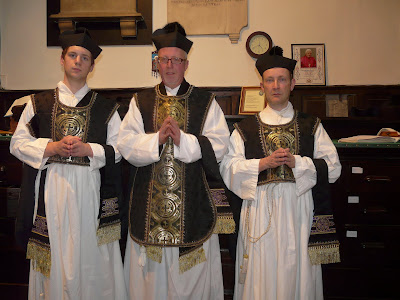 It is my pleasure to present the new set of Black folded chasubles for Good Friday made by Nick Sargent at S. Magnus the Martyr for this Holy Week. As you can see in the above photograph, we had decided to go for the Spanish cut of chasuble, and to fold them at the breast as one would a Roman chasuble. These are certainly the only Spanish-cut folded chasubles I have ever seen, most certainly unique in London and possibly in the UK. 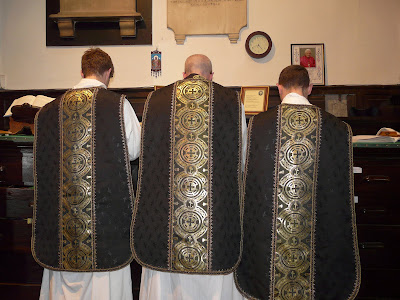 This shot from the back shows the exquisite shape from the back, plus the effect given by the uniform single orphrey at the back. The contrast between the fine pattern of flowers on the chasuble fabric and the large, round cross-based motif is very pleasing. But these are not fussy vestments that distract the eye. Rather, they beautify the liturgy and contribute to a sense of solemnity which is entirely appropriate to Good Friday. 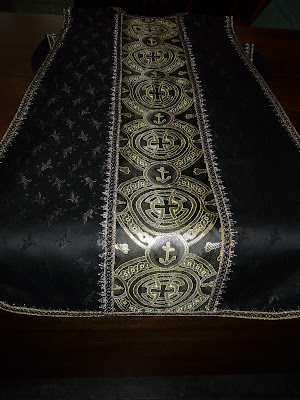 The orphrey fabric came from Damascus, from a supplier on Straight Street which has long had a friendly relationship with S. Magnus. Our purple High Mass set with dalmatics also features fabric from this shop. The orphrey pattern for this set features an anchor amidst circular crosses, a sign of hope for those who chose to discern it in the Passion which these vestments recall. 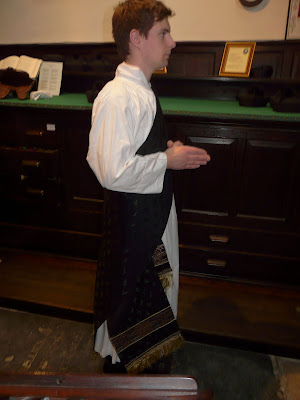 Here I am posing as a Deacon, although I think I can get away with it since it's just a photo-op. The broad stole features a band of the same purple as used on the maniples. The broad stole is also designed to cross over at the bottom to form the sort of "fish-tail" effect seen in other examples of the broad stole. 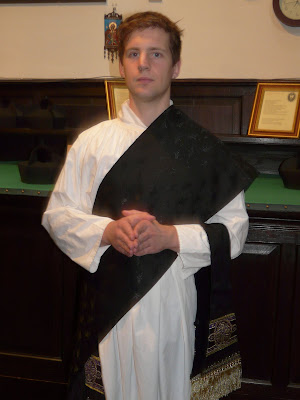