April, the Month of the Blessed Sacrament 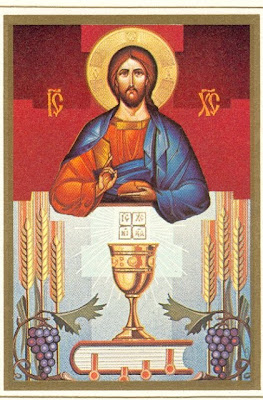 How appropriate that today, the first day of April, is both the first day of the month of the Blessed Sacrament, and the day of the Lord's Supper, when this Sacrament was instituted: God is clearly a liturgist. As many will know, Catholic piety assigns various devotions to specific months. Originally, certain devotions were given generous indulgences should they be made within a certain time, and gradually every month gained a devotional title to focus the piety of the faithful when no liturgical feast is being celebrated :
January: The Holy Name and Childhood of Jesus
February: The Holy Family
March: St. Joseph
April: The Blessed Sacrament
May: The Blessed Virgin Mary
June: Sacred Heart of Jesus
July: The Precious Blood
August: Immaculate Heart of Mary
September: Seven Dolours (Sorrows) of Mary
October: The Holy Rosary (and, less formally, the Holy Angels)
November: Poor Souls in Purgatory
December: The Immaculate Conception
Indeed, the twelve month cycle of non-liturgical devotion provides another set of squares in the rubiks-cube of the Christian year, which consists of a "dominical" cycle celebrating those movable feasts of the Passion, Resurrection and of Pentecost etc and the "sanctoral" cycle, which celebrates the Saints on fixed calender dates. Last week we saw how these two primary cycles can interact, when the Feast of the Annunciation, which is fixed on March 25th fell a day before the Feast of the Seven Sorrows, which is pegged to the Friday before Palm Sunday in the dominical cycle.
The devotional cycle adds another layer to the Christian year, and can bring us into a closer, more intense experience of the other, liturgical cycles. The devotional cycle demands of us personal, non-liturgical prayer, while the other cycles are about public, liturgical celebration or commemoration. The two are quite distinct, but at times their meeting can be a fruitful encounter for the soul. One common practice that was criticised in the early twentieth century was praying the Rosary during Holy Mass, and rightly so. In this case, there is no connection between what is happening at the altar and what is happening in the pew; there is no participio actuosa or "actual participation", as there was always meant to be, as the faithful "assisted" at the Sacrifice by praying it with their hearts and minds.
But where there is a connection, the public and private can fructify each other. From tomorrow, our private devotions will focus on the Eucharist, and our public devotion will be a re-enactment of the Passion of Our Lord, starting in the Upper Room and the Garden. As we enter into this Paschal mystery with devotion to the Eucharist on our hearts, we are able to seek in the Eucharist a deeper understanding and appreciation of the Passion, and vice-versa. As we make our preparation for our Paschal Communion, with that "sister Sacrament" of Holy Communion, Confession, we begin to grasp in our hearts the meaning of what's going around us in Church over the Paschal Triduum, and when we receive that Communion, which the Church advises we do, we truly become a people reborn.
Posted by ex_fide at 23:54