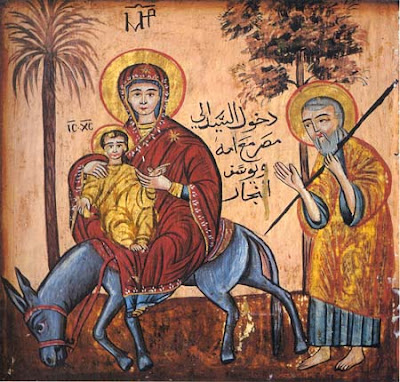 Although devotion to S. Joseph in the latter centuries of the Church's history has been more prominent in the West, it is useful to remind ourselves that it was in the East that we have our first evidence of his cult, more specifically in Christian Egypt. The first feast day of S. Joseph was reputedly kept by the Copts from the beginning of the 4th century AD, and a feast of S. Joseph the Carpenter is certainly entered, on the 20th July, in the oldest Coptic calenders known to scholars.
S. Joseph's early appearence in the devotions of Egyptian Christians is probably due to his important role in one of the Biblical narratives most cherished by the Copts: The exile of the Holy Family to Egypt. Countless popular legends have grown up around the Exile, with many monasteries, churches and shrines in Egypt positioned somewhere along the projected route taken by the Holy Family. To this day one can visit, in S. Sergius Church in Old Cairo, a grotto where the Holy Family took shelter. One can also dodge traffic on the highway through Ain Shams, a dusty modern suburb of Cairo, to sit under the paltry shade of The Virgin Mary's Tree, where the Blessed Virgin is rumoured to have stopped to feed the Divine Child. The exile has always been a popular subject for Coptic iconographers from the earliest times, and an example is above. The Holy Family entering Egypt, greeted joy by the leaping fish in the Nile, is the typical image of the Exile, with S. Joseph either leading the donkey, or walking behind the Mother and Child, who form the central image of this icon. The image also features in one of the modern iconographic mosaics which adorn the courtyard of Egypt's oldest church: the Mu'allaqah ("Suspended" church) in Old Cairo.
Coptic devotion to S. Joseph is rooted in his place in the Holy Family. It is his silence that abounds, not his words or actions. He is always there with Mary and Jesus, but never centre-stage. Let this inform your devotion to S. Joseph today:
The silence of Saint Joseph is given a special emphasis. His silence is steeped in contemplation of the mystery of God in an attitude of total availability to divine desires. It is a silence thanks to which Joseph, in unison with Mary, watches over the Word of God, known through the Sacred Scriptures, continuously comparing it with the events of the life of Jesus; a silence woven of constant prayer, a prayer of blessing of the Lord, of the adoration of His holy will and of unreserved entrustment to his providence. It is no exaggeration to think that it was precisely from his "father" Joseph that Jesus learned -- at the human level -- that steadfast interiority which is a presupposition of authentic justice.... Let us allow ourselves to be "filled" with Saint Joseph's silence! In a world that is often too noisy, that encourages neither recollection nor listening to God's voice.
Pope Benedict XVI
Angelus, December 18, 2005
(Please excuse the lack of paragraph breaks in this post. If somebody could give me a hint on how to actually make Blogger work, then please let me know. It's driving me nuts....)
Posted by ex_fide at 12:04