Palm Sunday in the pre-Pian rite 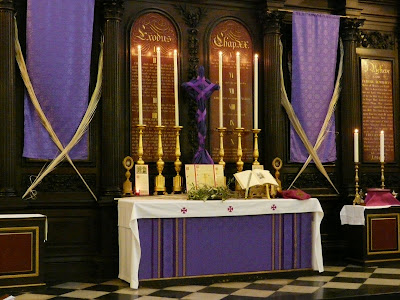 With no disrepect intended to the Venerable Pius XII, the Holy Week reforms that became effective during his pontificate truly make a dog's breakfast of the most important week in the liturgical year. I didn't quite realise how true that was until yesterday, when I assisted at a pre-Pian Palm Sunday for the first time, and realised why so many choose to cleave to this excellent tradition of liturgy. Not everyone will be familiar with the old-Old Rite rites, so I will try to describe the photos I have shared. 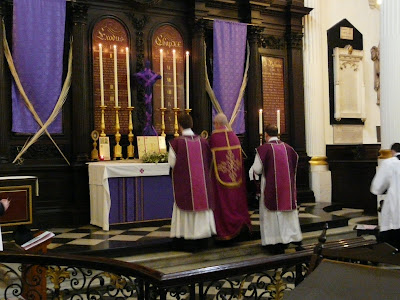 The blessing of the palms takes place within a ceremony that has the form of a little Mass, with its own Liturgy of the Word, Collects, Preface, Sanctus, and "Canon" of Blessing. This imitation-Mass clearly links the entrance to Jerusalem with the Passion that follows (in the Mass of the day). The vestments worn are folded chasubles for the Deacon and Subdeacon, and a cope for the Celebrant. The blessing and Mass both use purple, unlike the reformed rite instituted by Pius XII, and God only knows what happens in the Modern Roman Rite! In this picture the ministers arrive at the altar and move to the Epistle side. 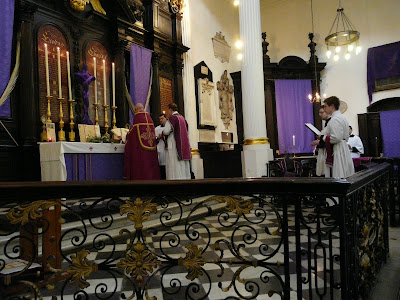 Hosannah, Son of David is the Antiphon that corresponds to the Introit of a Mass, and at Oremus of the Collect, the Subdeacon goes to his place and removes his folded chasuble, before going to sing the Lesson from Exodus at the appointed place. 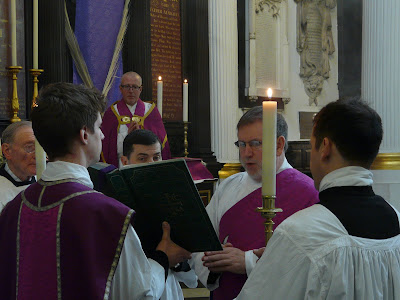 There is also a Gospel proper to the blessing, which recounts the entrance of Christ to the city. For this, the Deacon wears his broad stole as he would at Mass. The Celebrant is listening from the Epistle side, because the Missal has not been moved from the place of the Palms. 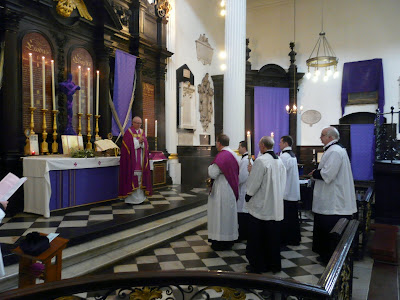 The Celebrant kisses the book and is censed as at Mass. 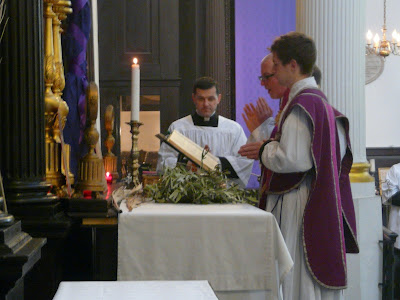 A preface follows, then a "canon" of five blessing prayers is said over branches of Olive and Palm. 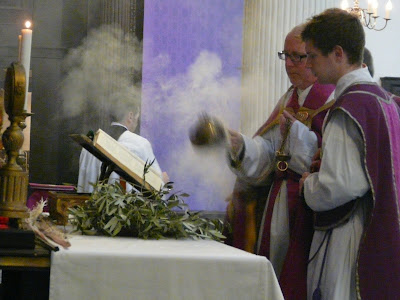 The branches are lustrated and censed. 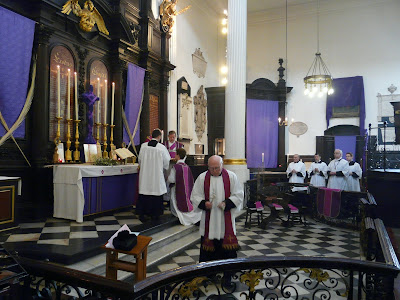 An assistant priest hands a palm to the Celebrant, and the ministers receive theirs kneeling. 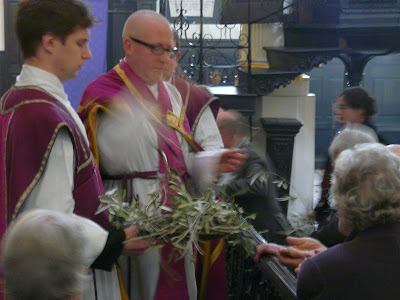 Palms are then distributed to the faithful 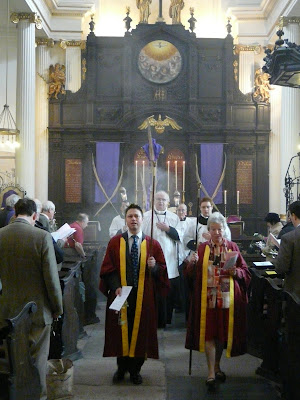 The procession forms and leaves the church 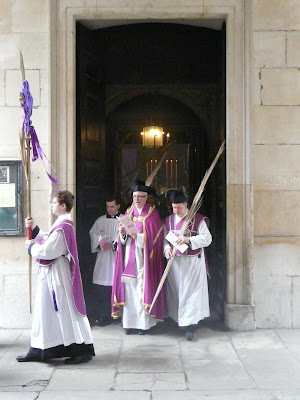 The Subdeacon carries the veiled cross 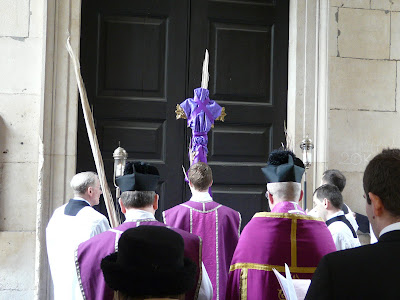 When the procession arrives back at the church, two cantors remain inside and shut the doors. From inside they sing "all honour, laud and glory" which is repeated by those outside. After this dialogue, the Subdeacon strikes the door of the church thrice with the foot of the cross.... 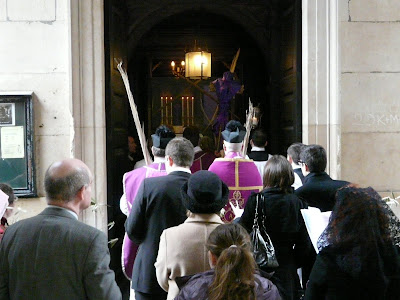 And the procession enters the church to the chanting of another Antiphon Ingredientem. As a side-bar, the piety of the women who chose to wear a Mantilla or a hat on this day is to be praised. 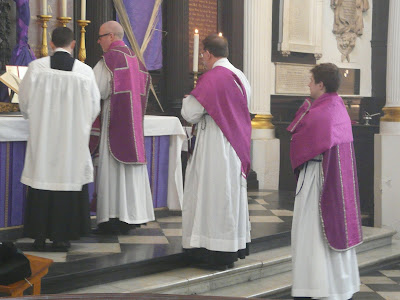 Mass proceeds as normal with the rules for Passiontide, except for the Chanting of the Passion, after which the end of the Passion is chanted as a normal Gospel, with incense (and acolytes but no lights) thereafter. Unfortunately I couldn't load the picture of the Celebrant, chanting the Passion as Christus at the Gospel side, while the narrator Chanted from the lectern.
This liturgy affected me in ways I didn't know it would. The sense of event which followed the first collect and reading, so familiar yet so different really caught my imagination. The silent, pregnant pause between the end of the Passion sung but the narrator, and the bit sung as the Gospel was truly dramatic and affecting. I have read that this climatic moment represents the desolation of the Church at the events described in the Passion. Even the slight pause that I made to genuflect while singing "and at the name of Christ...every knee shall bend" in the Epistle seemed appropriate, all leading up to the Great Event of the Eucharistic Sacrifice. I have rarely felt so free to engage with the Sacrifice as I did yesterday having heard the Passion sung. Hopefully I'll have time to post photos from the Triduum later this week. Stand by for a preview of our Good Friday vestments.