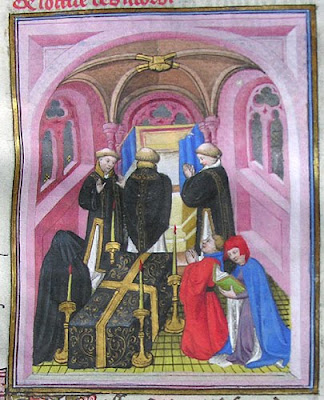 I grew up with a very simplistic idea of what happens to us when we die. As a child, heaven was something to hope for; a mystical realm where I would live on a cloud and eat sherbet dibdabs forever, chatting to my dead pets and meeting relatives I’d only ever seen in photos. I had a vaguer, more cautious idea of hell as a large room underneath the church hall, where naughty children were locked away with the devil, thanks to the frustrated attempts of our Sunday School teacher to explain such things to children. What I grew into, as a teenager and a young adult, was the idea that actually nothing happens to us when we die. The assault on my childhood fantasies as I moved into a secularised society was so severe that I, like almost everyone in my generation, came to regard even the possibility of believing in some form of continuation of life after bodily death as so outlandish, unrealistic and idiotic that even those who maintained that a soul can join God in His Kingdom was worthy to be held in contempt.

Not every belief, though, was so ardently attacked. I remember going to a Buddhist meditation class while I was at university, and telling friends that I thought I might believe in the transmigration of souls. That was fine by them. It marked me out as a little quaint but, they said, if it floats your boat then it’s ok if you “buy it”. It’s not surprising that the vocabulary of purchase is applied to the believability of different systems in such a group of young adults. In a way, it sometimes seems that ideologies, beliefs and religions are arranged in a spiritual market place, like poloshirts in Uniqlo, to be looked over, assessed and eventually, invested in. These days, Atheism is flying off the shelves, and to buy into anything else, while not a heinous crime will definitely mark you out as a bit nerdy. To chose the Christian faith, particularly in its Catholic colours, makes you an irredeemable spod.

I sometimes think that a particular culture is capable, at certain points in history, of falling back into a kind of spiritual adolescence or early adulthood. It’s the mid-life crisis of a society that, unlike the human version of the condition, repeats itself at various junctures. I don’t believe that it’s linked to a particular time or place, such as secular Western Europe in the 21st century or Pagan Rome. It happens whenever a community or society allows doubt, fear and prejudice to prevail, and as a result feels the need to reject and trample on its own collective memory. I believe that the hostility and ridicule that Christians suffer for their hope in the Resurrection of the Dead, as also their belief in damnation, is a symptom of that condition.

However, I am just as much a product of my generation and its culture as anyone. My route to the Faith has taken me through all of that posturing and sneering, and that is why to me, Christianity is so unlike anything that came before it. But my thoughts are still, in some way, conditioned by that mindset, I am still partly burdened by the “critical skills” and keenness for a witty jibe that is the baggage of a Cambridge education. How on earth am I supposed to believe, like I say I do, in the “resurrection of the dead and the life of the world to come”, in the punishing fires of Hell, or in the purification of Purgatory, when none of it is universally accepted by the world scientific community, let alone my friends? It isn’t easy. In the darkest moments, I feel trapped between the terrifying prospect that “this is it”, and incredulity at the florid accounts sometimes preached about what happens after this life is over.

Perhaps one way to begin the process of reconciling ourselves with the afterlife is to go back to a turning point in the narrative of salvation: the Incarnation. The resounding YES of Mary to God’s call gives way to the unintelligible NO of the Incarnation. I call it a NO, because in a way that we cannot hope to understand, God said NO to Himself, and divested Himself of the glory of omnipotence to be clothed in our own humble flesh, constrained by hunger, thirst, weakness, vulnerable to extreme cold or heat and ultimately to the cruelty of other men. In the resurrection, he rose again and was taken into heaven, body and soul, taking the flesh right into the Godhead, and he promised us that one day, we who love Him will join Him there too in the Father’s Kingdom.

For perhaps the first time in history, the flesh was not despised for the soul to be exalted. When God invited the Apostle to place his hand inside His wounded side, we saw God for who he truly is. In the mystery of the Incarnation, our human world of skin, bones, blood and guts begins to own the possibility of making sense, and in the Resurrection, that process of “making sense” will be complete.

Sometimes, we’ll find it difficult, even impossible, to believe fully in either the Resurrection or the Incarnation. Sometimes, we won’t even want to pray. Sometimes the wickedness of this world will turn us in on ourselves so much so that we lose interest in even thinking about God and resign ourselves to another option; crippling depression, or callow selfishness. However, bringing the thought of our Incarnate God, of our Risen Lord with us as we confront the terrible silence of death might help us grasp the precious thread of our faith and dare to open our eyes on the glory of God.
Posted by ex_fide at 15:54