Back to the Fold! 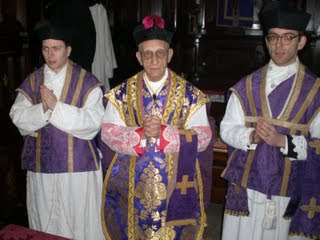 It’s almost inconceivable that there are still people who haven’t heard the biggest news story in the Anglican Communion in recent years, but just in case anyone missed it: St. Magnus the Martyr, London Bridge will be re-introducing the folded chasuble, or planeta plicata, for its Advent liturgies this year. Already I can hear gasps and whispers (and snarls from across the Thames) at this supposed liturgical innovation, but let me assure readers that it has been our custom at S. Magnus since time immemorial (allowing for a few extended black outs between the pontificates of Popes Clement VII and Benedict XVI) to vest the Deacon and Subdeacon at High Mass in the folded chasuble during penitential seasons such as Lent and Advent.

Perhaps because the original reason and method for folding chasubles became so obscure, the folded chasuble was the unfortunate victim of reforms to the Roman Rite of 1962 and fell entirely out of use. Largely seen as a curio to be hunted in the sacristies of great churches, the folded chasuble is now almost exclusively seen in use only at certain Anglican shrines such as S. Clement’s Philadelphia. This is largely because Pope Benedict’s motu proprio liberalising the celebration of Mass in the usus antiquior specifies that the 1962 Missal, being the last “Tridentine” Missal, should be used, along with its rubrics and instructions. However, many Anglicans of the “Missal school” have come to regard the 1958 English Missal as the last authentic expression of Tridentine liturgy in the Anglican tradition, and as such maintain certain customs and usages which were lost in later Roman Missals.

So it is my pleasure to announce that, God willing, the folded chasuble will once again be seen in S. Magnus, as an expression of our desire to continue the authentic traditions of our Fathers in the Catholic movement; as a sign of our commitment to offering the Liturgy of our predecessors, and for Advent, to express the penitential nature of that season in vivid liturgical vocabulary.

This post is also an open invitation to people interested in serving at S. Magnus. We occasionally borrow servers for big events, but like most churches, we generally get by on a small but dedicated serving team, who nonetheless have other commitments and leave us short. If you live in London and think you might want to serve at S. Magnus, please contact us. This year we have been able to offer a High Mass on many Sundays, and hopefully we will be able to do so in Advent and Christmas. Still, we need people with expertise and an interest in traditional liturgy to help make our celebrations run smoother. Be assured you would not be trained in the idiosyncrasies of some “High Church”, but rather you would be serving THE Mass of Ages.
Posted by ex_fide at 10:51