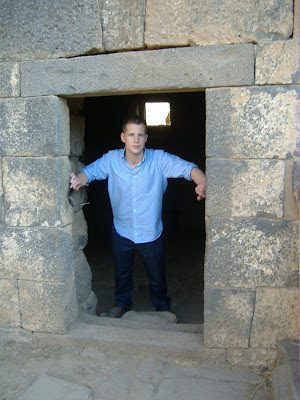 Well, the Indian Summer is probably over so, so I can't pretend to still be on holiday. I admit it! My summer break did overrun slightly into....Winter.....However, in response to various enquiries, requests and suggestions (and also the rumour that I had been kidnapped in Syria and detained in luxury at a bedouin encampment), I've decided to write another post or two. A few people have persuaded me not to let Ex Fide expire, and I'm pleased to think that a Blog such as this still has something to offer to online community of Anglican Catholics of which I proudly consider myself a member. The way in which the blogosphere has provided a forum for debate for Catholics in the Anglican Communion, as well as those interested in their spirituality and claims; and the way they have been united around these blogs despite being separated physically by often huge distances, was my primary motivation for starting this blog in the first place, and I hope that, God Willing, it will continue to be of interest to those people in the ever-changing world of Ango-Catholicism.

Since the announcement of the new Apostolic Constitution almost two weeks ago, much time has been given to discussion, largely speculative at this stage, about what the Constitution might look like. I am not critical of this type of discussion, because it is important for priests especially to work out under what conditions and with what provision they would be able to move, with their parishioners, to Roman jurisdiction. Nonetheless, I feel as though I must bow out of providing long pieces about what an Anglican Ordinariate might look like and what our relationship will be with our buildings and former co-parishioners. So much has changed in the Church, but so much has changed also for me as an individual and as a Christian. I think that if I am to continue to maintain this blog on my own, I will have to keep the focus very much off the macro and on the micro as it were. The blog was also intended to advertise a London Parish that is very much in a phase of growth, and which I believe is a unique and precious beacon of Catholic faith and practice in an area which, on Sundays, feels like an open air museum. For that reason I hope to keep my focus on events at S. Magnus, and on the way that our Catholic faith is lived and experienced on the parish and individual level.

Thanks again for everyone's interest in Ex Fide!
Posted by ex_fide at 07:43