Liturgy of the Pre-Sanctified Gifts 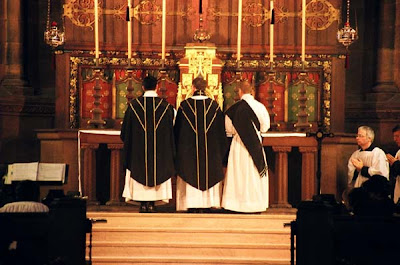 For almost 55 years, the Western Church has been largely bereft of a Liturgy of the Pre-Sanctified gifts, a service which our brethren in the East celebrate during weekdays of Great Lent, and which in the Latin Church has long been restricted to Good Friday. Instead of the Celebration of Mass, a service in which Communion is received from a Host consecrated at a previous Mass still forms part of the Liturgy of Good Friday, but the reformed rites of Holy Week introduced by Pope Pius XII altered the Liturgy so radically as to make it something else entirely, and not a genuine Mass of the Pre-Sanctified, but rather similar to an order for Holy Communion outside of Mass.

In the pre-1955 rite, the Liturgy of the Pre-Sanctified begins after the adoration of the Cross, when the Blessed Sacrament is taken in procession from the Altar of Repose to the main altar carried by the Priest, and is censed by two acolytes. Although the origins are of course different, this procession mirrors the Byzantine Great Entrance procession, and it is worth noting that in the Eastern Pre-Sanctified services, on this occasion the priest, rather than the deacon carries the diskos holding the lamb. When the procession arrives at the altar, the deacon arranges the chalice. In the pre-1955 rite, a large second Host consecrated at the previous night’s liturgy is placed in a chalice, and covered by a pall, upturned paten and finally a soft, white veil, which is tied at the node of the chalice. The deacon leaves the chalice covered and arranges the veil over the chalice as at Mass. Indeed, the whole rite of the Pre-Sanctifies points to the celebration of a genuine Mass in structure and symbolism, whilst also quite clearly being something other than the Eucharistic Sacrifice. The priest at this stage censes the Sanctissimum.

The priest then slides the Host from the chalice, onto the paten which is held by the Deacon, and is then placed, with the chalice onto the corporal. The Deacon then fills the chalice with wine, and a drop of water is added by the Subdeacon, and it is placed on the corporal and covered with the pall, all as at Mass, except that all of the gestures and prayers of the Offertory are omitted. The Gifts are then censed as at Mass, as the cross and altar. However, nothing else, including the celebrant is censed. The presence of this chalice of unconsecrated wine is one of the most obvious analogies to the Byzantine rite, where a chalice is also prepared, veiled and censed at the prothesis, and at Communion, the Consecrated Lamb is placed in the unconsecrated wine in the chalice.

The priest says the prayer “In spiritu humilitatis”, then kisses the altar and says the “Orate frates”. The response “suscipiat” is, however, not said and the priest does not make a full turn at the altar as at Mass. This prayer makes the same plea for acceptance that marks the end of the Offertory at Mass, but without its response, the rite is altered markedly: the people do not pray for acceptance from "thy hands", seen as no Mass is being celebrated, and the references to "praise and glory" are absent. The central parts of the Sacrifice, the secret, preface, sanctus and canon are not said and the priest passes directly to “Oremus. Praeceptis salutaribus” and the Lord’s prayer, sung in the ferial tone. With the Sanctus go the words "pleni sunt caeli et terra gloria tua", on the very day when God divested himself of glory. The embolism is sung out loud and its accompanying gestures are omitted. This mimicry of the structure of Mass is not perculiar to Good Friday, but also appears in the Blessing of the Palms on Palm Sunday, which has a "Liturgy of the Word" and a "Canon" of blessings over the palms so laid on the altar. In both cases, these ancient rites were divested of this unique identity and made to represent the rites of blessings and communion respectively from ceremonies outside of Holy Week. The reference to the Paschal Mystery, the very pivot of these observances, is lost.

Then comes the elevation, and the Deacon and Subdeacon, who kneel on either side of the priest but slightly back, lift his chasuble. In place of the bell, the crepitaculum or clapper is used. The ministers rise, the chalice is uncovered and the fraction is performed, saying nothing and not making the sign of the cross. Then bowing, he says “Perceptio corporis tua” following the normal rite of his Communion at Mass and then communicates himself. He then consumes the unconsecrated chalice, but without the usual prayers or rites, as this is not the Blood of Christ. After his communion, the Priest makes the normal ablutions of the chalice and his hands and the Deacon re-builds the chalice as at Mass. It has been a long custom of the Roman Church for only the Priest to receive communion on this day, but in the Eastern Liturgy of the Pre-Sanctified, the people would also receive Holy Communion. The Church building itself is now empty of the Blessed Sacrament (Hosts for Viaticum being reserved in the Sacristy or another Altar or Building) which emphasises the sense of mourning at the Death of the Saviour on this day.

In the reformed rite of 1955, the Sacrament, in the form of a Ciborium of small Hosts, is brought to the Altar in Violet Mass vestments, by the Deacon (loosing the parallel with the Eastern Great Entrance), and incense is not used. The preparation of the Host on the corporal and the preparation of the chalice, incensation and washing of hands, as well as the prayers from the offertory are not performed. The introduction to the Lord’s prayer is said immediately, not sung as before, the Libera Nos is said by the Priest and then Perceptio is said silently. The priest communicates with a Small Host, and then Communion is given to all with the usual ceremonies of Mass. After Communion the priest makes his ablutions with vessels which were placed on the Altar for this purpose before the procession.

The simplification of the Communion rite of Good Friday eliminates both the parallels with the rite of Mass, and the analogies with the Byzantine Liturgy, both of which are integral to the identity of this rite. The reformed Holy Week makes the Communion no different from the distribution of Communion outside of Mass, such as would be given at a Wedding or for some other cause. With the reformed rite of 1955, the Western Church loses its one true Liturgy of the Pre-Sanctified. I wonder if the Communion rite was deliberately “rationalised” to bring it into line with other forms for Distribution of Communion, or whether it was simply intended to be shortened to make room for the prayers which follow afterwards. I wonder also if we will ever see aspects of the older rite re-emerge with the reform of the reform. Let’s wait and see.
Posted by ex_fide at 15:20