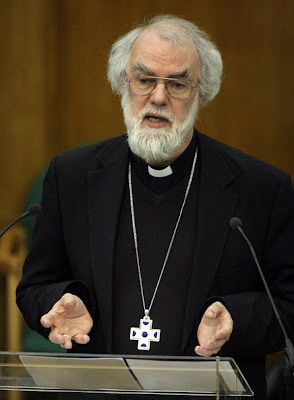 Here is some of the text of the Archbishop of Canterbury's address yesterday in Rome, the full version of which is available here. I've taken out three paragraphs which I find particularly interesting, because in them, the Archbishop cuts to the chase and asks the questions we ought to be able to answer. As for the sections that I have highlighted, I ask readers to ponder them in the light of the Gospel wisdom of Luke 6:44 "For each tree is known by its own fruit. For men do not gather figs from thorns, nor do they pick grapes from a briar bush."

I don't want here to rehearse the arguments for and against the ordination of women, only to ask how recent determinations on the Roman Catholic side fit with the general pattern of theological convergence outlined. The claim of certain Anglican provinces is that the ordination of women explicitly looks to an agreed historic theology of ordained ministry as set out in the ARCIC report and other sources. Beyond that, many Anglicans have been wary of accepting a determination of who can be ordained that might appear to compromise the some of the agreed principles about how ordination relates to the whole body of the baptised. This, by the way, would hold for at least some who believe that a decision within a divided Church about a matter affecting the universal ministry should not be taken by a single province or group of provinces. But for many Anglicans, not ordaining women has a possible unwelcome implication about the difference between baptised men and baptised women, which in their view threatens to undermine the coherence of the ecclesiology in question.

And the challenge to recent Roman Catholic thinking on this would have to be: in what way does the prohibition against ordaining women so 'enhance the life of communion', reinforcing the essential character of filial and communal holiness as set out in Scripture and tradition and ecumenical agreement, that its breach would compromise the purposes of the Church as so defined? And do the arguments advanced about the "essence" of male and female vocations and capacities stand on the same level as a theology derived more directly from scripture and the common theological heritage such as we find in these ecumenical texts?

Let us take this a stage further. All ordained ministers are ordained into the shared richness of the apostolic ministerial order – or perhaps we could say ministerial 'communion' yet again. None ministers as a solitary individual. Thus if the ministerial collective is understood strictly in terms of the ecclesiology we have been considering, as serving the goal of filial and communal holiness as the character of restored humanity, how much is that undermined if individuals within the ministerial communion are of different genders? Even if there remains uncertainty in the minds of some about the rightness of ordaining women, is there a way of recognising that somehow the corporate exercise of a Catholic and evangelical ministry remains intact even when there is dispute about the standing of female individuals? In terms of the relation of local to universal, what we are saying here is that a degree of recognizability of 'the same Catholic thing' has survived: Anglican provinces ordaining women to some or all of the three orders have not become so obviously diverse in their understanding of filial holiness and sacramental transformation that they cannot act together, serve one another and allow some real collaboration.