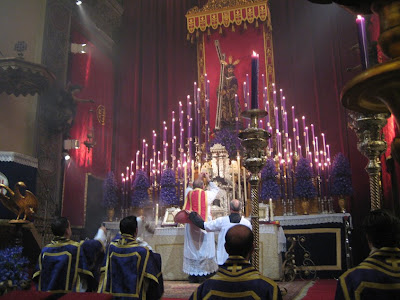 Check out this picture of an Old Rite Mass celebrated in Seville, which was posted on the New Liturgical Movement site. This picture shows how, as the Usus Antiquior is revived across Catholic Christendom, so too are the traditions that accompanied it when it was the norm. In this picture you can see some examples of the local Spanish use of the Roman rite, such as the ridiculous (i.e. just about right) number of candles on the altar, the Spanish cut of chasuble, and the acolytes and thurifers in tunicles instead of Roman cottas.

There are plenty of interesting comments to read on the New Liturgical Movement post, some people asking about the tunicles. Apparently the confraternity involved, "el Silencio", has the particular privilege of vesting their acolytes in tunicles which is an established and ancient custom in Seville (http://www.newliturgicalmovement.org/2008/03/interesting-liturgical-images-from.html) also practiced in France, particularly Lyons, and possibly also in Salisbury.

One hopes that such questions and research might lead to more discussion about the status of minor orders in our own church. I am personally in favour of a serious revival of the minor orders, and the liturgies and customs attached to them. It is common to invite a layman to act as Subdeacon at a Solemn High Mass, and there have long been altar societies like the GSS in the Church of England, but how much better would it be, from a pastoral perspective, to reinstitute minor orders? Surely if members of that group which we now call "servers" were given differentiated roles, and solemnly inducted according to traditional Episcopal liturgies, their value to the worshipping community would be more clearly stated, and their morale enhanced. And what a good way to get young people involved, and to keep them involved, in the liturgical life of the church.

In many Orthodox churches, the minor orders have this function of rewarding service to the church and recognising a particular level of commitment. For example, it is not uncommon for ex-seminarians who have decided that they don't have a calling to the priesthood to marry and be ordained Subdeacon. Readers traditionally receive the tonsure in a special service.

In some parts of Western Christianity too, the minor orders have been retained; the FSSP and other traditionalist Catholic organisations still ordain their seminarians to the subdiaconate. In the Anglican communion, one can train to be a Reader and march around in a blue tippet, although in this case the focus is on the licensing of a lay minister rather than the ordination of a person to Minor Orders. The traditional view of Minor Orders has held that they are a sacramental, that is, something which manifests the respect due to the Sacraments, and as Catholic Anglicans looking hard at the church of the future, perhaps it is time to seriously reconsider these forms of ministry.
Posted by ex_fide at 15:03