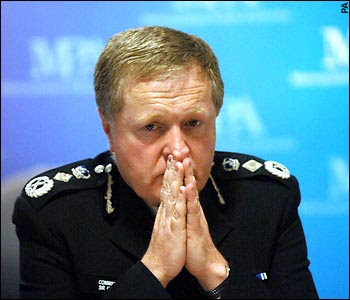 With thoughts returning again and again to the upcoming meeting of General Synod, I came across this interesting article on the Times Faith news webpage, about one of the motions being put before Synod this week. The proposed motion is to ban Church of England clergy from membership of certain “racist” political parties, such as the BNP, and has already faced opposition from some bishops as an infringement of human rights. The motion is backed by former Metropolitan Police Commissioner Sir Ian Blair, and his argument informs the first part of the article:
Church of England clergy could be barred from membership of the far-right British National Party under a controversial motion to be debated this week, The Times has learnt.
The move, which coincides with intense public debate over race and equality, is backed by Sir Ian Blair, the former Metropolitan Police Commissioner, who will attend the General Synod to support a policy borrowed from the Association of Chief Police Officers, which bans officers from joining the BNP.
In his first interview since leaving Scotland Yard, Sir Ian said that his Anglican faith had been a great comfort and support during difficult times as the country’s most senior policeman. "I used to say to my wife, if I did not have my hour and a half on a Sunday morning, the week was going to be much more difficult," Sir Ian said.
He saw a parallel, he said, between the Church and the police in that both "need to be able to welcome people from all backgrounds". He added: "The issue around race is about equality. I am on that wing of the Anglican Communion that is very much in favour of women priests."
Sir Ian will sit at the Synod with the proposer of the motion, which states that clergy and lay staff of the Church cannot belong to any organisation which contradicts "the duty to promote race equality". The motion specifically identifies the BNP.
Now, while I believe that a BNP-free Church of England would be no bad thing, I have serious concerns about the particular view of the Church of England that has motivated the proposal of this motion in the first place, and which is quite clearly expressed here by Sir Ian Blair.

We read that the motion is consistent with "a policy borrowed from the Association of Chief Police Officers", and that the ex-Commissioner "saw a parallel, he said, between the Church and the police in that both "need to be able to welcome people from all backgrounds"." As a Catholic, I believe that the view that supposes the established Church of England to be merely an arm of the state that is subject to the same regulations as any other government department, and that Her ministers are effectively civil servants who, in exchange for a guaranteed covenant of workers’ rights are duty-bound to perform the bidding of Synod (a judicial committee) is a constant threat to the ecclesial integrity of our church. As long as this view prevails, and in reality it is already enshrined in the legislation of establishment, then we will suffer no end of woe.

It was the bullish Establishment mentality that sparked the Oxford movement and, ultimately, the Catholic revival in our church, but it has been a root cause of splits and divisions ever since. The notion that the Church of England is subject to employment laws that guarantee gender equality in the workplace hugely influenced the church to move to ordain women to the Priesthood, and (quite logically and fairly if you take that position) more recently to the Episcopate. Now, according to this motion, the Church of England has a duty, like any other government body, to promote racial equality by proscribing certain political affiliations. I’m not too interested in the rebuttal that claims that such a move would be an infringement of human rights, but I would be shocked and appalled if any diocesan Bishop in the Church of England would happily allow a clergyman in his diocese to take up full and active membership of a party like the BNP. Furthermore, I find the idea that the Church lacks the capacity to respond to and deal with racism and hatred towards immigrants pretty patronizing.

It does not surprise me that the ex-Commissioner is "in favor of women priests", and nor am I surprised that he enjoys an hour and a half of church each week to get him through. For according to the view of the Church that he expresses here, the Christian faith can be packed into a weekly Sunday morning slot, from which it can never escape; the state’s adopted ideas of race and gender and the value of equality are more important that "outmoded" Church teachings about the same and matters of faith and morals should be determined by a vote in Synod. Of course, as Catholics we cannot agree.

Our Christian faith preaches the fullness, the comprehensiveness of God’s will, revealed in Christ Jesus, and our faith teaches also that whether we like it or not, we are called to accept and conform to that Divine will. By coincidence, another motion proposed calls on Synod to recognize the uniqueness of Christ in an age of multi-culturalism, which liberals fear implicitly states the Church’s duty to proselytize from other faiths. What is Synod saying if they feel unable to affirm that motion? There may be bits of it that I don’t like sometimes, or bits that I find hard, but the Faith cannot be diluted to make everyone happy, nor can the Faith be sanitized and sterilized for public benefit, or bent to conform with society’s fluctuating notions of what is fair, right and good. Whether in a democracy or an autocracy, the Faith is non-political. Shouldn't this be true of the Church that teaches it? The next week or so will reveal how much the Church of England as a whole values that Faith, and if Synod determines that man’s law is above God’s law, and that innovation is better than tradition, then we who are ardently in love with the Church of England and desire never to leave Her, whether we like it or not, will find ourselves hopelessly spurned.