In praise of the Silent Canon 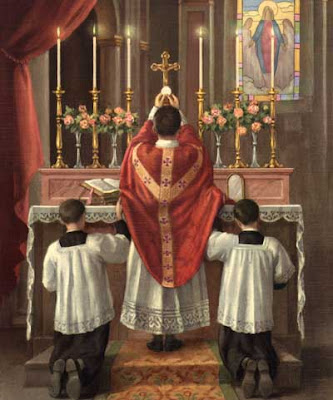 Because I enjoyed reading it so much, and thinking about it so much, here is a wonderful blog entry by Fr. John Alexander SSC from his site Videtur Quod in praise of the so-called silent canon. Comments can be viewed here http://videturquod.blogspot.com/2009/02/in-praise-of-silent-canon.html.

Let me be clear. In my fifteen-plus years so far in the Sacred Priesthood, I have never actually recited a Silent Canon, though I have been accused of it. Nor am I planning to do so anytime soon.What I have done on a number of occasions is recite the Canon of the Mass (a.k.a. the Eucharistic Prayer), under cover of the choir singing a choral setting of the Sanctus and Benedictus, so that the words were inaudible to all but those standing with me at the Altar.The drill is as follows. After I intone the Sursum Corda and Preface, the choir launches into the Sanctus. Meanwhile, I recite the Sanctus quietly at the Altar; and then, while the choir is still singing, I continue with the first part of the Eucharistic Prayer, up to the Words of Institution. Then, when the Sanctus is finished—as far as the first Hosanna in excelsis—the bell rings and everyone gets down on their knees. I then recite the Words of Institution, with the requisite elevations and genuflections. Then the choir resumes singing at Benedictus qui venit in nomine Domini (or in the case of certain French Requiem Masses, with the Pie Jesu). Meanwhile, I recite the rest of the Eucharistic Prayer, up to the final doxology, Amen, and introduction to the Lord’s Prayer, which I intone aloud after the choir finishes singing.So, it’s not really a silent Canon at all. With the exception of the Words of Institution (which I say aloud in the hearing of the congregation) and the final Doxology (which I intone aloud likewise in the hearing of the congregation) it’s a mostly inaudible Canon but not a silent one.And yet. Sometimes I wonder what it would be like to do the full silent Canon. I’ve only ever seen it done once, at a parish that offers what is now called the Extraordinary Form of the Roman Rite. Without cover of music, one simply recites the full Eucharistic Prayer, Words of Institution and all, in a bare whisper inaudible to anyone other than God …What I’m describing epitomizes everything that modern liturgists despise. And yet my hunch is that rather than excluding the faithful from the liturgical action, the effect is quite the opposite. The silence draws the people in and unites their prayers with the Prayer of the Priest at the Altar--who of course stands facing ad orientem, in the same direction as they do.The interesting thing is that while the Silent Canon is certainly not part of the mainstream Anglican tradition, I can’t find any rubric in the BCP 1979 explicitly forbidding it. There is the old requirement that the worship of the church be conducted in a language understanded of the people, but is there anything similar requiring that it be recited at a volume audible to the people? Perhaps readers of this blog can fill me in on this point.Several years ago, I received an anonymous note after Mass complaining about the noise of the fans we use in the church on hot summer days. The note read in part: “The entire service was a waste of my time, for I could not hear a single word that was said.” (Or words to that effect.) Admittedly, the noise of those fans resembled the whine of airplane propellers, and I have since replaced them with quieter ones.But I wished I could have explained to that person that the purpose of liturgical prayer is not primarily the instruction or edification of the faithful, much less their entertainment or aesthetic gratification. I wished I could have explained that regardless of what this person could hear or understand, his assistance at the Holy Sacrifice of the Mass, by presence and prayers, was anything but a waste of time. But the Silent Canon itself makes all those points much more forcefully and eloquently than any such explanation ever could.
Posted by ex_fide at 23:14