The seeds of its own dissolution? 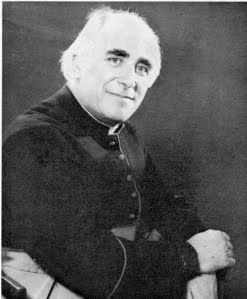 I'm currently reading Fr Colin Stephenson's amusing memoir Merrily on High, a very interesting first-hand account of some of the churches I know and love in the glory days of Anglo-Catholicism. I'm only about half way through, but one thought which Fr Stephenson repeats at various junctures of his story deserves comment and interrogation.

From the beginning of his testimony, Fr Stephenson asserts that the strain of Anglo-Catholics who threw their lot in with the "Baroque Catholicism of the Continent" were really dooming themselves to failure, as the fruits of the Liturgical Movement (perceived by Fr. Colin as intrinsically a good thing) percolated into the stuffy mainstream of Western Catholicism.

At points he recalls individuals whom he accuses, and I'm sure not erroneously, of adopting Papalism or Ultramontanism as a foil for inflicting their own whims on their congregations and communities. There is one passage in the book which typifies this opinion:

"Yet for all its [Anglo-Catholicism's] triumphalism it held within it the seeds of its own dissolution which the disorganisation of the last war simply accelerated. It had become congregationalist and cut off from the main stream of the Church of England and rejoiced to have it so. It had thrown in its lot devotionally with the baroque Catholicism of the continent just when that movement was about to be discredited in the church of its origin, and looking back at it now one realises that it had about as much chance of appealing to the average Anglican as the Folies Bergeres to the Mother's Union."

There are also frequent digs at "fussiness" in the Liturgical and Devotional aspects of the movement in the 20s and 30s :

"'It's not a sermon you have [at St Bart's, Brighton] but an interval while the wind performers empty their instruments'. Some months ago I should not have thought this funny, but now I could see the point and as I was leaving he said. 'Our High Mass is always over within the hour'." p66

"I did not see him [Fr Kenrick] often after this pilgrimage, which is recorded in his memorial in Holy Trinity, Hoxton, but I did once visit him there on a Sunday and was surprised to find only a handful of people at High Mass. I was still at the stage when I honestly thought that the externals of Catholic worship were bound to attract crowds. Mature experience has taught me that they are far more likely to drive them away!" p.69

..a reflective passage towards the end of the book...

"[Mount Athos] did reveal to me very clearly the dangers of trying to shut the Church up in the past. So much of the Catholic Movement in the Church of England has been a turning backwards and a holding on to certain positions with a fanaticism bred from a sense of insecurity." p186

"... the new Roman instructions for the rites of Holy Week laid down that on Good Friday the cross, if wished, could simply be held up for people to venerate in their places. When Duncan-Jones did this twenty years earlier in Chichester Cathedral he was the laughing stock of the whole Anglo-Catholic world." p. 77

It is difficult to isolate passages of the book which articulate in full Fr. Stephenson's retrospective critique of the fussiness, extremism and punctiliousness of the Anglo-Catholicism of his youth, but I hope you get a general idea of the argument, which could be summarised as follows: Some of the more Romanised Anglo-Catholics were only attracted to the movement for its colour and exoticism and had no interest in an authentic Catholicism (strangely never fully expounded in this memoir, whereas the "externals" are). The truest Anglo-Catholicism found its expression in the Reformed religion adopted later on in the Roman Catholic Church under its greatest hero-Pope John XXIII, which became far more palatable to Anglicans in general and has proved itself over time."

This retrospective criticism of the Anglo-Catholicism is common among the generation who grew up in its Golden Era, and who subsequently had to mourn its passing, and then took charge of the the introduction of the New Catholicism into the mainstream of the CofE. It is also the heritage of that generation of priests who were taught by Fr Stephenson's generation, and who knew him at Walsingham as youngsters, the same exuberant generation of fallen Catholics at places like Staggers, before Ena the Cruel put an end to their shennanigans; a generation that simultaneously revels in the old party badges of lace, birettas, continental vestments and baroque fittings, while owing complete allegiance to the Reformed Roman Liturgy and a vague notion of Papalism. There is a dreadful schizophrenia among these two generations of Anglo-Catholic clergy. The glory days were brilliant, but there is bitterness stemming from the fact that the movement failed to deliver on its promises. They do not know how to deal with the fact that while the Liturgical Movement and its most radical reforms in some ways signalled the death of Anglo-Papalism, Anglican Ultramontanism and Romanism as lively forces in the Anglican Communion, the subsequent Reformation and Iconoclasm of Western Catholicism turned out to yield a far more importable fruit the heady ecumenical decades of the 70s and 80s, apparently giving Papalist clergy what they'd wanted all along : a vernacular Eucharistic liturgy, expressed in the ASB and CW texts.

I have two main objections to this point of view. Firstly, there is an unhealthy distinction between the "externals" of worship and the "interiority" of the faith, with the assumption that those who cherished the externals spurned the Faith itself. Secondly, the attitude that Papalism has proven to be the magic ingredient that has kept the small flame of Anglo-Catholicism alive into the present day, and that it continues to be the guiding light of the movement.

On the both points, I concede that the Romanised Anglo-Catholic dependence on Ultramontanism for its self-expression was the reason for its dramatic death in the 1960s, as the "old ways" were markedly changed (at least inasmuch as the faithful perceived this "radical" change) and old certainties were eroded. However, I would also like to suggest that the reason why some of the most "extreme" and "fussy" Romanised Anglicans enjoyed any degree of success, and I have no hang ups in including the wealthy, largely White Anglo-Saxon congregations of places like S. Magnus (it its day) along with the famous but over-fetishised Slum Parishes (like Hoxton); is not so much because they espoused extreme liturgical Romanism and Ultramontanism, but because these places offered the fullness of the Sacraments, the fullness of the Liturgy, the rootedness in something authentically ancient and identifiably so, a true living School of the Faith. The Ultramontanism of these Parishes was certainly one factor in their decline; but their subsequent side-stepping of Vatican liturgical regulation in favour of asserting their own autonomy in matters liturgical under the authority of tradition is part of the secret of their survival. I have been to English Missal Masses at Hoxton (ergo not a strict 1962 celebration!), but I know far more about S. Magnus, where after years of increasing isolation and a liturgical regime of slack modernism, the Old Rite is flourishing and managing to find its feet again. We have learnt the lesson that good liturgy needs no special dispensation from the Holy Father, to whatever degree we accept his Spiritual Jurisdiction here in our little corner of the Anglican Communion. The prospect of an Anglican Ordinariate full of Anglican clergy bowed down under Roman liturgical law and so using the modern Roman Missal and the "liturgical Bonsai" that is the 1962 rite, has brought our cherished freedom into even sharper relief, despite our perilous position in the wider Communion. These days are for us an opportunity to explore that tradition, and I personally am coming to realise that the "fussiness" denounced by the Colin Stephenson generation is actually the beginning of a spiritual revival for our little group (small, but outward looking, intimate but not exclusive), where all around us is death and division.

Moreover, I hope we can steer clear of the label "traditionalist", which is bandied around so often by Forward in Faith circles, as if we were the same movement that in the Roman church cherishes the heritage of the Liturgical Movement and its "saints" Bugnini and Pio XII, abhorrs Vatican II and exalts Papal Authority. We are rather the "orthodox", who value the genuine authority of tradition, without wanting to go around harrassing gay rights activists and abortion doctors with it.

The new generation of orthodox Anglican seminarians, as well as their established faithful, are entering an era where the issue is no longer "Women Bishops", but whether or not to take the leap into the Roman Jurisdiction. They will need to decide how to live out the faith, or to pick up Stephenson's terms, which "externals" to adopt, in this new and uncertain territory, both inside the ordinariate and outside it. Is the only future for orthodox Anglicans under Roman authority? Is the alternative to submission complete division into various laity-lite bodies calling themselves "Anglican"? Is it possible that the Ordinariate will close the book on Anglican Ultramontanism? What and who will be left behind? I wonder if we're onto an answer....
Posted by ex_fide at 14:59