The Place of Chanting the Lessons at High Mass 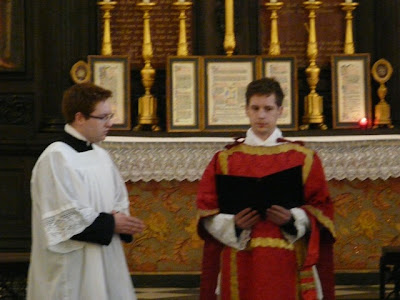 What you can see above is a typical image from a typical S. Magnus Liturgy, of the Subdeacon reading the Epistle of the Mass accompanied by the MC. Now Rubricists will balk at the dreadful disregard of Roman custom in a Parish that claims to practice the traditional Roman Rite in full. I do myself sometimes wonder how to justify this perhaps eccentric custom of having the Subdeacon sing the Epistle from the gates of the Sanctuary.

I refer frenquently as the Classical Roman Rite, by which I mean that developed rite which existed in regional "dialects" both within and without the immediate Central control of later Committees. I include under that term the Roman Rite properly called (i.e. the Use of the City of Rome) which came to be regarded as the normative, authoritative form during the Counter Reformation, as well as regional varieties of the same Liturgy which are now termed "Uses". This term necessarily includes various customs which were region-specific, and some of these customs applied to the place of reading the Epistle(s) at Mass. The Roman custom that is now regarded as the norm is that the Subdeacon, having reverenced the Altar stands some distance from it towards the edge of the Sanctuary (the South side) and sings the Epistle facing East, but as I will mention shortly, this custom is only an approximation of what happened anciently.

However, another question to consider is practicality. While the Rubrics of the Mass are supposed to safeguard the dignity of the celebration and to limit personal excess, they have historically not been an obstacle to considerations of practicality. Different churches have different shapes, some are large and some are small. I wonder where one would send the Subdeacon to sing the Epistle at the Crib Altar in the Grotto of Bethlehem!

One of my favourite photographs that I have on a bookcase at home is a black and white photograph of the ancient Roman church of Santa Maria in Cosmedin, whose portico hosts the famous "Bocca della Verita" or Mouth of Truth. In this photo the church is unadorned except for the altar furnishings: a frontal and six typically Roman tall candlesticks (last time I went in there there were two large electric heaters kicking around the sanctuary). I've always felt that the starkness and simplicity of the church's mouldings are off-played by the wonderful patterns of the marble and the warmness of the frecoes and the intimate, embracing form of the basilican schola. The present structure might not be the original, but it is certainly based on it. The schola structure also indicates where and how the lessons and gospels would have been read. On either side of the schola there is an ambo (which means simply "high place"). The one on the North side is reserved for the Gospel, while that on the South for the Epistle and Lessons. Originally however, there was only one. We read in the Catholic Encyclopedia:

Originally there was only one ambo in a church, placed in the nave, and provided with two flights of steps; one from the east, the side towards the altar; and the other from the west. From the eastern steps the Subdeacon with his face to the altar, read the Epistles; and from the western steps the deacon, facing the people, read the Gospels. The inconvenience of having one ambo soon became manifest, and in consequence in many churches two ambones were erected. When there were two, they were usually placed one on each side of the choir, which was separated from the nave and aisles by a low wall. An excellent example of this arrangement can still be seen in the church of St. Clement at Rome. Very often the gospel ambo was provided with a permanent candlestick; the one attached to the ambo in St. Clements is a marble spiral column, richly decorated with mosaic, and terminated by a capital twelve feet from the floor.

Where there were two or more ambos, one was used only for the Gospel. The common arrangement was that of an ambo on either side of the church, between the choir and the nave, as may still be seen in many old basilicas (e.g., S. Maria in Cosmedin at Rome, etc.). In this case the ambo on the north side was reserved for the Gospel, from which the deacon faced the south, where the men stood. The north is also the right, and therefore the more honourable, side of the altar. The ambo on the south was used for the Epistle, and for other lessons if there were only two. In the case of three ambos, two were on the south, one for all other lessons, one for the Epistles. This arrangement still subsists, inasmuch as the Epistle is always read on the south side (supposing the church to be orientated). Where there was only one ambo it had two platforms, a lower one for the Epistle and other lessons, a higher one for the Gospel (Durandus, "Rationale", IV, 16). The ambo for the Epistle should still be used in the Roman Rite where the church has one; it is used regularly at Milan.

From this history then, we can see that the custom of facing the altar developed from the use of one Ambo only. When churches without ambos became more common, and the Gospel was read facing north (i.e. without turning ones back to the Altar), this action was theologised as providing a link between the Liturgy of the Word and the Liturgy of the Eucharist (a division which deserves another post!). However, we also see that churches made their own arrangements according to the structure of the building, and that practicality ruled in reading to the faithful. We also get a sense of the importance overall of the "High Place" in reading both the Epistle and the Gospel.

Time to share these two photos. The first is from the Alcuin Club's reconstruction of Sarum ceremonial, and shows the Subdeacon reading the Epistle from the entrance of the screen, facing the people but also positioned somewhat to the South side of the entrance. This is more or less what happens at S. Magnus, minus the screen of course. 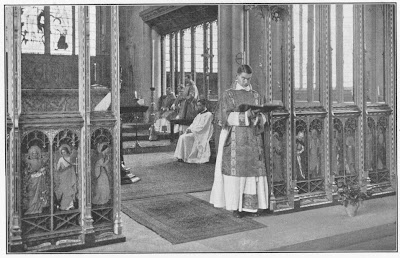 In this second photo, from a celebration of the Extraordinary Form of the Roman Rite (note, not Dominican rite) in Blackfriars, Oxford. You will notice the Subdeacon reading from the "Epistle side" of the Sanctuary but facing the people, not the Altar. 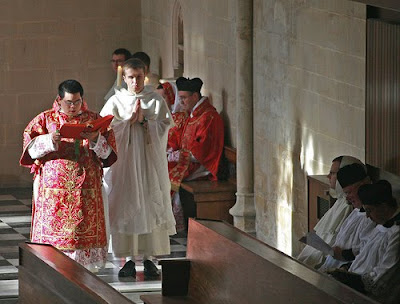 One of the worst features of the Modern Roman Liturgical praxis is that it perpetuates the false division of the "Liturgy of the Word" and the "Liturgy of the Sacrament". Through what is admittedly a little bit of retrospective theologising, the link between the two "halves" of the Mass is exemplified in the Roman Rite by the reading of the Collects at the altar, the Subdeacon facing East to chant the Epistle, and the Celebrant's reading of the Epistle and Gospel there too. It is therefore imperative for someone wishing to preserve the ethos of the Roman Rite to consider this link with the Altar when deciding to break free of Roman custom in the name of practicality.

However, in both of the pictures above, we can see that both the Altar and the "Ambo" are present in the Subdeacon's position. In the first, we notice that the Subdeacon is directed to remain just outside the screen, but still on the highest step. We need only think of the what the word "altar" means those whose rites involve an Iconostasis to realise that in standing where he does, the English Use Subdeacon has not really left the "altar" at all. He is also reading from an "ambo", a "high place", being elevated by some steps from the lowest level of the church. Exactly the same is true of the Mass at Blackfriars, where the Subdeacon is standing a step or so higher than those you can see in choir, he is also in an equivalent position to the basilican ambo whilst remaining within the Sanctuary of that church as it is configured.

We can see then that there is some legtimate latitude in the position of singing the Epistle at High Mass in the Classical Roman Rite. Looking at tradition and customs from across the West, we can discern that the two principles of the Ambo and the Altar are what determine the "correct" place from which to chant the Epistle and other readings. But, there is never any point in being too prescriptive without thought of circumstance : I'd love to hear suggestions of where the Subdeacon should go to sing the Epistle in the beautiful, multi-level church of San Miniato in Florence!