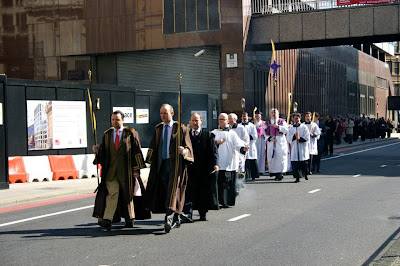 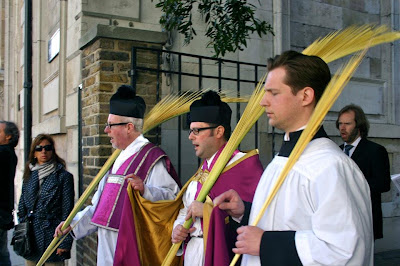 Readers of this blog will be interested to know that S. Magnus is still celebrating Holy Week according to the Older Rites of the Western Church. Since adopting these Ceremonies in 2010, they seem to have taken root in Parish life and we seem to be better at serving them. A full set of images of the Procession are available here.
Liturgists may be interested to know that the Solemn Blessing of Palms was carried out in full (minus branches of olive, mentioned in the prayers of blessing - sadly, local pizza restaurants have taken to guarding their al fresco planters quite keenly). Vernacular hymns were sung during the procession and All Glory, Laud and Honour was sung anitphonally with two cantors from inside the Church at the Entrance of the Cross. Sadly, the antiphon Ingrediente was not sung, which is perhaps something we can work on (there are many polyphonic settings which could be performed if the choir slipped into the Church before the Ministers. The Passion was sung by the choir, with the Deacon of the Mass singing Evangelist. The Passion was followed by the Passion Gospel as per the rubrics. The rest of the service proceeded as usual.
All of this, of course, is in contrast to the defective modern rites for Holy Week in the West, which reflect a profound lack of liturgical scholarship and understanding and represent a significant break with the tradition of the Church. There is the cumbersome and pointless introduction of the coffee-table of blessing facing the people (solemn blessings were always performed facing the Lord), there is the reconfiguration of the procession as triumphant celebration of Christ the King, rather than the sorrowful procession of Our Lord to the place of his Passion (I have always felt that holding a palm branch in the this procession occasions a profound self-examination - those who waved branches at the Gates of Jerusalem to welcome the Messiah were quick to wag their heads and mock Him on the Cross. This is lost in the new rite). All of these ceremonies are performed in Red vestments (including the tunicle and dalmatic -garments of joy according to the vesting prayers), and not in violet, the colour most associated with regality in the Roman liturgical dialect. Then there is, in the Pian reforms, the cumbersome change of vestments for ALL the Ministers into violet vestments for the Mass, and the deletion of the Prayers at the Foot of the Altar, which were formerly said at the beginning of every Mass.
I also attended a celebration of Tenebrae last night at the Church of S. Dunstan in the West. Although the service was curtailed somewhat, the essential form of the office was preserved, and I was able to put the service sheet aside and follow it in my extremely pukka and highly recommended Monastic Diurnal from the Lancelot Andrewes Press.
Two psalms were cut from each Nocturn of Matins, but the psalms which were sung were sung in full. This necessitated some clever distribution of the extinguishing of candles. However, commendably, nothing was cut at all from the readings or responsories, and so this part of each nocturn was delivered with full impact. The responsories are some of the most beautiful pieces of language in the office, and the repetition of certain phrases ("Better he had not been born" etc) is extremely haunting. Even better, the choir produced some of the 17th Century-onwards musical settings of these reponsories, including those by Victoria, bringing us some of the best music of the Triduum. Psalm 36 and the Miserere were cut from Lauds, with Allegri's setting of the psalm performed at the end. The High Altar is some distance from the wall, and so the last candle on the hearse was hidden in the proper place and the light switch was flicked off after the collect Respice, giving great effect to the final ceremonies.
All of this made me wonder why more places don't offer Tenebrae. The ceremonies are so simple, and the opportunity for elaborate music are so broad that it must surely appeal to most catholic Anglican clergy. The only issue one might encounter is a general intolerance among Anglicans for long services (full Tenebrae with singing would come in at around two hours). It would be a good thing if clergy could take the lead, however, and express a little more confidence in "long services": frankly if a healthy, youngish person is unable to cope with a mere two hours of worship on the most solemn days of the Church's year, perhaps they ought to find a less vigorous and demanding form of religion - like atheism, or armchair Wicca.
And so I wish you all a very Blessed Triduum and, when it comes, a Joyful Pascha. Wherever you are, whatever liturgical heteropraxis you must endure, I hope that in some way you will be able to enter fully into the mystery of these three days and, as the the Church has always intended through Her Sacred Liturgies, to participate in some way in Our Lord's Passion, Death and Resurrection.
(Comments are welcome, but the opinionated rants of the liturgically ignorant will be deleted.)
Posted by ex_fide at 10:27