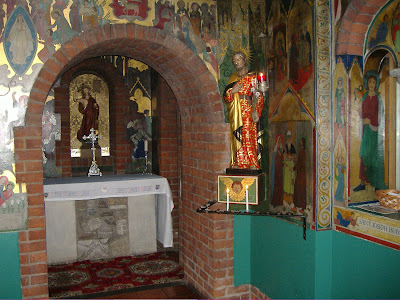 One of my favourite places on earth is the chapel of S. Joseph in the shrine Church at Walsingham. It's slightly cramped, the light there never lets you take a good photo, and I believe the shrine hoover is stored behind a curtain at the back of the Chapel. The reason I like it so much, I think, is because on first entering it I experienced an extraordinary sense of deja vu. A few years before, when I was perhaps a month or two old in the faith and still not a confirmed or commincant in the Church of England, I spend three days at the monasteries of Wadi Natrun, the ancient Scetis of Egypt. Staying at the Paramos monastery, I woke up with the bell at 3.40am and practically crawled from the guest house, through the narrow gate into the old monastery complex to the old church. The monks had started Matins and were chanting away in Coptic (monks who can't cope with the Coptic language and visitors with the same weakness are encouraged to attend celebrations in a church opposite the guesthouse). I hung around at the back of the church without a clue what was going on, unable to see much action behind the pillars and screens that separated the monastics from the non-monastics from the laity from the unbaptised from the Anglicans. In a mood to explore, I followed a short passageway into a space that as far as I can remember was pretty much the same size at the S. Joseph chapel in Walsingham, except instead of an altar there was a large icon and reliquary of S. George, and behind the curtain was an altar rather than a hoover. I must have stood there rooted to the spot for over an hour, because by the time I came out the monks were lighting incense for the morning offering and Liturgy and the sun was coming up slowly. I stood looking at the icon pouring out all the prayers of a lifetime of no one to tell them to. I didn't cry, or feel anything dramatic, but my heart was open in prayer and I felt wholly within God's presence. It wasn't until afterwards that I came to realise what had happened, that in some way I had heard God's voice confirming me in my Christian vocation and that where I was and where I was going, He had led me there. I can't imagine what the disciples on the road to Emmaus felt like when they realised what had happened, but it must have been quite similar. Maybe in the midst of their relief and joy at seeing Jesus they felt a sense of frustration, that they'd wasted those moments talking to Him because they didn't know who he was. That intimate presence couldn't just be conjured up again at will, they couldn't just call him back and he'd appear like some sort of friendly ghost, but nonetheless, it was a gift of God, a sign, an encouragement that they would carry with them forever. Most of the collects in Anglican books today include a reference to being fed or given some remedy by God, which made me think back to those moments in the monastery chapel and in Walsingham. There's no switch I can flick to access that sense of peace and tranquility, that sense of the intimate, personal presence of Christ. Still, I can always immerse myself totally in the Liturgical Life of the Church, so full of joy and renewal this Paschaltide, so that I, like the disciples, might know Him daily in the breaking of the Bread.
Posted by ex_fide at 23:41