I love my Monastic Diurnal! 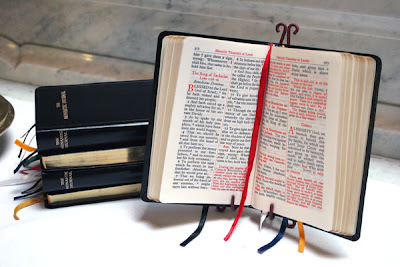 No book has ever been with me so constantly. Admittedly there are times when I leave it at home, and there are times when I carry it with me but don't open it. Still, I feel naked without it. In the 6 months that I've owned my copy of the Monastic Diurnal, a Lancelot Andrewes Press reprint of the Oxford original, the book has become so much part of my life that I feel compelled to extol its virtues in the blogosphere, and encourage others to get hold of a copy of this wonderful book - you won't regret it.
When I needed to follow a service of Tenebrae at S. Dunstan's, I picked up my Monastic Diurnal, whenever I wish to pray the Office of the Dead as a votive, whenever I need the Litany (printed with the 7 penitential Psalms), whenever I set out on a journey I have the Itinerarium to hand, whenever I need the traditional order for Confession, for the classic prayers of Preparation for, and Thanksgiving after, the Holy Eucharist, should I ever find myself at the bedside of a dying man or women and in need of the prayer for the Commendation of a Soul - all of these needs are met in the Appendix of this little book. The majority of the pages, however, are taken up by the Psalter, arranged according to the ancient prescriptions of S. Benedict in his Holy Rule, composed in the 6th Century AD. As such, this Psalter represents a more authentic distribution of Psalms than can be found in many Office books (especially after Pope Pius X picked up his shears) and to follow this order places you in the same line as countless Benedictine saints throughout the ages, for whom the Psalms formed the backbone of their daily prayer.
The Diurnal contains all the hours of the Monastic daily office except Matins (a companion volume for Matins is available from the same press), and as such is a perfectly portable volume on which to base a modest daily prayer rule. For users, there is a website with tutorials, crib sheets and general advice. The original edition of the Diurnal was the office book of choice for a number of Anglican religious orders in the Benedictine tradition in the first half of the 20th Century, who preferred to say all 7 daily "hours" of prayer rather than the two mandated by the Book of Common Prayer. This Diurnal uses the classicand memorable Coverdale Translation of the Psalms, placing it firmly within the Anglican tradition. At the same time, this reprint has been issued largely for the benefit of Antiochian Orthodox Christians of the Western Rite, for whom it has been blessed by Orthodox Bishops for use in Western Rite parishes and monasteries.
For a small book, it's not dirt cheap ($55), but the binding has survived 6 months of abuse. It is printed on very fine "bible" paper, so you'll probably want to keep it in some sort of protective covering. If you don't pray the office (and I only do now with shocking irregularity), or if you are looking for a more Traditional form, I can't recommend the Monastic Diurnal enough. For me, the only stumbling block was that the Marian Antiphons are arranged to fit the plainchant melodies, so instead of "Joy to thee, O Queen of Heaven" you have "O Queen of heaven, be joyful" to fit "Regina coeli, laetare". Still, I suppose the only thing to do is to join the saints of ages past and start singing, instead of simply reading, the Divine Office. The LAP also publish a noted edition of the Monastic Diurnal, which I'm dying to get my hands on.
Perhaps best of all, use of the Monastic Diurnal is almost guaranteed to upset Protestant agitators. One day on the tube to Heathrow I decided to whip out my Diurnal and say some of the Hours. When I'd finished, the lady next to me asked which translation of the Bible I was reading because it looked odd. I told her I was using the Monastic Diurnal and showed her some of the pages. When she asked me whether the Suffrage of the Saints and Commemoration of the Cross at Vespers were "suggested prayers", and I replied that they were in fact obligatory, she admonished me most severely about my obligation to read the scriptures daily, and wouldn't be convinced that a daily diet of Psalmody and Short Chapters from the Divine Office was sufficient to keep me in true faith. I didn't want to boast too louldy or proudly about the fact that I have a well-thumbed Gideon's Bible on my nightstand, so I withdrew. Frankly, if it was good enough for S. Benedict.....
Posted by ex_fide at 22:55