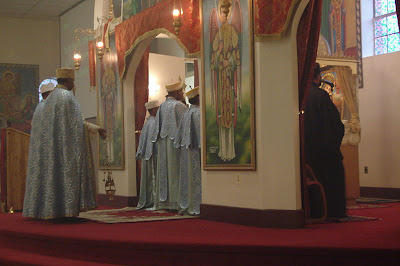 (Picture from Wikipedia)
I don't have much time to linger on Liturgical blogs these days, alas. Whenever I do look at RC tradworld blogs, however, I do notice one feature of tradworld liturgies that irks me: the practice of priests serving the Liturgy not as priests, but rather as Deacons and Subdeacons. I've also been reading a little about the Ethiopian rite of the Divine Liturgy and tradworld vs Ethiopian Orthodox is quite a contrast.

Reading tradworld rubrical guides, new and reprinted, one often sees instructions to the effect that Priests may carry out the functions of the Deacon or Subdeacon at Mass, or similar. In the Latin rite, a layman may fulfill the functions of the Subdeacon, with certain restrictions, of course, on what he can wear and do. This raises several important questions about how the Western Church "does" Liturgy: Are we saying that the rite is inherently defective, because it puts into vestments a person (the Subdeacon) who needn't be ordained to fulfill that office? Why is it that under current rules, both an ordained priest and a layman can serve as Subdeacons at the Liturgy? Does that make sense? Is there supposed to be a sharp line between clergy and laity, and which side of the Minor Orders does it fall on?

At the Ethiopian Liturgy, one will find at least five (seven is canonically correct) ministers: The Celebrant, the Assistant Priest, the Deacon, the Subdeacon, and the Lector, to which Fanbearer and Acolyte are added to make up the canonically required seven. A Priest assists, but he does so as an Assistant Priest. There is no notion of "demoting" him to the rank of Deacon for the duration of the liturgy.

Western practice begs the question, what actually is the Priest-Deacon? Is he a just a Priest in Deacon's clothing? If he is, why does he receive Communion with his stole tied inappropriately, or if he's acting as Subdeacon, not at all? The inconsistencies that arise, where the Priest in choir is expected to receive Communion in a stole, but the Priest-in-Tunicle isn't!

Another major question is that of the relationship between Office and Liturgical Function. My understanding of Orders, starting from scripture and going on to the Fathers, is that each clerical order has both an Office and a Function. In some cases, the liturgical function overlaps a little: Bishops and Priests both celebrate the Liturgy, Subdeacons and Lectors (formerly) both chant Readings. Yet, their respective offices are not precisely the same. Is it right then, for a priest to temporarily relinquish his proper function to fulfill that of another minister, or for a layman to usurp the liturgical function proper to a Subdeacon?

This might all seem like so much splitting of hairs, and shying away from providing real answers. But comparing the Ethiopian and Latin-rite practice reveals the massive gulf between how East and West project their own notions of convenience onto the Liturgy.

Convenience does matter, though. In my church, I'm used to priests acting as Deacons. We don't have a Deacon affiliated to the Parish, and when one visits, he acts as Deacon. Luckily though, I don't think I've ever seen a Priest act as Subdeacon in the Parish (which must be one of the worst liturgical solecisms ever!). The rotation of lay servers in this role is perhaps not the ideal, but is certainly better practice than using a priest, and approaches at least a "simulation" of ministers in minor orders. And to my mind, the minor orders are the answer to this problem. That and the promotion of the Diaconate. One of the good things (but possibly the worst named) to come out of late twentieth-century mucking around with the Liturgy is the revival of the "Permanent" Diaconate, individuals who are ordained as Deacons to fulfill the Office of pastoral care and teaching, and the Functions of the Deacon at the Liturgy. Surely that is the first step in achieving an understanding of orders that chimes with scripture and tradition.
Posted by ex_fide at 12:36