More on Deacons, and Maniples 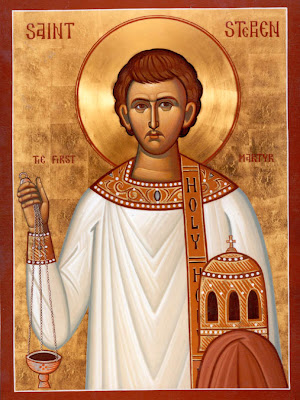 More on the subject of Deacons, and more specifically the question "Is a Priest a Deacon?" which has been exercising my mind over the last few days.

I broached this topic with an Anglican clergymen that I met when he was a recently ordained Deacon and who is now a Priest. He said that yes, he was a Deacon. One sign of this is the Priest and Bishop's use of the Maniple, which has its origins in the towel carried by the Deacon. A quick glance at the Catholic Encyclopaedia, which I tend to believe and trust, seems to contradict this, however. The origin of the Maniple is supposedly in a small mappa, or handkerchief which was ornamental and rarely put to actual use, and was carried by anyone of high rank in the left hand. The evidence for this is found in the peculiar use of this vestment by the Bishop who is handed His Maniple to wear at the prayer Indulgentiam in the Mass, while other clergy put theirs on before Mass begins. The Maniple, then, has as its origin a sign of status, rather than service, although the modern Maniple could well be a conflation of the ornamental maniple with other, more practical cloths and towels employed by clergy in the service of the Altar, the Deacon included. Furthermore, along with the development of the Subdiaconate as a Major or higher Order, the Maniple came to be given to the Subdeacon at his ordination, placed on his arm by the Bishop himself, almost as a sign of his inclusion in the higher ranks of clergy. Additionally, the analogous vestment in the Byzantine rite, the epigonation (that hangs from the cincture) belongs only to the Bishop (and there exists an exclusively Papal version in the West). The other possible analogy, the epimanikia, are ornamental cuffs worn by Bishops, Priests and (strict) Deacons.
This is quite a diversion from the actual question "Is a Priest a Deacon?" which the Roman Church logically affirms, since She teaches that Ordination produces an indellible mark on the soul: a diaconal ordination cannot be undone, and diaconal orders are not revoked. It seems to me that a mythology of this gradual acquisition of Orders (indistinct from Office) has been projected onto the Liturgy, which is why Catholics can say a Bishop is Priest, Deacon and Subdeacon when vested in Chasuble, Dalmatic and Tunicle at the Liturgy.
My assertion is that in the West, there has traditionally been a distinction (now lost) between Orders and Office, which comes out in the oldest forms of Ordination rites. The "possession" of certain Vestments by certain Orders is also false, generating an ecclesiastical version of secular "insignia", but probably stems from the idea that as a clergyman ascends through the Orders, he retains their proper Offices and therefore some visible sign of them. If that is true, why do we have Mitred Abbots (who are not in Episcopal Orders) and Deacons and Subdeacons in Folded Chasubles (evidence that the planeta was not originally only a Sacerdotal vestment)?
My feeling is that this conflation of Orders and Offices in the West, and all that comes with it, has been had overwhelmingly negative effect on Western Liturgy: the virtual suppression of the Diaconate, making the Office of Deacon a temporary state from which one will almost invariably proceed to be Priested, and in any case not an important office at all, since all functions can be fulfilled by a Priest; the actual suppression of the Subdiaconate and Minor Orders in our own time (regardless of their antiquity) and, finally, the evolution of the "Server" as an ambiguous category of person occupying the borderland between clergy and laity and therefore quite unregulated and uncontrollable. Given all this, it hardly surprises me when I see Romanized Anglican "Priest-Deacons" forget the rules and kiss the Gospel Book at a Pontifical Liturgy: they simply don't know what they're supposed to be doing, and in most cases, as long as there's incense and pretty vestments, they don't even care.

The first time I opened a Pontifical, I couldn't believe what I was seeing: all the Ceremonies and Rites for instituting and ordaining every category of clergy you would ever need (and some you might think you don't), and blessings for pretty much every eventuality. These rites are effectively dead to most of the Western Church, which is a shameful neglect and rejection of our very anchor in the Faith. When will we learn that we have to let the Sacred Liturgy, that great repository of Tradition, teach us what to do? When will we stop projecting our own superstitious symbolism onto the Liturgy, and hacking away at its integrity with our own confused notions of what is "permissable" or "convenient"? The moment we start constructing the Liturgy (or a Liturgy) around ourselves is the moment when we start making up our own religion, and after that, there's just no point.
Posted by ex_fide at 09:49