The Office of the Dead - Absolution 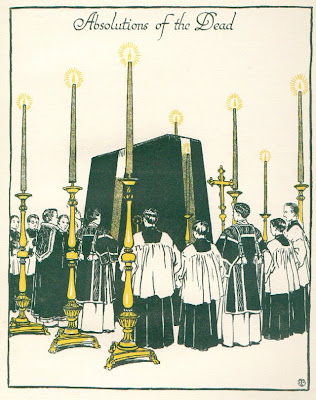 Perhaps prompted by the service of Solemn Vespers of the Dead which will be sung at S. Magnus tonight, I've been considering that part of the Office of the Dead that normally follows the Mass: the Absolution. This ceremony is interesting to me for two principle reasons: firstly that the same rites can be carried out whether a body is present or not, and secondly because the presence of a Subdeacon with cross, and more specifically, the Subdeacon of the Mass, lends this ceremony to comparison with other rites in which this configuration appears: the Procession of Palm Sunday and the Procession of Candlemass.

In previous posts, I've written about the "language" of Liturgy and how the use of certain prayers, vestments and liturgical colours and actions in the Roman rite form a structured discourse, not unlike a human language, which discloses meaning and "makes present" Christ's actions and attributes in the Liturgy. It seems to me that one can speak both of Christ's Sacramental presence in the Eucharist and His Liturgical presence in rites of the Liturgy (making sense of the ceremonies of the Gospel reading in the Mass etc).

We know that the Processions of Palm Sunday and Candlemas are a liturgical re-enactment, or making present, of events in the Gospel. In the case of Candlemas, the Presentation of Christ is enacted by the arrival at the Sanctuary gates of the Cross, born by a Subdeacon, while a description of the prescribed sacrifice is sung by the choir. On Palm Sunday, the Cross is again used a type of Christ and is processed among palms and hymns before arriving at the Church doors, the Gate of Jerusalem, where the Subdeacon knocks on the door with the Processional Cross, and those outside and inside the church begin a sung dialogue of Praise and welcome.

What then, is being made present in the Absolution of the Dead? Well, as with the two examples above, the clue is in the prayers recited and the configuration of the Subdeacon and Cross. In this rite, the procession forms essentially as at the other Celebrations, the Subdeacon and Cross with Acolytes either side and preceded by the Thurifer, and the Subdeacon goes to stand at the head of the Bier. This is clearly important because the Subdeacon will be facing the Altar in the case of a layman or empty bier, or facing West at the Bier of a simple Priest or Bishop. The link between the Cross and the head of the Deceased is important. The rites begin with the Priest Celebrant facing the Cross, wherever it be, beginning with:

ENTER not into judgment with Thy servant, O LORD, for in Thy Sight can no man living be justified. Judge him not therefore, O LORD, whom the prayers of the faithful commend unto Thee, but of Thy mercy let him who, when alive, was signed in the Name of the HOLY TRINITY, escape Thy just vengeance. Who livest and reignest, world without end. Amen.

If there be a body present, this prayer is followed by the singing of the Libera Me:

Incense is imposed and blessed, and the Kyrie Eleison sung antiphonally by one side of the choir, then the other. The Celebrant then intones the Pater Noster while aspersing and then censing the Bier. The Priest, significantly, is instructed to bow low when passing the cross, while the Deacon genuflects, meaning the Cross, in common with Palm Sunday and Candlemass, is a liturgical object that has been invested with Christ's symbolic, liturgical presence for the sake of this re-enactment. There follows a collect:

O GOD, Whose nature and property is ever to have mercy and to forgive, receive our humble petitions for the soul of Thy servant N., which Thou hast commanded to pass out of this world: deliver it not into the hands of the Enemy, neither forget it at the last, but command it to be received by Thy holy Angels, and to be carried into the land of the living; and, forasmuch as he hoped and believed in Thee, let him be counted worthy to rejoice in the fellowship of Thy Saints. Through our LORD JESUS CHRIST, Thy SON, Who liveth and reigneth with Thee in the Unity of the HOLY GHOST, GOD, for ever and ever. Amen.

ABSOLVE, O LORD, we beseech Thee, the soul of Thy servant (or handmaid), N., that though dead to the world, he may live to Thee; and whatsoever he hath done amiss in his human conversation, through the weakness of the flesh, do Thou by the pardon of Thy most merciful loving-kindness wipe away. Through CHRIST our LORD, Who liveth and reigneth with Thee in the Unity of the HOLY GHOST, GOD, for ever and ever. Amen.
So what is being enacted here? The prayers here share the common theme of begging mercy from the Almighty, the pardoning of offences at the general Resurrection, with Christ sitting in judgement. However, as we well know, this is a future event alluded to in the Gospel, not an historical event that we can re-enact. Could it be then, that this ceremony is a shadow of the Judgement to come? The image is quite clear: Christ at the head of the deceased Christian, who is surrounded (quite literally here) by the prayers of the living. The clergy are directed to hold lighted candles for the absolution, as at Candlemass and Palm Sunday, signifying the active participation of those present in the Liturgical action. Nonetheless, this is not strictly a "re-enactment" of the Judgement, but rather an illustration of it, perhaps more aptly, an "ikon" of the Judgement. A comparison springs to mind in the ceremonies of the Paschal Vigil, when the Lumen Christi procession is made by the Deacon in white vestments through a dark church, where the ministers and Altar are still dressed in Violet. One cannot say where in this Vigil the Resurrection is actually "enacted", although there are allusions to It throughout the beginning the of Vigil.
My thesis would also be that the Ceremony of Absolution could also be interpreted in light of the Descent of Christ into hades, if only because the Libera Me evokes this, and because of it is represented in the Byzantine Liturgy of Holy Saturday. For example at the Midnight office, a procession is made around the Church with the new Paschal flame-lit candles, while the Church inside is decked for the Feast. The Priest knocks on the church doors with the Cross (not unlike Palm Sunday) and begins a dialogue with a "voice of Hades" from inside the Church, which are then flung open to symbolise the gates of Hades being destroyed by Christ.

Perhaps because the enactment of this event is not explicit in the Roman Paschal liturgy, I can't help wondering of there is something of the Descent in the ceremony of Absolution. The Descent was so prominent in Patristic teaching during the early formative years of the Roman Rite, and there are ceremonial aspects in it which could relate to Byzantine practice - I'm thinking particularly of the Pall-like Plashchanitsa (shroud depicting the dead Christ) being moved from the Sepulchre to the Altar of the Church, the Procession that follows it. The Catholic Encyclopaedia says of the Libera me: "This is one of the few texts in the Roman Liturgy alluding to Christ's into hell. It is also a very ancient composition". All of this opens the possibility that something of the Descent that was originally part of Roman or other Western Paschal Liturgies got transferred to the Office of the Dead. I'm very keen to hear readers' views on this.

My final point is this: One must never underestimate the doctrinal core of the Sacred Liturgy. I have often discussed Liturgy as analogous to language, and like language, the Liturgy is also a medium of instruction. If one were to draw a diagram of Catholic theology on Prayer for the Dead, it would probably look very much like a plan-view of the Absolution ceremony: the dead are surrounded by the prayers of the faithful; a priest pleads before Christ the Head on their behalf and offers prayers beseeching Absolution. The Dead are honoured by the presence of mourners with candles, their physical remains, or their "ikon", are censed and lustrated etc. The Sacred Liturgy is effectively the language of our Salvation: it discloses to us the very essence of our Faith, and allows us to live the Gospel and to live "in" the Gospel, as Christ is made Sacramentally, Liturgically, figuratively present to us. This is the brilliance of the Old Rite, and this brilliance is lost the moment we start assenting to commitee religion and bad, spurious, invented liturgical practice. To those who continue to flog a dead horse: the Modern Roman Rite, Common Worship, the so-called Extraordinary form of the Roman Rite, anything that represents a serious and damaging breach with Traditional practice: what they are affirming in the name of obedience to the Pope, or preference for modern language, or whatever, is a total ignorance of, and lack of concern for, the richness of the Traditional Liturgy. This just isn't right.
Posted by ex_fide at 10:54