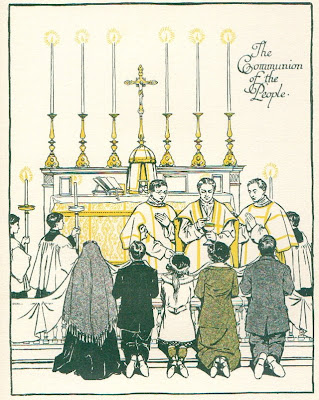 I hope that a good Ascension Day was had by all. Whenever I hear the word ascension, the first image that pops into my mind is the Ascension chapel in the Shrine Church at Walsingham, of that little moulding on the ceiling of two feet taken up into cloud. The reredos of that chapel is gilded wood and the impression is one of movement upwards, guiding the heart to what is above, beyond the low ceiling of the chapel to the heavens above, where Christ reigns in glory.

I love the Ascension, because it’s imagery and readings are so physical, so personal. Just like Christ showing his wounds to the disciples, and inviting them to touch them, the Ascension was a tangible, real event, with the resurrected body of Christ on full view. Like Easter, the Ascension is also the fulfilment of a promise, and invites us to trust in Christ, and to be a friend to Him.

At S. Magnus, we kept the Feast with an evening Low Mass from the English Missal. Although every Sunday we use the Anglican Missal for Solemn Mass, we do not employ all of the ceremonial of the ‘Western Use’. However, during Lent, we started offering Low Mass from the English Missal and celebrated precisely according to the rubrics of the rite. This has meant many hours poring over Fortescue’s Ceremonies of the Roman Rite Described, specifically the 1958 edition which corresponds to our edition of the English Missal. I’ve also spent hours on youtube and google video watching recordings of Masses celebrated according to the 1962 Missale Romanum. As a server, I’ve also availed myself of countless small booklets and guides to serving the Tridentine Mass, and I often wonder why the information doesn’t stick in my mind, especially since most of those guides were written for children of about twelve years old.

So far, this has been a success. Although I do panic slightly before Mass that I might forget where I am supposed to be at a certain point, or that I might mess up the ablutions or miss a response, but yesterday’s Mass was very moving, especially as we were lucky enough to have a member of the choir chant the Introit, Kyrie, Gloria, Gradual, Offertory and Agnus Dei unaccompanied. It is very humbling to know that the prayers of the canon are the same prayers, unaltered over the ages, as were uttered by S. Augustine when he said his first Mass in England, and humbling too to know that this rite is the one with which so many of the saints would be familiar. It is truly the Mass of Ages, the unique heritage of the Church.

We all know that the Tridentine Rite of the Roman Catholic Church is increasingly in demand these days, but in our own Communion, the interest in ‘traditional liturgy’ has been somewhat more vaguely attached to the general visual aspect of the Liturgy, the indices of Anglo-Catholicism for the uninitiated: Birettas, incense and that sort of thing. Still, it seems there are plenty of people who are interested in doing things properly, and appreciate the timeless and transcendental quality of the Old Rite, offered with the complete and correct ceremonial directed in the rubrics.

It has long seemed to me, especially since a post on Anglican Wanderings about the use of the American Missal in Nashotah, that we would benefit greatly from an Old Rite Society, parallel to something like the Latin Mass Society, to promote the use of the various Anglican Missals (without preferring any particular one) and to provide listings of Old Rite Masses offered regularly or on Solemnities. You’ll notice I’ve been using the term Old Rite quite vaguely, and it’s basically a catch-all term I’ve settled on. I think the term Usus Antiquior belongs specifically to the Roman Missal and Extraordinary Form belongs to the Roman Communion. Our Missals are a much more diverse grouping of books incorporating various amounts of the Book of Common Prayer, which as we know, exists in various manifestations in different parts of the world. Still, what I believe constitutes an Old Rite Missal, is anything based on or translated from the Roman Missal in its various editions between 1570 and 1962 and incorporating any amount of Sarum or BCP material. I suppose that would include, apart from the Missale Romanum, which I know some people use, the English Missal, the Anglican Missal (published by the SSPP) and the American Missal among others.

To that end then, I would like any priests who offer public masses according to any Old Rite, or people who know of such celebrations, to email me Mass times to be published every Thursday or Friday (for the weekend) and at least two days before any Feast or Solemnity. I know of some parishes in the US who regularly use the English Missal, and I know of one in the UK, but please help by letting me know who I can contact for confirmation before advertising the Masses.
Either post the regular Mass times in the comments box of this post, or email me if you know of a particular celebration coming up. There are many people who would love to attend an Old Rite Mass, but who simply don’t know which parishes offer them, so with your help they’ll be able to attend the Traditional Liturgy as they wish.
Posted by ex_fide at 11:26