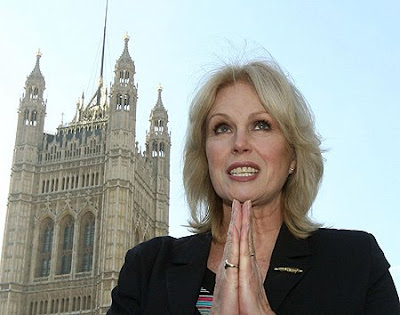 I'm really enjoying watching Joanna Lumley on the news these days. Her campaign work on behalf of Gurkhas whose appliations for settlement in the UK have been rejected for the government seems tireless. In her numerous television appearences and interviews, she comes across as tenacious, focused, compassionate and incredibly posh. Her turn of phrase, when talking about her campaign, always offers a sense of urgency, touched by a flair for the dramatic, such as when she described the PM, seemingly without irony, as the "leader of our nation".
The sight of Joanna Lumley crouching next to elderly Gurkhas in wheelchairs and saluting them with palms pressed together while tabloid photographers snap away, coupled with her announcing such things as "We have to believe in this. This is all we've got to believe in. We wish this campaign was over now" might sometimes look like one of her performances, but that's just Joanna Lumley. In truth, she's done an awful lot to raise the profile of an injustice, an inconsistency in the system, that disadvantages relatively few people and would normally never receive so much attention. It is totally unfair that Gurkhas shouldn't have the same settlement rights as Commonwealth soldiers, and what part of the public has objected to the idea of settling a handful of ethnic Nepalese in Britian? But who else would be fighting their cause right now? One of the best things about the campaign is that it has caused Joe Public to actually think about our immigration laws, and to question the fairness of criteria for settlement in the UK. By providence, Joanna Lumley has managed to wade into meetings with the PM and the Immigration Minister at a moment when the government is severely diminished in the eyes of the Public. When she was interviewed with minister Phil Woolas about the outcome of their meeting, the narrow look of mistrust and frustration in her eyes really reflected a mood that is felt nationally.
I love watching Joanna Lumley's activism on TV and I hope and pray for a good outcome for the Gurkhas. As for New Labour, I'd like to see MPs doing unpaid community work, wearing orange hi-viz vests inscribed with "I was rude to Gurkhas".
Posted by ex_fide at 07:54