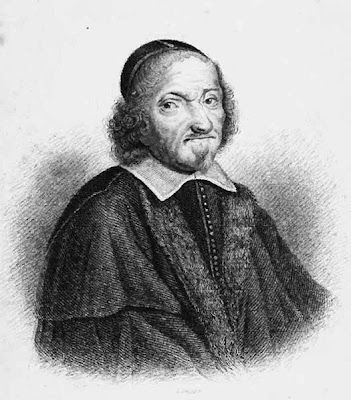 As anyone who has visited the church of S. Magnus-the-Martyr will know, the South-East corner of the church is home to the Shrine of the Pietà , the Altar of Christ the King, a Flemish Baroque aumbry and the final resting place of Myles Coverdale, the Great Reformer, Protestant hero, one time Bishop of Exeter and translator of the first complete Bible into the English tongue.

Over the years since the removal of Coverdale’s remains from the now-demolished S. Bartholomew’s to S. Magnus in 1840, the incongruity of his interment in one of the most ultramontane parish churches in London has been the subject of numerous anecdotes. One story is as follows: After singing a High Mass one Sunday morning, the venerable former rector of S. Magnus, Fr. Fynes-Clinton was met in the narthex by a group of Protestants who had come to see the monument to the Great Reformer who translated the first complete English Bible. “How interesting!” remarked Fr. Fynes-Clinton “We’ve just said Mass in the language out of which Coverdale translated the Bible”. Our Parish guide also notes that “a mitre, the bishop's ceremonial head-gear, is shown on one monument. Coverdale had scruples about the wearing of vestments and when Parliament enforced stricter observance of the liturgy he was compelled to resign from the living of St. Magnus”.

So, I was delighted to be told about a short pamphlet published shortly after the translation of his remains to S. Magnus entitled A Correct Account of the Exhumation of the Remains of Myles Coverdale from the Chancel of the Church of St. Bartholomew… which was unearth from the British Library collections by a member of our PCC whilst researching City churches. The author, N. Whittock, describes in detail the process of exhuming the bodies buried beneath the chancel of St. Bartholomew’s in anticipation of its demolition.

The whole process is invested with great importance by the author, and the body of the “great Father of the Reformation” is treated almost as a saintly relic. He wrotes “as the body of Myles Coverdale, Bishop of Exeter, was buried here in 1568, several gentlemen has expressed a desire to be present when the ground was opened, to ascertain if any remains of this great Father of the Reformation could be found.” The gentlemen were not disappointed. After finding the more recently-buried body of a Mrs. Nusum almost entirely decomposed, and carting away “as many as six baskets” of bones from around the Rector’s Vault, the gentlemen were inclined to abandon hope “of finding any remains of Coverdale, but all seemed anxious to discover them if possible; the labourers themselves were evidently interested in the search”.

The mood of devotion surrounding the operation of exhuming Coverdale strikes me as an expression of an almost Catholic piety. Surely the reformed Christian is liberated from the cult of the saints and their relics. But then why write the book? The workmen eventually find the remains.

“An instrument called a searcher, used for boring the earth, was now employed, and in the centre of the chancel the workmen found the searcher strike against a hard substance about two feet from the ground he stood upon. As this was the precise spot where, from tradition and circumstances, we were led to expect the body we were in search of deposited, the excavation proceeded with increased care: and lest the coffin should be injured by the spade striking against it, a great deal of the earth was removed by hand. After digging to the depth indicated by the searcher, the spade struck against the thigh bone of a skeleton, and so sharp was the sound that we all considered that it had struck a stone coffin; on the removal of the earth by hand, the only perfect skeleton we had discovered was seen, the form of the coffin could also be traced, it appeared like a dark red line surrounding the bones, the lid of the coffin and the earth having fallen in upon the body, it was necessary to clear away the earth before the whole of the skeleton could be seen ; the scull alone was decomposed, which was accounted for by it having fallen upon two large lime stones, when the bottom of the coffin could no longer contain it.”

Are we to believe what we read? The sharp sound of a spade on thigh bone…the only perfect skeleton in tomb of decomposed bodies? Are we to understand that the remains of Bishop Myles Coverdale were found in a, dare I say it….state of incorruptibility? Should we assume that, for all his work for the Reformation of the Church, it turns out that the Bishop Coverdale only had one Protestant bone in his body – his skull?

The account continues over the four days of the exhumation, and the remains of Coverdale are left in the vestry of St. Bartholomew’s where “a great number of persons came to see the skeleton”. The account closes, making references to the “venerated remains” and offering thanks to those involved with typical Victorian approbation: “No oaths or unseemly observations were used by the workmen or labourers; each performed the task allotted to him with a decorum highly gratifying to all that witnessed their exertions.”

Seen as (Blessed) Myles Coverdale is “venerated” by Protestant visitors throughout the year, and since we now have this evidence of a possible case of “miraculous” incorruptibility, I wonder if it isn’t time to renovate his tomb at S. Magnus as a shrine. I have in mind droves of pilgrims filing past his remains such as happens with Padre Pio or the Cure d’Ars, and short of exhuming him, kitting him out in a Geneva gown and laying a Coverdale Bible on his chest, we can at least hope that his tomb becomes a site of pilgrimage for Protestant Anglicans, whereat they might come to appreciate the grace of God made manifest by the witness his many, different saintly servants.
Posted by ex_fide at 17:30