Apostle to the English 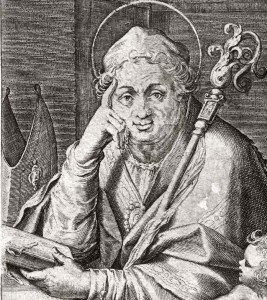 Form English Missals to English weddings and now to the Apostle to the English, S. Augustine of Canterbury. On his Feast Day, it is fitting to reflect on the consolidation of Christian England by that great mission from Rome. It is also fitting to examine ourselves, and determine how faithful we have been to that witness. 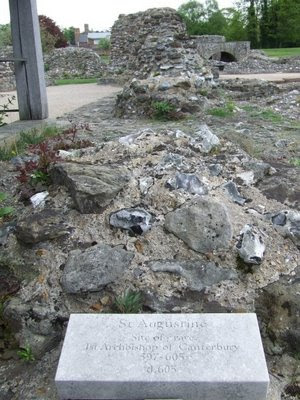 This is what the Church of England looks like, the stump of a stone column that, for nearly 1000 years, supported a grand and elaborate structure. Founded by S. Augustine himself, and later named after him, the abbey of which this column is a part was cherished by the successors of Augustine, expanded and built upon until a majestic complex of buildings developed, with many chapels, grand and small, where Christ was offered on the Altar of the Lord, and His Body given in Communion to His faithful bride, the Church. The abbey established itself in the community, and life without it became unimaginable. The main function of the abbey was to bring Jesus Christ to the people, in the rigorous daily cycle of prayer, and in the Sacraments. Its witness was local, but it testified to the universal, and it enjoyed continued union with the Apostolic See of Rome, the root from which it sprang. Thanks to this rootedness, the abbey was able to take its place in the evolving landscape of the city of Canterbury. When the shrine of S. Thomas Beckett became a site of international renown, attracting pilgrims from across Europe, the abbey had no need to see itself as a competitor, but rather as a partner in living and proclaiming the Gospel, and it continued to faithful witness.

When the abbey was dissolved, however, all of this changed. The monks were laid off, their intercessory prayer no longer deemed valuable. The altars were stripped, the precious stones and gold that covered the shrine of S. Augustine, votive offerings made to the glory of God, were taken away. Part of the site was converted into a royal palace, inaccessible to the local people the abbey once served, and the rest of the structure was picked at for building material until it lay in ruins, as it does today.

Like this column in the abbey, the pillar of the Catholic faith, which was hacked down during the Reformation, is in effect no more than a ruin, a monument to past times, as far as much of the Church of England, which simultaneously claims to be built on that column, is concerned. But the pillar of the Catholic faith will support nothing other than the growth of that faith and practice. Last night I watched an old video clip from the time of the last Synod, where Jeremy Paxman interviewed both the Archdeacon of Lewisham, and the Bishop of Fulham about the code of conduct and the debate surrounding it. The Archdeacon quoted Archbishop William Temple as saying that the Church of England had a unique mission in national life in that it was an organisation that existed primarily to serve those who weren’t its members, i.e. the general public. Therefore, argued the Archdeacon, it is only right that the Church of England reflects that public in order to better serve it, and that it must recognise the “gifts of spiritual leadership” endowed to both men and women in the Church by consecrating both as bishops. Paxman then asked the Bishop of Fulham what he thought of this, and he replied simply that the Church of England should stand to serve Jesus Christ, and that is the primary orientation and focus of our corporate life.

S. Augustine came to England in order to convert it. He knew, as a Catholic, that the Church does not compromise its mission by emulating the norms of the culture it wishes to proselytise. If we in the Church of England try to minister to an atheist, post-modern and individualist society by first conforming ourselves to that mindset, then what do we have to offer the country that is different? What alternative vision do we have to proclaim?

For a long time now, we have not enjoyed Communion with the rest of Catholic Christendom, but, like the foundations of that column, our roots run deep. In cherishing those roots, we are able to grow, and that is why there is always hope. As I mentioned after my pilgrimage to Canterbury, not far from that column, an altar of the abbey has been restored for the celebration of the Eucharist. We have Christ with us in the Sacrament and in the Gospel, and so we shouldn’t be afraid to roll up our sleeves and start building for the Kingdom, speaking the truth without fear of derision, pointing out error in a spirit of love and humility. One powerful thing that the Christian tradition acknowledges is that God communicates with us through signs, the meanings of which unfold in our hearts through prayer and contemplation. One such sign from which we can take comfort and strength is what is signified by our liturgy. Whenever a priest says the Roman Canon of the Mass in an English Church, he is harking back to the first Mass said by S. Augustine after landing in England, as the words of that Great Prayer have scarcely changed since that time. He is also making a vivid expression of our dependence on, and thankfulness for that mission sent by Pope Gregory, who plucked the prior of S. Anthony’s from his abbey in Rome and sent him forward, confident that from this man, great things would come: the conversion and unification of Britain in the Christian faith. So remembering Augustine today, we should do so prayerful that that unity that was broken may be restored, so that we can move as one body, unified in one mission, to take the Gospel to the ends of the earth.
Posted by ex_fide at 11:31