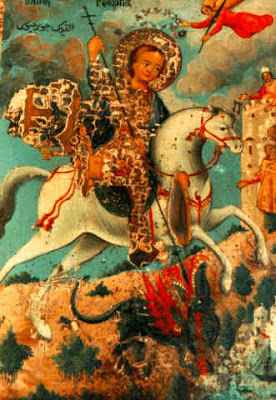 S. George Icon of Ein Bourdiye
القديس جورجيوس صلي لأجلنا
S. George's Day, the most maligned and neglected national observance in England, regrettably associated with White Nationalists and football louts and spurned by the rest of England for its being a religious observance with no bank holidays, presents or chocolate eggs attached. But there are plenty of places in the world where S. George is given his due. In Egypt, hundreds of churches are dedicated to the Martyr, and most of them have feretories for relics of the saint. Across the Levant he is popular among Orthodox and Catholic Christians, and many monasteries and shrines are dedicated to him. Here are some pictures from my afternoon pilgrimage to the monastery church of S. George in the village of al-Khadr on the West Bank. 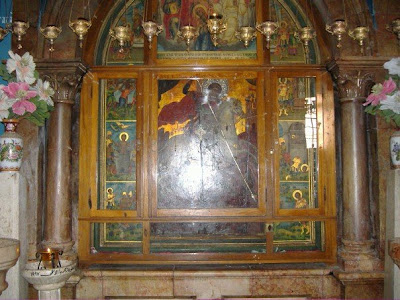 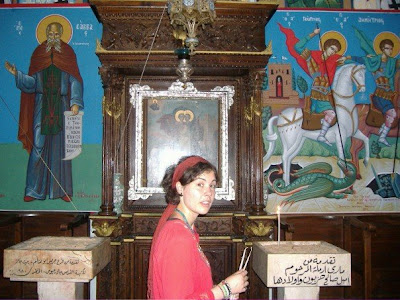 My friend looking startled as I snap her in front of an icon. The murals cover the inside of the church and seem to have been recently restored (2007). 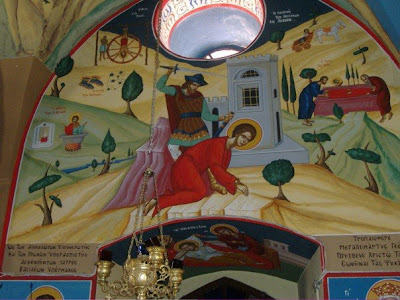 The martyrdom scene depicted over the West Door of the church. The picture shows S. George surviving a number of cruel tortures, including being boiled in oil, before he is eventually decapitated.

I'm ill in bed unfortunately, otherwise I would have gone to work and then Mass in the evening as an observance of the day. I've always felt a keen affinity with George and regard him as a personal patron. This got me wondering actually about the rules for Communion of the Sick. Does a person have to be literally dying before they can request that a priest bring them Holy Communion? Surely if someone is prevented from going to Mass on a certain day when they otherwise would, then they are allowed to ask to receive Holy Communion at home. I'll probably be able to get up tomorrow after bed rest today, and I can keep the feast by going to the Confraternity of S. George Solemn Mass at Holy Trinity, Hoxton which is surely a highlight of the Catholic year in London. In case no one has heard of it, it's an annual thing which tends to happen on the friday of the week of S. George's day. This year it's Friday 24th April, Holy Trinity Church, Shepherdess Walk, Hoxton at 8pm, followed by AGM and reception. Holy Trinity is lovely church, but I don't get to go often. Last year I remember the service being meticulously observed Old Rite, and singing Jerusalem and God Save the Queen at the top of my voice. Can't wait.