Palm Sunday and a thought 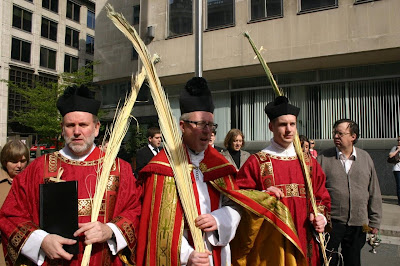 I suppose many of us are already in the swing of the Triduum (the tri- is a bit misleading when you plan weeks in advance), but here are some pictures from the Palm Sunday procession. We began the service at the monument where the palms and palm crosses were blessed, lustrated and censed and then distributed to a number of people. The procession then wove down to Lower Thames Street singing All Glory, Laud and Honour and into the church, where the choir struck up the anthem. After a quick costume change out of red and into purple, we began the Mass with the introit.

All this got me thinking, according to the Extraordinary Form rubrics, the communion service during penitential times is always celebrated in purple. So in the 1962 missal, after the blessing of palms and procession in red, the Mass is purple. Likewise on Good Friday according to the revised rite, the rites of Good Friday are performed in black and then purple is worn for the communion of the pre-sanctified. On Holy Saturday, the vigil is in purple before the Mass is celebrated in white.

But what about this colour purple anyway? Why do we use it right up until the end of Lent? Well, a reminder about the ceremonies of the Jewish Seder meal today got me thinking about this. Each of the Ritual foods on the Seder plate has a specific symbolism. The three different types of vegetation, the Maror, Khazeret and the Karpas are all bitter herbs, and remind the Jews of the bitterness of bondage. At one point in the ritual meal, the Karpas is dipped into salt water or vinegar to evoke the tears the Jews shed in captivity. But dipping is an act that symbolises luxury and freedom, and this is performed while the Four Cups of sweet wine are drunk in a reclining position, the posture of free men. Similarly, the Matzah (unleavened bread) which is called Poor Man's Bread and symbolises the poverty of the Jews as well as the unleavend bread eaten on the night of the first Passover. At one point, the Matzah is used to make a sandwich filled with the Kharoset, which is a mixture of fruit and nuts sweetened with wine and honey. The Kharoset symbolises both the mortar made by the Jews to build Egyptian monuments for their masters, as well as the sweetness of freedom. In making the sandwich, these two symbols of poverty, bondage and freedom are literally pressed together. The Seder is replete with symbolism that flips between salvery and freedom, poverty and luxury, the past and the present.

This got me thinking about how we use the colour purple, or violet, in our tradition. As well as being penitential, is not purple also the colour of royalty in the Bible? In penitential seasons could we not be combining a symbol of penance with an anticipation of the royal Kingdom of God? This could be why in the modern rite, we use purple for the Requiem of an adult. It is a sign both of penitence, which fills the rites of the sick and dying, and of the royal glory of the Kingdom to which we aspire. In the votive Mass pro pace, doesn't purple combine an acknowledgement of the sin of violent discord with a prayer that Divine order will rule?

I would love to know people's thoughts on this because I know that there are minds greater than mine in the Anglo-Catholic blogosphere. Perhaps someone could think of an example to either support or refute the idea that purple has regal smbolism in the liturgy. 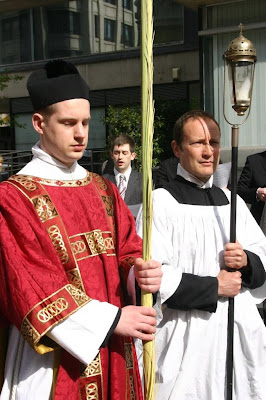