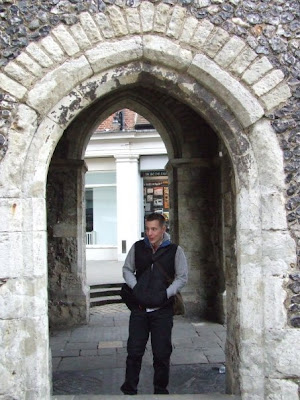 It seems every business in Canterbury is cashing in on the history of Ye Olde medieval city, pilgrimage hot spot, stomping-ground of the Primate of All England and home to the Mother Church of the Anglican Communion. Anyone who's actually read Chaucer's verse will remember that the pilgrims only get as far as a mile away from the city, but we all know that back in the day, Canterbury was one of the most important pilgrimage sites in Western Europe, if not the world. So when my atheist, femenist Canadian friend offered to take me to Canterbury on a weekend trip for my birthday, I was elated. Who better to go with, I thought, than a comely wench from the New World who could regale me with stories of the profane on our search for the sacred.
Having read in old Pilgrim Manuals of England about the destruction of Canterbury's shrines and Churches , I was keen to see for myself how much of this heritage still existed, and whether Canterbury was still a city that enjoyed vibrant witness to the Catholic faith, the true religion of England. The city has been associated with numerous saintly figures, foremost among them S. Thomas of Canterbury, who was martyred in the Cathedral and whose shrine was the main pull before the reformation. But there is also S. Mellitus, first bishop of London and of course S. Augustine of Canterbury. What remains of their city? Can we, the Church of England, still walk with them? 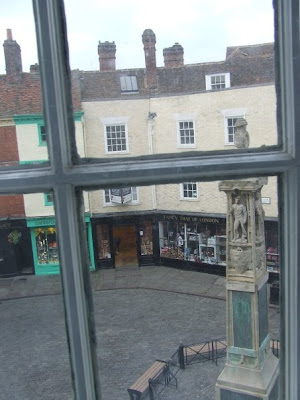 This is the view from our hotel room. We stayed at the lovely Cathedral Gate Hotel with views of the old city and the cathedral next to it. The good weather meant pubs had tables spilling out onto the street, and the city centre was busy well into the night. 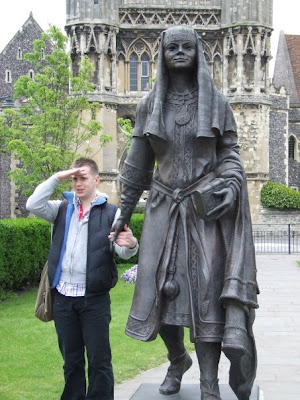 The first thing that caught our attention was this statue of Queen Bertha, the Christian wife of the pagan King Aethelbehrt. This statue tells of the moment when her husband rushed to find her coming from church, to tell her the news of S. Augustine's landing. Although the statue makes her look a but minging, her prayerbook is well executed, and it was a delight to find such a vivid depiction of this seminal event in the history of Christian England. The statue is outside the gate of St. Augustine's college, which is built on the site of the famous Abbey. 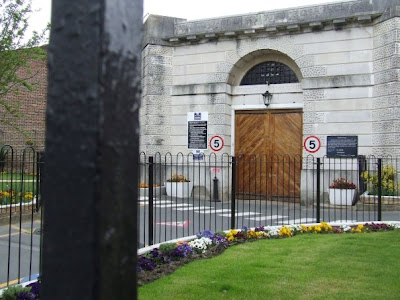 After its dissolution, much of the abbey structure was broken up and the stones recycled. Canterbury Gaol is built partly from stones from the site. 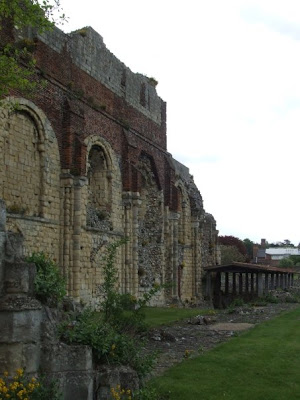 The site of the former abbey is now run by English Heritage, and after paying an entrance fee, a free audio-tour is available which gives some idea of what life was like in this great complex of buildings. I couldn't help feeling both impressed and also saddened by what had been lost. Whatever abuses the medieval Church might have been accused of, I do not believe that this holy place of prayer was so awful as to deserve destruction. There is plenty of evidence that this monastery had a vital role to play in the local community of Canterbury. Ordinary lay folk prayed here, received the Sacraments here, sought advice here and when they died they were buried in the lay cemetery. On the many altars of the abbey, the Holy Sacrifice of the Mass was offered to the Glory of God, and this no doubt sustained countless individuals throughout the ages. 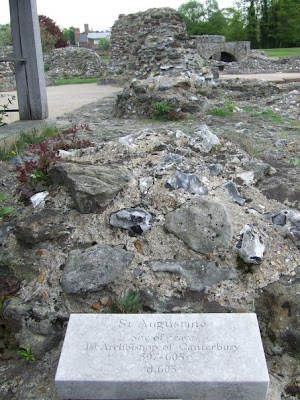 This was once considered one of the holiest places in England, visited by pilgrims from all over Europe and lovingly covered in gold and gems. Now the site of S. Augustine's tomb is marked by a small slab of stone, barely visible among the grass that grows around it. I knelt here and said a decade of the Rosary, and tried hard to connect the place now with what it must have been like then, when the saint's body was here. It is difficult to think of what has been lost, but even if all that remains is the rubble filling of a stone pillar, that is often enough to evoke a memory that gives us strength. Just the sight of that pile of rocks in a grassy field can bring us to our senses and inspire us to hope that we in the here and now can stand by our faith and, through lovingly preserving its art, symbols, texts and buildings, pass it on to the next generation as our most precious gift. 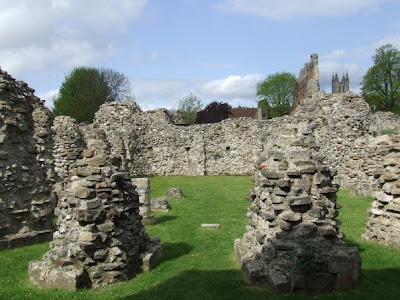 These pillars once supported the roof of the crypt under the church of St. Mary. Much of this part of the abbey has survived. 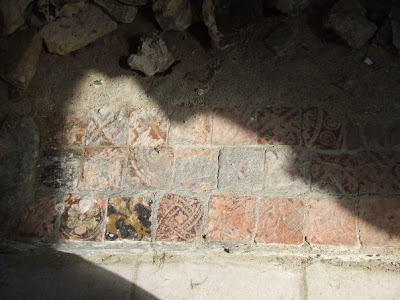 Tiles in the chapel of S. Mary and the Angels. 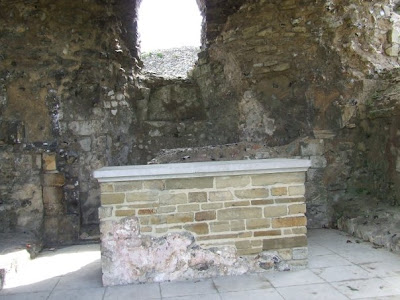 For me, the highlight of the trip was coming across this renovated altar in the crypt chapel of S. Mary and the Angels. The idea that in this holy place, the Holy Eucharist can be celebrated by modern pilgrims on the site of countless Masses is so very encouraging. I hope to make enquiries about the use of this site by pilgrims and perhaps one day Canterbury will be as popular a destination as Walsingham for English pilgrims. 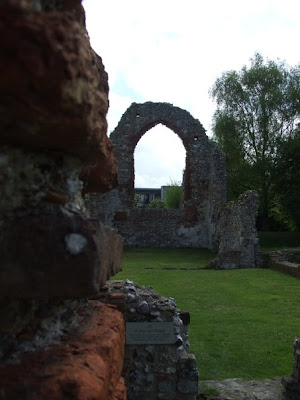 The ruined East End of the church of S. Pancras, which was used by the monks as their cemetry chapel. 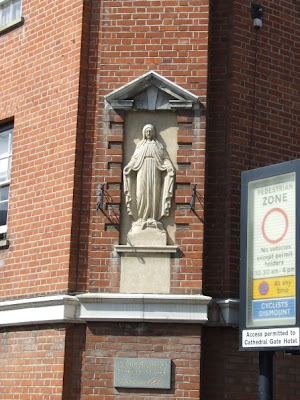 Back in town, it was a delight to see this image of the Mother of God in a prominent public position. It is the mark of a true pilgrimage town to see these shrines to Our Lady dotted around the place, inspiring people to piety as they go about their daily business. The sign below points to the local Roman Catholic church. 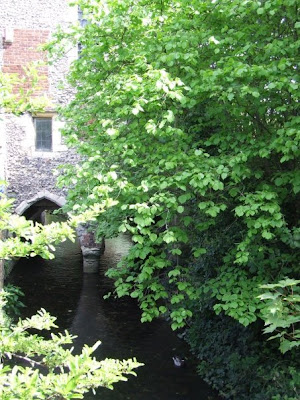 Greyfriars house, so named because it was once the site of the first Franciscan settlement in England. This was once the sleeping quarters of the friary, and stands over the river Stour. In more recent times, the sight has been reclaimed by the Society of Saint Francis, who have a chapel upstairs where a Mass is said every wednesday at 12.30. There are also Roman Catholic Franciscans in Canterbury who occasionally use the chapel. To me, this was also a living sign of the continuity of faith in this city. 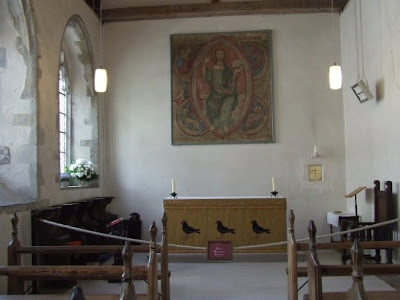 This simple chapel is found in the Eastbridge hospital, a medieval building on the high street which once provided lodgings for poorer pilgrims who had come withouth arranging a place to sleep. The building is well worth a look in. The Chapel was particularly airy and peaceful, and allowed a nice break from the busy streets below. I could just imagine bands of pilgrims scrambling up the stairs at dawn to hear Mass here. 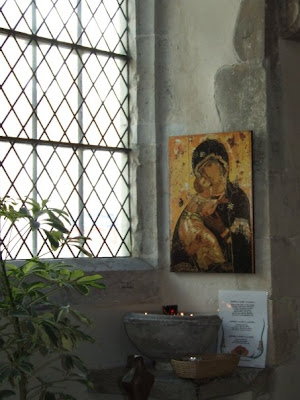 An ikon hangs in the chapel and visitors can light candles and enter names into a book to be prayed for during Masses said here. 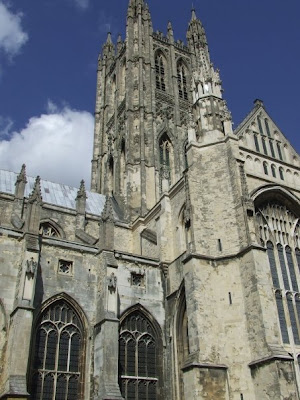 The famous Cathedral needs to introduction. I took my atheist friend along to Evensong, and she had plenty of questions about why we said certain prayers and what it all meant. The choir was away so a singing group stepped in. Eh, it was the only way to get into the cathedral without paying so we were happy. 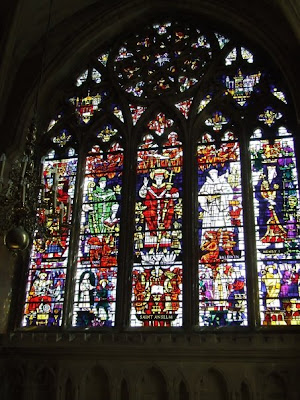 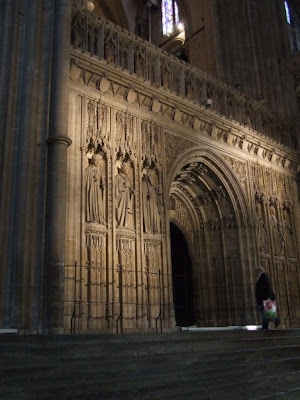 The ornate choir screen of the Cathedral really is worth seeing. I imagine that the common man sitting outside this screen would have had no view of the liturgical action whatsoever, although he must have been able to hear the services being sung quite well. During my visit, a nave altar and some Indaba-style starwars chairs had been set up in the nave. A cuddly liturgical setting I'm sure, but I wouldn't want to get a splinter of those chairs. Ouch! 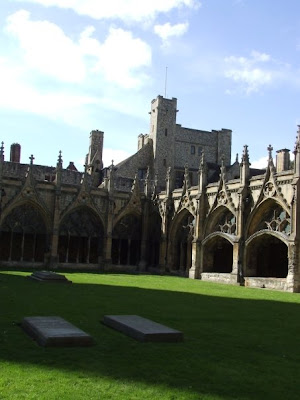 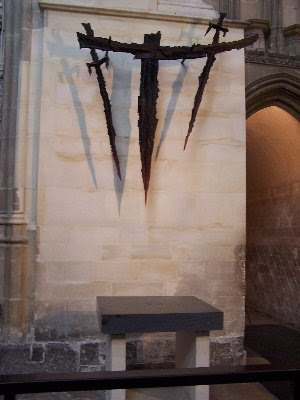 The nearest thing to a shrine to S. Thomas is the site of his martyrdom, marked by an altar and this weird sword-cross arrangement. I was quite gratified to see a number of people head straight down here to pray, and it was comforting to know that S. Thomas still has modern pilgrims who bear him in mind as they wander around the Cathedral which once held his shrine. 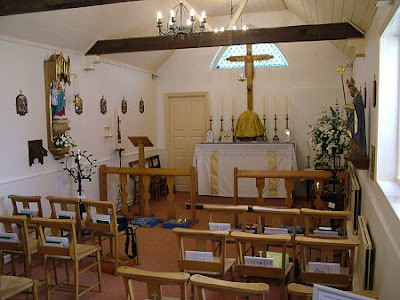 On the return from the Cathedral I had to stop dead in my tracks as I was convinced I could smell Rosa Mystica emanating from a shop-front. It transpired that a Mass was taking place in the Parish church of S. Augstine, which belongs to the Anglican Catholic Church and is built in an old shop. The front part of the shop is open to the street and offers passersby a chance to pick up some literature about this continuing movement. I have to say that I felt inspired by the sight of a faithful few gathered in this tiny church, having left behind all the comforts of the established church as a matter of principle. Their witness to the Catholic faith, right in the shadow of the Cathedral struck me as particularly powerful. They may be small, they may worship in a shop-church, but they have certainly practised what they preach and I admire them for that. I wondered about the "Western" arrangement of the church and what their liturgy might be like. I hear they use their own missal which includes most if not all of the Book of Common Prayer as well as the English Hymnal. I believe they do not accept Papal claims and are not urgently seeking reunion with Rome. 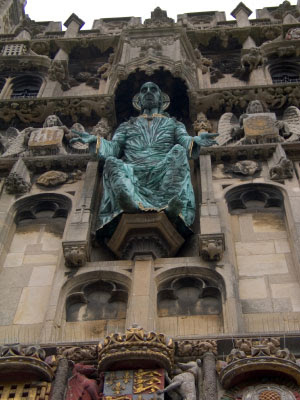 So did I find enough in Canterbury to sate my interest? Definately. Apart from the charm of beauty of the city and that part of Kent generally, Canterbury still keeps the memory alive of its old pilgrimage past, and it is perfectly possible for a modern pilgrim to come here today and tap into that same feeling of the sacred. I think as part of a dedicated pilgrim programme, I'd be willing to re-visit and re-re-visit Canterbury in the future and there is enough of interest to comfortably fit into a weekend with time left over to explore the pubs and restaurants of the city.

One thing I would say, however, is that I found it difficult to find a church of my integrity in the city. I am aware of one FinF church outside the city, but it was too far for me to travel on the Sunday. Instead I took a chance on S. Peter's church in the city centre, which offered very beautiful Catholic worship in the CW format. Still, almost no one understood what Forward in Faith meant and I think churchmanship is generally on the lower side of High. This shouldn't be a problem for pilgrims however, and I strongly advise people to see for themselves what Canterbury has to offer.
Posted by ex_fide at 19:58