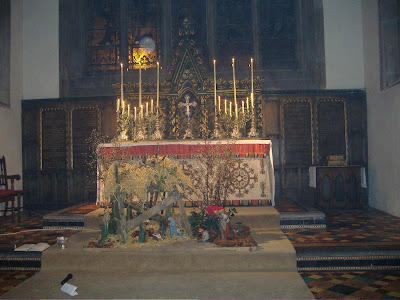 Merry Christmas to one and all, hope everyone is enjoying the Feast of the Nativity. I am currently unable to move very far or very quickly, or even maintain a face-to-face conversation without falling asleep, and this due to the excessive amount of free-range turkey and Pastis I have consumed today. So I find myself at the computer desk, eager to add some pictures of the church I visited last night for Midnight Mass. At least this only involves moving part of my upper body...

My parents have recently moved to rural Oxfordshire, and I spent some time worrying about where I would go for Midnight Mass that would be within easy driving distance of my parent's isolated cottage. I got onto the FinF website and eventually found the Parish church of Ss Peter and Paul listed in nearby (15 miles) Wantage. I rang the rector and learned that although the church isn't actually FinF, the current vicar, Fr. Salter, is supportive. In this part of Oxfordshire, you throw a penny and hit a woman-priest, the area is so saturated with female clergy, and this made me all the more pleased to find an Anglican church that I could go to. 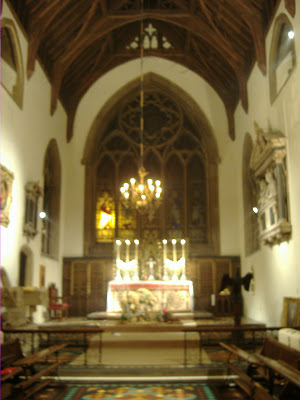 Chancel, with some beautiful monuments

The church bells were peeling just before midnight in the busy town-centre of Wantage, the pubs were absolutely brimming and it was nice to find the town's church quite busy too. I slipped into some latecomers' seats behind a pillar while the choir was singing Mattins of the day in a darkened church. At Midnight, the Mass itself started and a huge altar party wound its way around the church, depositing en route the considerably-sized choir in the stalls at the back of the nave. The liturgy was modern Roman, High Mass said from a modern portable nave altar, with a carol in place of the Psalm and a protracted exchange of the peace before the canon (it's my custom at such moments to be overcome with piety and drop to my knees in fervent prayer, thus avoiding having to shake hands with every Tom, Dick and Eileen), which is all very standard I suppose. The music was Schubert's Mass in G, which I was very excited about. Unfortunately, one of the violins had tuning issues, but the choir (all presumably unpaid non-professionals) did really well and the music truly contributed to the dignity of the occasion. One thing really annoyed me, however: the thurifer, who had customised the standard attire of cassock and surplice by wearing a bright pink feathery hair-band on her pony-tail, decided to remove her 6-inch heels during the readings and never put them back on, padding around the church in tights instead. Any self-respecting server knows that apart from health and safety concerns around the charcoal, it is bad form to serve at the altar both in heels and barefoot. I know it's wrong to notice all of this but I couldn't help it, plank in my own eye etc but honestly, a man has limits.
The Mass ended with a procession to the crib, where the Celebrant carried the Bambinello in a cope and humeral veil to the crib, where the scene was lustrated and censed and the blessing given.
I didn't take pictures of the liturgy, but I managed to take a few snaps of the church afterwards. I have to apologise for the poor quality, but flash didn't look good and, well, I don't have a decent camera. The chancel is beautifully adorned, and the low, stone arches of the nave give a sort of basilica effect to the building. However, the narrow lines of this old church are quite at odds with modern tastes in liturgical celebration, and so Mass from the High Altar would be quite unacceptable to a modern congregation. Unfortunately, this means that with the addition of a nave altar and the focus of liturgical activity being so close to the congregation, the impression is one of a slightly squashed arrangement with only half the space in use. This is quite normal however in similar churches, and indeed any church where a nave altar has been preferred, and is truly endemic in our cathedrals. 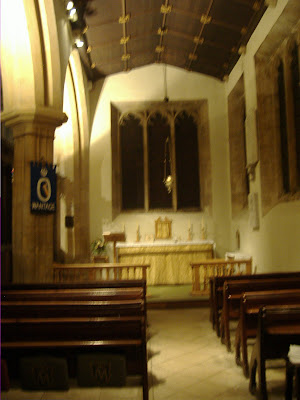 I would like to thank Fr. Salter for his help and for letting me take some photos of the church. Please do visit if you ever find yourself in this part of Oxfordshire; one thing I've realised this week is the unfortunate state of the Church in some parts of rural England, with some impressive pockets of enthusiasm like Ss Peter and Paul. It's very important to pray for Anglicans in rural parishes who don't enjoy easy access to the various networks or abundance of churches to chose from, such as we enjoy in cities.
Posted by ex_fide at 20:50