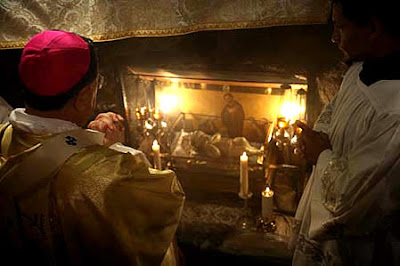 Ah, to be in Bethlehem for Christmas. On Christmas Eve, His Beatitude Fouad Twal, the Latin Patriarch of Jerusalem travelled to Manger Square to say Midnight Mass at S. Catherine's church, and he was welcomed into the city by legions of local scouts playing bagpipes. In deference to a long-standing tradition established by Yasser Arafat, the President of the Palestinian Authority, Mahmoud Abbas, also attended, along with the Christian mayors of Bethlehem and Beit Jala, home to the Latin Patriarchal Seminary. 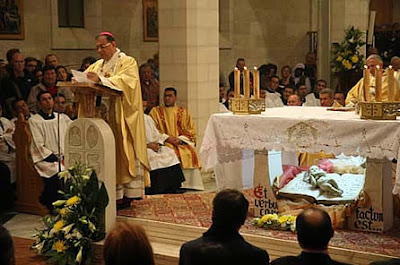 One thing to note is the presence of a biretta in a photo available here http://www.maanimages.com/index.php?opr=Details&ID=58927. In my experience of Latin Catholicism in Egypt and Palestine, ecclesiastical dress in the Middle East tends to conform to the "polyester practical" school of thought. However, the Patriarch of Jerusalem seems to be quite enthusiastic for the restoration of various symbols of office. 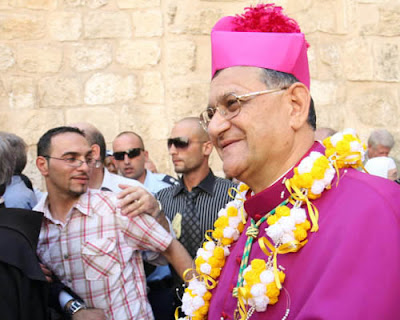 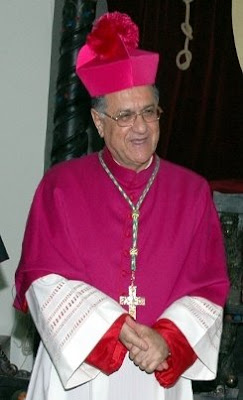 Pilgrim numbers have been up in Bethlehem this year, which is something to be thankful for. The security wall has been slowly strangling the town over the last few years, exacerbated by the ring of expanding settlements that will soon encircle Bethlehem completely. There have been some ugly settler incidents in the municipality this year, most notably around the village of al-Khadr, where the shrine of St. George lies, and in the villages of al-Ta'amrah where settlers from Tekua frequently attack Palestinian farmers, and temporary road-blocks around the settlements disrupts the local agricultural economy. At least foreign tourists and pilgrims won't have to look far for the ugly 8-metre concrete slabs of the separation wall. The area around the main checkpoint where tourists from Jerusalem arrive may have the look of a normal border crossing, but for the time being foreigners still have to queue with locals and can easily observe the oppressive system of permits and finger-printing in action for themselves. I really hope to go back to the West Bank this year, possibly to visit the Parish we have just twinned with, and I will definitely try to get to Bethlehem if I can. If anyone is going on pilgrimage, please let me see the photos!

Photos of the liturgy courtesy of the Latin Patriarchate of Jerusalem.