Advent IV and the Krib is up! 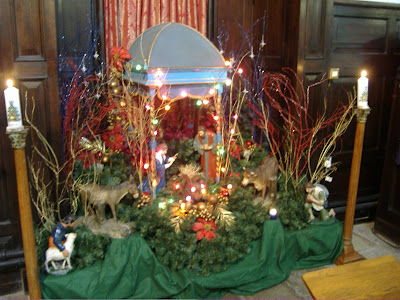 Advent IV went very well today with a High Mass at S. Magnus, and the church was packed to the gunnels on what is supposed to be a busy shopping weekend. People were sharing their plans for going away for the coming feast, or if they're staying in London, making arrangements to get home after Midnight Mass on Christmas Eve. A table in the crypt was heaving with Christmas cards left in piles arranged by name, and I got a real sense of being part of a very close and stable congregation, even though half the people at Mass were visitors. I had some friends come to Mass as well, which is quite unusual, as I rarely succeed in convincing non-Christian friends that S. Magnus is worth getting out of bed for. It really was a joyous occasion to lift the spirits on an otherwise dark and dreary day. 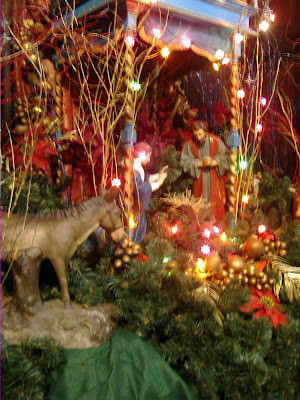 A donkey looks on, choking on an artificial pine-needle. When there was no room at the inn, someone suggested the bandstand at the end of the road.

The Christmas Crib has been put out in the Church, taking the place of the rather under-loved Pieta shrine (more about that at a later date). The Crib occupies an old doorway which has been filled in, and which is treated as a sort of rotating shrine area; normally it houses the Pieta, in Eastertide it is where we put the Easter Garden etc. 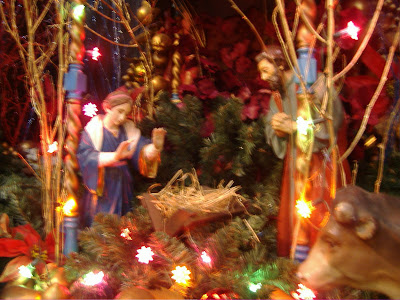 Coloured lights in the Kylie Kristmas Krib
I think the crib deserves to be called "glorious"; how many other churches have such a posh stable? I think it's the top part of a palanquin that fits over a processional (fibreglass) statue of Our Lady of Walsingham which is knocking around downstairs. The Bambinello Himself is currently secreted away in the sacristy, and the Magi are waiting for their star near the Christ the King altar. Expect more pictures soon.
Posted by ex_fide at 21:38