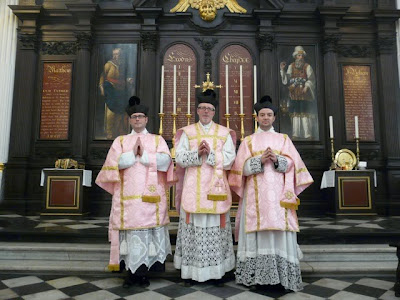 A snap from yesterday's Mass of Advent III known as Gaudete Sunday. Rose-coloured vestments were worn, with the Deacon and Subdeacon wearing Dalmatic and Tunicle to lighten to the mood of Advent.

This set of Vestments (a complete High Mass set with humeral veil, cope and additional choir stoles) was a donation. As you can see, the Dalmatic and Tunicle are distinguished from each other as they ought be: the tunicle being slightly longer and bearing only one horizontal band. They both have the flap-sleeves common in French and Belgian vestments. The chasuble features an Agnus Dei embroidered motif and a large cross orphrey. The humeral veil is embroidered with IHS.

The Mass was served by the Rector, Fr Warner, with Fr Craig Barber as Deacon. Mr Jason Groves served as Subdeacon, celebrating his 20th Anniversary serving in that role. Twenty years ago he first served as Subdeacon Crucifer for Solemn Evensong of Advent III in Australia.

After the Liturgy, the people of S. Magnus retired as usual to the crypt, where refreshments were offered, including pink beetroot waffles, a beetroot and mackerel pate and "pink" cocktails (pink gin and cosmopolitans). Every single member of the congregation wore an item of pink (or rose-coloured) clothing to celebrate Gaudete Sunday, including the Premier Sacristan, Ex Fide, who was stunning in a pale pink Oxford shirt, it must be said.

It's very encouraging to see S. Magnus continuing in its strong and steady growth. It's a joy to receive visitors to the church from all over the world (owing to our location next to the Monument) and it's very satisfying to see so many people return Sunday by Sunday. I believe 2010 has broken the record for Weddings solemnized at S. Magnus, and next year's calender is looking full already (so book now!), with more weddings and baptisms scheduled. Perhaps the reason S. Magnus folk have gone all out to celebrate Gaudete Sunday is because there really is something to celebrate. Gaudeamus, because we are part of a community of witness that has flourished in an unlikely place, and which seems to defy all the doom and gloom stories of plummeting attendance and the death of the orthodox, catholic faith in the Church of England.
Posted by ex_fide at 12:55