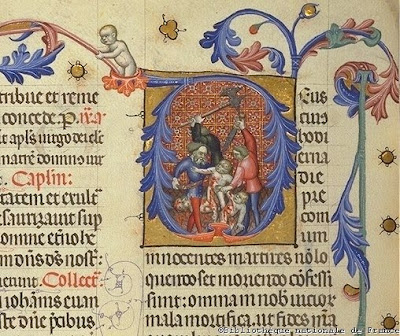 Today's feast of the Holy Innocents is known in English as Childermas. This feast is a real liturgical curiosity. Certainly very ancient (going back in the West to at least 485), this feast is pegged in different traditions to either the "Sanctoral" or the "Seasonal" cycle of the year. While the Latin church keeps this feast on the 28th December, the Greeks on the 29th and the Syrians and Assyrians on the 27th, the Armenians on the Monday after the second Sunday of Pentecost, as they maintain that the Holy Innocents were killed fifteen weeks after the Nativity.

Another curiosity is the liturgical colour used for the feast. If the feast falls on a weekday, Violet is used. This stems from the Roman argument that since the Innocents were killed before they were able to attain the beatific vision, they should not be commemorated as other Martyrs, but in honour of the women of Bethlehem, the Gloria and Alleluia are not sung at the Mass. In the Gallican rites of France and parts of Germany, this distinction was not made and Red was used along with the Gloria and Alleluia. Therefore, in the Old Roman Rite, Violet is used if the feast falls on a weekday and Red is used if it falls on a Sunday (and on the Octave day, when the Gloria and Alleluia are also sung), a rare example of compromise between Roman and local uses.

In England, there was a custom of not working on whatever day of the week the feast fell on for the rest of the year until the next Childermas. It would be logical to assume that this custom was only followed by the very wealthy.
Posted by ex_fide at 16:45