The S. Joseph altar is up! 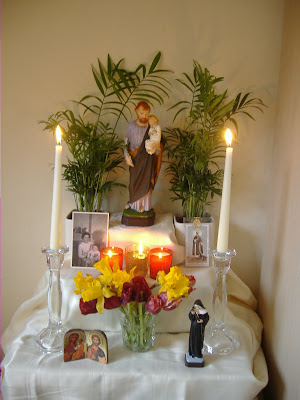 I'm lucky enough to have not only a fairly decent name day (S. Joseph. March 19th) with plenty of customs and traditions attached to it, I actually get the entire month of March to celebrate my patron saint. However, since I couldn't wait for March to actually begin, I have already assembled my S. Joseph's altar, to begin my devotion a little earlier this year.
Strong devotion to S. Joseph is found in various localities in southern Europe, and is the origin, for example, of the famous Falles festival in Valencia. However, in Sicily this devotion is centred on the S. Joseph altar, and the communal meal which takes places around it. Traditionally, a votive shrine, or "altar" would be constructed in homes or churches some time before march 19th, and blessed by the local priest. This altar is redolent with symbolism. For example, the altar is generally three-tiered to represent the Blessed Trinity, and is topped by a statue or image of S. Joseph or the Holy Family. The image is flanked by palms to represent those palms thrown before Christ on the first Palm Sunday. Images of other saints or deceased relatives are commonly placed on the altar to represent our belief in our communion with the saints and those who have died in the faith. Special breads are baked in special shapes : a monstrance is popular, or indeed any item associated with S. Joseph, such as a saw or a carpenter's square. A plate of fish represents the Apostles (fishing for men), and limes or lemons represent God's bounty on earth. Another plate will contain bread-crumbs, served as a topping for pasta instead of cheese and an allusion to saw-dust, and another will hold fava beans. The story goes that in the Middle Ages, the Sicilians suffered a severe famine, and prayed to their patron to save them from starvation, promising a great feast if he could intercede for them. It then occured to someone to try to survive on fava beans, which had previously only been used to provide animal feed. By switching to this plentiful and cheap crop, the Sicilians survived the famine and had their feast. To this day fava beans feature on the S. Joseph's altar in memory of this miracle.
So far my altar only features on or two of these items, but I've set it up in my bedroom in time to begin the Novena prayers before the feast (well in time...), and it will eventually be taken downstairs to grace my dining table on the 19th for a celebration of my name day.
Since March is the month of S. Joseph, why not make your own home altar? Alternatively you, there is an online virtual S. Joseph altar with information, prayers and recipes , and you can even virtually donate foodstuffs to the altar!
Posted by ex_fide at 15:36