The story we tell... 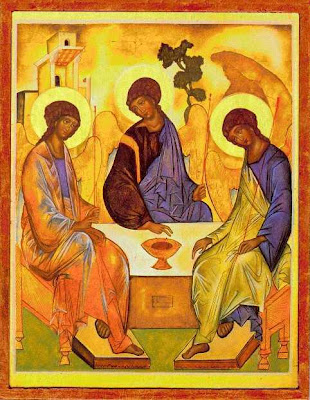 …is that on the Sunday of his elevation to the See of Canterbury, on the Sunday after Pentecost of 1162, S. Thomas Beckett determined that this Sunday should from henceforth be dedicated to the doctrine of the Holy Trinity. Offices and Masses of the Holy Trinity had already existed for centuries, but Pope Alexander II had refused to institute a feast of the Holy Trinity on the grounds that every single day was dedicated to the Trinity, whenever the doxology Gloria patri… was pronounced. Many years after S. Thomas, Pope John XXII finally confirmed the dedication of this Sunday as a distinct feast, as its celebration had spread from Canterbury to the rest of Western Christendom. In a sense, Trinity Sunday was the gift of Canterbury to the rest of Europe, a day set aside to consider that God, in His infinite charity and wisdom, has chosen to reveal Himself to us in three Persons.

On Trinity Sunday yesterday, results of the European Parliamentary elections were broadcast, and it emerged that our gift to Europe this time round, is to elect two MEPs from the far-right, racist British National Party. In the midst of a general movement to punish the Labour party, a significant portion of the rejectionist vote went to a party that is not only opposed to the European project, but is virulently against the values of openness, inclusivity and social equality that we Britons idly like to claim as our own. At the risk of sounding as if I’m politicking excessively, I have to make the point that the BNP offers no coherent, realistic way forward for Britain’s economic problems, or the reform of parliamentary democracy. The party manifesto is rather more focused on issues of race and ethnicity, claiming that native Britons are discriminated against in favour of immigrants, and advocate voluntary repatriation of non-Caucasians; as far as we Christians are concerned, destroying families, coherent communities and kicking the sojourner out of our midst!

But it would be pointless to dwell in despondency, or to make mildly shocking pronouncements against universal franchise. We shouldn’t be surprised that the regions of the UK that voted for the BNP are facing increasingly isolation from the economic and political life of this country. Anyone living in the North of England, especially outside of the major cities, must feel as if they are frequently overlooked by investors, and that they have dropped off the map as far as government initiatives in education and culture are concerned. The long demise of the North is nothing new, and the transformation of former industrial centres into university towns has not brought significant benefits to the local population. In fact, under the new regime of granting almost anyone the right to award a degree and filling new, inferior universities with high fee-paying foreign students is surely only going to exacerbate the anxieties of the white working class that the BNP claims to represent.

What are they offering that’s so good? Well, in this climate of mistrust in political life, fear is the greatest currency and the more of it you can provide - the more access you can get to an individual’s deepest anxieties - the better. It would sound extravagant to say that BNP voters were in the grip of the devil, but this is what Satan is; the creeping fear and despair that work against God’s freely given gifts of faith and hope. Fear is what imprisons us; it’s what turns us away from God, and away from our neighbour. Fear is the enemy of truth.

I’m not about to launch a massive Europe-wide evangelisation programme, much as I’d love to! However, I do think a bit of practical, day-to-day evangelism is demanded of us by the Gospel. If we can be a people who stand for the truth, if our word can be trusted and if our worship of the Triune God is seen as worship that dispels fear, then we have taken the first step. Passing this on to others in our household, town, city, nation or continent allows us to take the second. Fides, spes et caritas…Faith, Hope and Charity are the virtues that we proclaim, and blasphemy, despair and hatred are the sins against them. We really need to be tireless in proclaiming these virtues, in living them and in teaching them, and zealous in fighting whatever opposes them. They are only the seed of our future, but without them, everything else is groundless. Let them be the guiding principles of our political system, let them play a part in addressing the problems of those victims of despair, let them be the beginning of boundless grace and our endless freedom in God the Father, the Son and the Holy Spirit.
Posted by ex_fide at 12:34