Pilgrimage to the Holy Places of Assisi 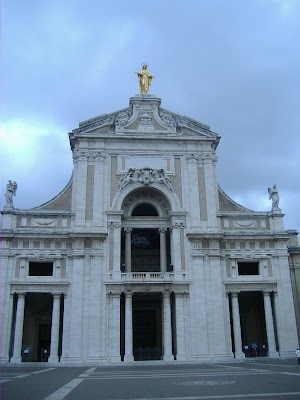 People who check this blog regularly for fancy snaps of liturgical happenings at S. Magnus may have wondered where the hell I've been for the last few weeks. Well, as a matter of fact I've been in Italy, doing the rounds, and decided to hold off posting anything until I got my own laptop, which arrived today. Big thanks to my housemate, who has allowed me to use his laptop periodically to "enrich" my blog, when he'd rather be on Facebook.
So here are some nice pics of Assisi, which was an amazing experience. I only spent a day seeing the sights, but got a few decent photos with my point-and-shoot cheapo camera. The weather
in mid-January in Umbria was basically wet, wet, wet. Still, there is plenty to see in this amazing part of the world. 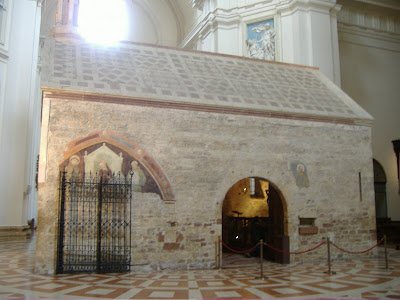 The Basilica of Santa Maria delgi Angeli is built around the first Franciscan church: the Porziuncula, or "little portion". It is here that S. Francis of Assisi first realised his vocation and it is the mother church of all Franciscans. It is said that when the little church was given to S. Francis by the Benedictine Abbot of Monte Subasio, it was in terrble condition and that S. Francis restored it with his own hands. The modern-day basilica also incorporates the chapel of the Transito, the place where Francis died, and the rose-garden of S. Francis where, according to tradition, S. Francis felt a pang of temptation to leave his way of life, and humiliated himself by rolling naked in some brambles. Coming into contact with his body, the brambles turned into rose bushes, and to this day a variety called Rosa canina assisiensis grows in this garden, and the leaves of the bushes are often used by those suffering from painful illness. 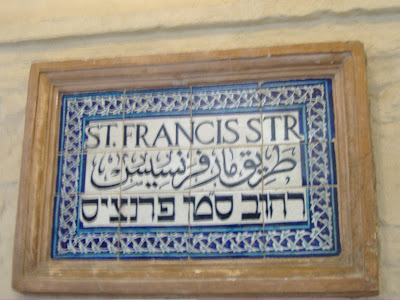 Also on display in the basilica is this interesting sign, which I assume comes from Jerusalem and belongs to a street in the old city which has since been renamed. If anyone knows where Tariq Mar Fransis or Rehov St. Franzis is now, then please let me know! 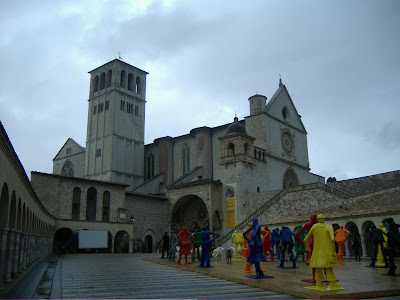 The basilica of S. Francis, which contains the tomb of the saint, and is attached to the Convento, is another important stop for any pilgrim. Here you can see a painfully modern take on the Presepe, or Nativity Scene, which adorns most churches in Italy until Candlemas. This one involved lots of confused-looking fibreglass people heading towards a silver bambino in a chicken-wire manger. It is believed that S. Francis was the originator of the Crib devotion, when he created a live Nativity scene in Assisi composed of real figures and livestock, and where the crib formed the altar for the Christmas Mass. 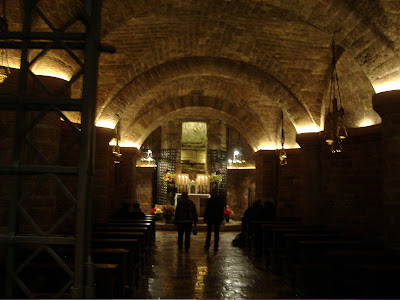 Photography is strictly forbidden in the crypt which contains the relics of the saint, but that didn't stop me taking a sneaky pic. The tomb is contained in a brick column which is accesible from all four sides. The atmosphere in the crypt is quite palpable, which brown-robed figures moving among the pews muttering prayers. I felt moved to stay here for about an hour enjoying the silence of the place, and saying a rosary for all those who had asked my prayers. 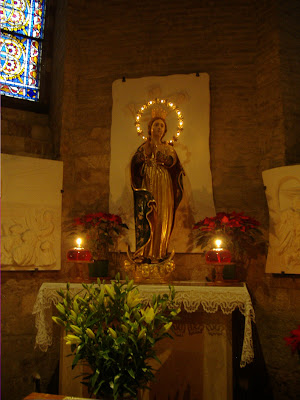 There are numerous interesting shrines and chapels in the basilica, including one dedicated to the Immaculate. 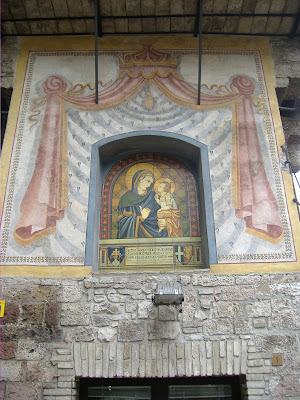 Almost every street corner in Assisi features a small Marian shrine or statue, and I took a photo of this one, which was particularly grand. Devotion to Our Lady and S. Francis seems to pervade the entire town. 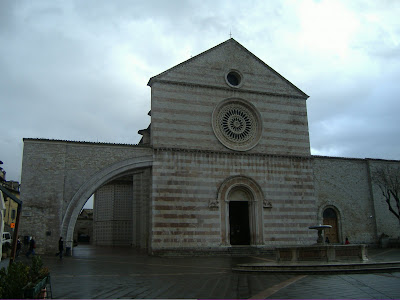 Across town from S. Francis' basicila is that of S. Claire of Assisi, foundress of the second order of Franciscan sisters. This church contains the crucifix of San Damiano, the iconographic crucufixion scene, from which S. Francis heard the very voice of Christ. During my visit, the church was almost empty, while a Mass was being said in the Blessed Sacrament chapel and through the glass doors I could see a single young woman in attendance. I got the impression that this town lives by the maxim of Franciscan spirituality: Jesus in the crib, Jesus on the Cross, Jesus in the Eucharist. 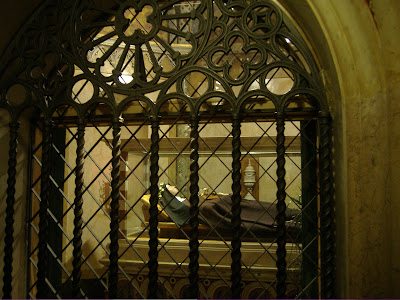 The visit to the tomb of S. Claire is also an amazing experience, as the crypt contains many relics of the saints, including a cloak sewn by Claire for Francis. I often get the feeling that S. Claire was forced by the norms of her time to accept life as a cloistered nun, whereas her vision of following Francis involved more active apostolic work in the community among the poor and the suffering. However, during my stay in Italy I came into contact with numerous expressions of the Franciscan life for women, some of which involved very tough missionary work in Europe and abroad, and I suppose in a sense Claire's vocation is being lived out anew in our own times, while the obedience she manifested is an example to us all. 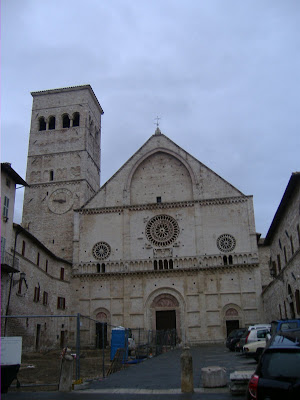 The Cathedral of San Rufino, which is undergoing renovations, was the main church of the town in S. Francis' day. 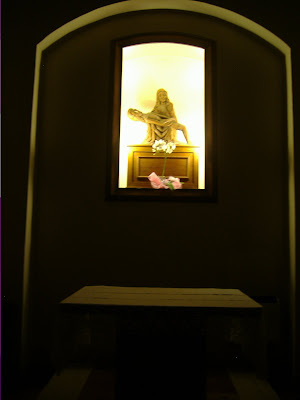 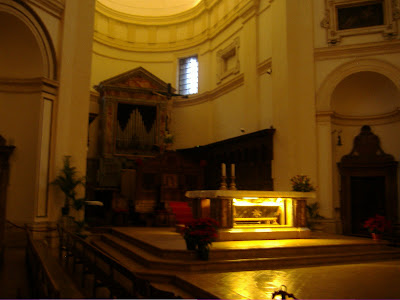 It contains the relics of the saint under the High Altar.... 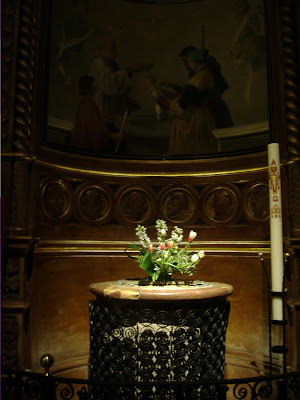