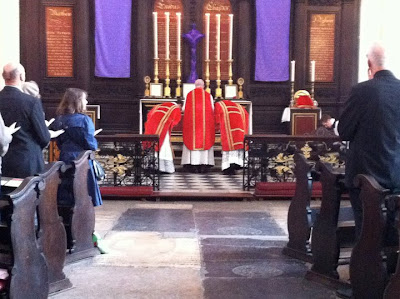 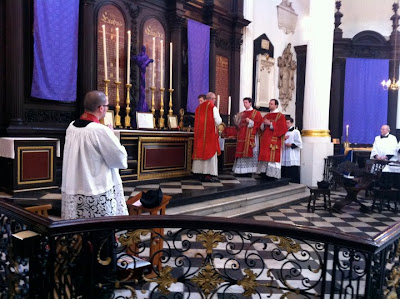 Just sharing some photos (taken on a mobile phone) from this year's S. Magnus day (April 16th). It is very rare that the feast falls in Lent, and I understand that in the Old Calender this would never have happened at all. Therefore, the propers for S. Magnus are based on those for a Martyr in Paschaltide, and in the Trondheim Use (the Archdiocese in which the cult of S. Magnus grew up), the Gospel is introduced by, not only a proper Alleluia, but also the Pascha nostrum immolatus est of Easter Day! This was extended to all Celebrations of S. Magnus day, even if the day strictly fell outside of Eastertide. But, this year we found ourselves celebrating our Patronal Feast in a veiled Church in Passiontide. Above you can see the Deacon and Subdeacon making their Confession, and then censing the Celebrant at the Introit. 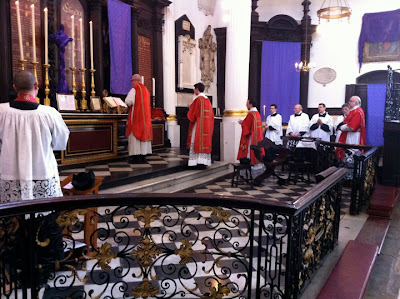 The Celebrant and Ministers read the Introit and Kyrie. As you can see, a tunicled crucifer is in attendance, and adds solemnity to the occasion. The Lenten office was also commemorated: the second Collect etc and the Last Gospel being proper to the Saturday. 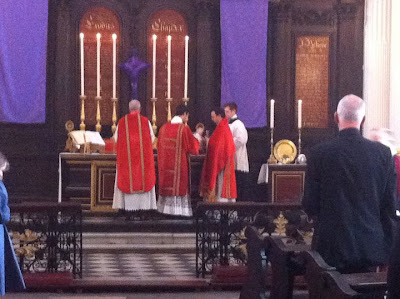 Here the Deacon takes the cruet of wine from the Subdeacon at the Offertory. It might interest you to know that the Vestments worn at Saturday's Celebration once belonged to Nashdom Abbey, and are part of a Pontifical set in the Spanish style. Although not visible here, the maniples are fringed with tassels. I wonder if the tunicle and dalmatic had even bigger ones which were deemed too excessive and removed. 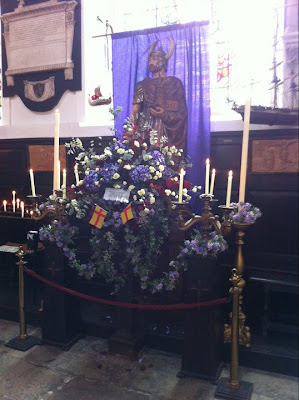 The Shrine of S. Magnus, unveiled for our devotion. The flags in the flower arrangement are the old flag of Orkney. The red cross on a gold ground was supposed to be based on S. Magnus Erlendsson's own standard and bore his name as the unofficial flag of Orkney since the Islands came under Scottish rule. It was also used by the Kalmar Union of Scandinavian kingdoms until 1523. The unofficial flag was superseded in 2007 by a new version, approved by the Court of the Lord Lyon, which was designed by a man with his grandchildren's crayons. It is red with yellow and blue crosses and looks from a distance like the Norwegian flag.
Posted by ex_fide at 15:01