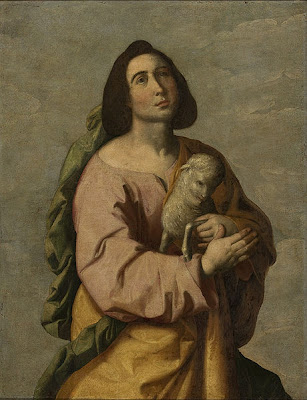 Today is the Feast of S. Agnes of Rome, virgin and martyr. She suffered in the Diocletian persecution and was subjected to a particularly brutal martyrdom in 304 at the age of only twelve or thirteen. The prefect wanted Agnes to marry his son, and when she refused, she wascondemned to death. Since Roman law did not permit the execution of virgins, the prefect had a naked Agnes dragged through the streets to a brothel. As she prayed, her hair grew and covered her body. It was also said that all of the men who attempted to rape her were immediately struck blind. When led out to die she was tied to a stake, but the bundle of wood would not burn, whereupon the officer in charge of the troops drew his sword and beheaded her, or, in some other texts, stabbed her in the throat. It is also said that the blood of Agnes poured to the stadium floor where other Christians soaked up the blood with cloths. She did not want to marry but wanted to have God in her life. A few days after Agnes' death, a girl named Emerentiana was found praying by her tomb; she claimed to be the daughter of Agnes' wet nurse, and was stoned to death after refusing to leave the place and reprimanding the pagans for killing her foster sister. Emerentiana was also later canonized.

S. Agnes is importantly one of the seven women (excluding the Mother of God) whose name appears in the Gregorian Canon of the Mass. Also on this day, the Pope celebrates Mass in the basilica of Sant' Agnese fuori le Mura, where the saint's relics are said to rest, and there he blesses two lambs, taken by tradition from the Abbey of Tre Fontane. These two lambs are then shorn (customarily on Maundy Thursday), and the wool used to create the pallium, the white neck-stole given to Metropolitan Archbishops by the Pope on their appointment as a sign of his delegation of jurisdiction to them (traditionally on the Feast of Ss. Peter and Paul).

You can see a short video of the Holy Father blessing the lambs (adorably trussed up in little baskets for easy liturgical access) on youtube, by clicking here. The report contradicts my information on the source of the little lambs, saying they are hand-reared by nuns in the convent of San Lorenzo.

Yesterday I started typing the story of our own (fictional) Parish lambs, Dandy and Wonton, who managed to get to Rome by Easyjet before being turned away from S. Peter's by Msgr Lombardi. They are working on an Eastertide collaboration with 'the Priests' but have chosen to spend their campaign money on an interrail ticket around Europe's 'winter cities' until then. Unfortunately, their story was erased by Blogger, but I will scan and post any post-cards I receive from them. 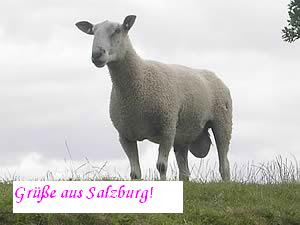