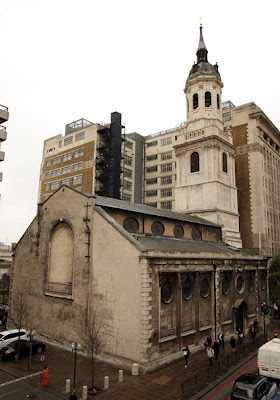 Tuesday saw the solemn consecration (or "baptism") of a new set of twelve bells at S. Magnus the Martyr, the result of years of hard work by the St Magnus Bell fund, headed by Dickon Love. He managed to raise the £300 000 needed to cast an entirely new set of bells at the famous Whitechapel Bell Foundry.

When the bells are rung on Easter day, this is will be the first time that bells have been heard from the tower of S. Magnus since the Second World War, when the original bells were removed and eventually sold for scrap. Since the consecration of the bells marks such an important milestone, for the church and the City of London as a whole, the consecration ceremonies were conducted with the utmost dignity and solemnity. The Rt Rev Richard Chartres, Bishop of London blessed the bells according to the traditional formula, assisted by various clergy. The Lord Mayor of London was in attendance, occupying the throne traditionally set aside for him in the church. 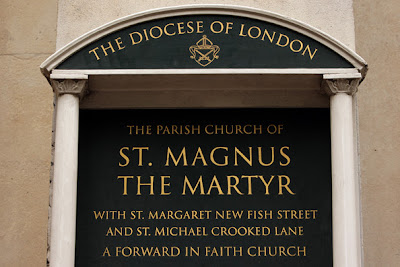 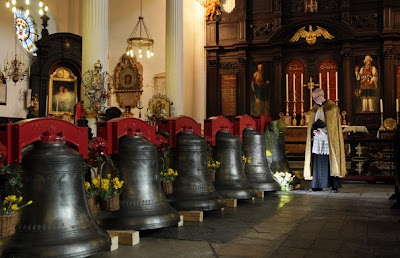 Parish priest Fr. Philip Warners inspects the bells before the service. Each bell is named after a Saint and most are dedicated to a particular person chosen by the bell's sponsor. The bells will remain in situ for now, but will be gradually taken up to the tower as their supports are built. 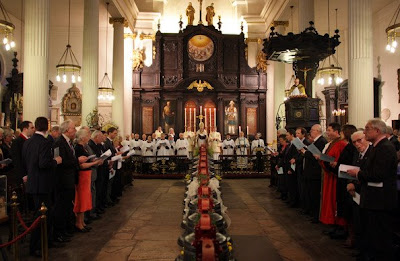 After ranks of City dignitaries and ranks of clergy have processed in to Handel's Zadok the Priest, the Bishop opens proceedings with a long prayer that evokes the use of trumpets in Temple worship, and asks that the present vessels (ie the bells) be for an increase of devotion in all those who here their ring. He then proceeds to wash the bells with Holy Water. 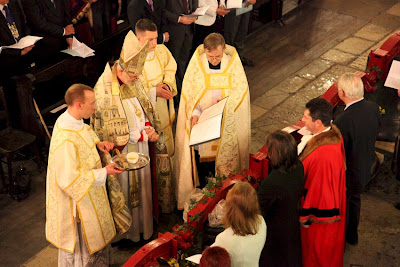 Having washed the bells, the Bishop asks the sponsor by what name the bell should be known, for example, one is called Michael (after one of our patron saints). The Bishop is wearing the famous London cope which depicts the church tower of every church in the City. 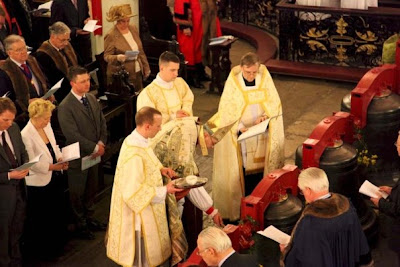 He then makes the sign of the cross on the bell with Oil of the Sick, saying "Sancte Michaele, ora pro nobis" while the choir sings an antiphon composed for the occassion: "Sonate supra urbem Londinii et trans flumen Tamesis". 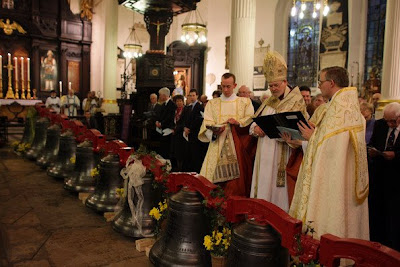 When the bells have been named, the Bishop makes several signs of the cross on them with Holy Chrism. 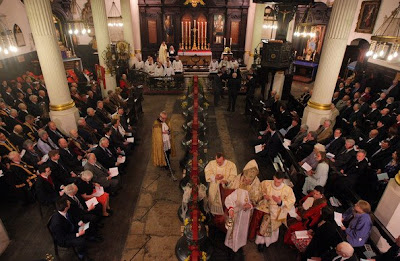 The Bells are then censed with the thurible. The Assistant Priest is seen following behind with a chaffing dish of incense and herbs which goes under the bells to thoroughly cense the inside. This is followed by another long prayer which speaks of the peel of bells driving away storms and demons, a Gospel reading and a final blessing. 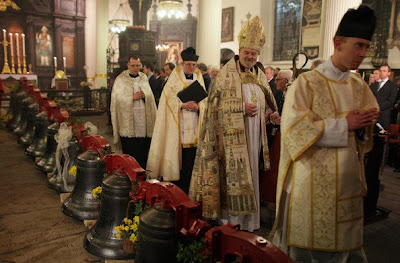