Starting at the beginning 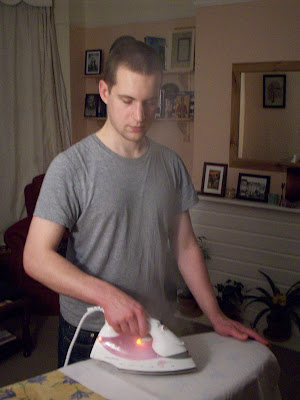 If you've managed to avoid learning/reading/hearing about Advent until now, you've done pretty well. My liturgical diary has a couple of pages inserted before Sunday 30th November 2008 which explains the season of expectant waiting, preparation and penance before the coming of the Saviour. At least I think it does, because I haven't been bothered to read it yet. Similarly, I find myself flicking through the first few pages of my "new" Layman's Missal (1962), preferring to skip the first few pages of dense text about the nation of Israel heaving etc in order to get up to speed with the juicier Advent collects, the Rorate Coeli and - so as not to get caught out next time I go to S. Silas, Kentish Town - to learn and commit to memory the plainsong for the antiphon Alma redemptoris mater....

For years now, Advent has pretty much been a "pre-Christmas period" outside of Church. We all (quite rightly) have a good whinge about the lights and Christmas trees going up in October, and how the popular enthusiasm for watching the Sugababes flick a switch on Oxford street doesn't quite carry over into a mass return to religion come Christmas morning Mass.

It doesn't take much to remind us, in the midst of all this shopping, party-planning and stirring up our Christmas puddings (which Anglican pedantics will have done last Sunday), that the Church has a liturgical year, a rhythm of its own that runs in tune - not so much with the seasons of nature - but with the history of man's redemption. This week, countless people looked on in horror as a bloody drama unfolded in Mumbai. The end result of the killing spree and subsequent hostage-taking is about 172 dead. It took three days for Indian security forces to bring the attacks to an end after long, protracted gun-battles with the attackers. Immediately, the authorities suggested a link with the old enemy, Pakistan - perhaps to disguise the fact that they really had no idea who the attackers were, and had not been able to prevent the attacks. The news feed style of contemporary broadcasting, by which we are literally "fed" with news as it happens, only serves to underline the banality of suffering and death in our world. Yet we need nothing else to remind us that we are so close to, yet so far from, our Salvation. We are still locked in the same cycles of sin and death, the nations are still heaving in distress while complacent regimes look on, just like Israel in Roman shackles. We would be entirely foolish, and irresponsible as Christians, if we were to try to skip these pages to get to the good stuff; if we were to abandon the world in search of our own, individual, salvation. While the seasonal words we read about waiting, expecting, hoping for the Saviour might become jaded over time, there is no better time than the here and now to re-engage with the horrors of our broken and sinful human societies whilst being entirely reinvigorated by that hope that comes directly from faith in God.

So it is that we should start at the beginning. At S. Magnus, we begin the Advent liturgies with the traditional prayers at the foot of the altar, where the sacred ministers recite together Psalm 42 with the antiphon "Introibo ad altare Dei, ad Deum qui laetificat juventutem meam...I will go unto the altar of God..." before making a confession of sins in the Confiteor prayer. These prayers always remind me of the Gospel story of the Publican and the Pharisee. In contrast to the self-aggrandising Pharisee, the publican stood far from the altar, not even presuming to raise his eyes to God, where he beat his breast and said only "Have mercy on me Lord, for I am a sinner", and it was his prayer, not the Pharisee's, that found favour with God. Just as in the Gospel, so it is in the traditional liturgy; the priest brings the sins of the faithful to the foot of the altar with faith and humility before offering the sacrifice of Calvary. Starting at the beginning means starting work with ourselves, with our own sinful and fallen nature, always hopeful of the Salvation that was won for us in Christ.
Posted by ex_fide at 18:22