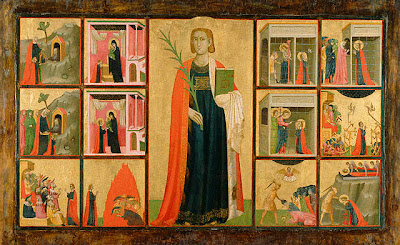 Perhaps I’m a bit morbid, but the first thing that comes to mind when I think of S. Catherine of Alexandria is the horrific way in which she was condemned to die; by being lashed to a ‘breaking wheel’ where should would be beaten about the limbs with a cudgel. I can’t imagine a more excruciatingly painful way to torture a person to death than by breaking their bones one by one. Unless the condemned received blows to the internal organs, which resulted in a relatively quick death, it could take days to die from the shock. For further humiliation, the victim’s limp body would be woven between the spokes of the wheel, which would be hoisted into the air for the birds to peck at.

According to the hagiography, Catherine escaped this fate by a miracle – the wheel broke when her body touched it - and she was instead decapitated. Like many early Christian martyrs in Egypt, Catherine’s “crime” was to speak out against the persecution and murder of Christians by the emperor Maximus. Catherine took her complaint straight to the palace, and succeeded in converting the emperor’s wife and many pagan advisors to the Faith, before being martyred with them.

If only Egypt during the Roman persecution were such a distant memory, but alas, the modern Republic bears a striking resemblance; a country where - to use a common cliché – acts of state violence, torture and intimidation are systematic. Organisations such as Human Rights Watch and Amnesty International regularly report on incidences of state brutality by the Egyptian police, Internal Security or other state apparatus: torture in custody, physical violence against demonstrators and intimidation of reporters. Indeed, Reporters without Borders ranked Egypt 143rd out of 167 countries for press freedoms in their 2006 report, citing strict press censorship laws and harassment of journalists, which means that those who speak out about the cruelty of the authorities quickly become victims themselves.

While I was a student, I lived in Egypt for nine months during 2005/6. I tried as much as possible to spend most of my time with Egyptians, especially non-English speakers, to get beyond a guide-book “feel for the place” and really get to know Egypt intimately. I soon recognised the iron grip in which the Egyptian state holds its citizens, and came to understand the effect of that corrosive fear and dread by which a despotic government holds an entire society hostage.

In late 2005 I used to go to a language school in the Mohandiseen area of Cairo, not far from the traffic island in front of the Mustafa Mahmud mosque. The area had recently become famous because a few hundred Sudanese refugees had occupied the traffic island and had set up camp there to protest at the UN refusal to move them to another country of asylum, claiming they faced racist discrimination in Egypt. Their demands certainly didn’t strike a cord with most Egyptians, who resented the claims and thought their protest was about opportunism rather than human rights. I remember walking past the traffic island to get to school and being hit by the awful stench of human sewage running into the drains. The whole place was rank and squalid; once I saw a Sudanese woman dressed in a bright yellow t-shirt standing over a drain taking a shower from a bucket of dirty water, while raw excrement ran between her feet. There were scores of dirty children crammed into little round tents made of old blankets and torn protest banners hanging from street-lamps shuffled limply in the breeze.

On New Year’s Eve 2005, I was in an internet café checking the news headlines when I found out that overnight, the police had removed the camp on the traffic island and had detained the protesters, including the women and children. Pictures emerged a few days later that showed hundred of state security men dragging protesters from their tents, and those that resisted were drenched by a water canon. Mothers were separated from their children as they were shoved onto buses with nothing but the clothes on their backs, and taken to military detention centres outside of Cairo. Many were released from detention during January; the fate of some remains a mystery. Four months later I was discussing all of this with a coordinator at the refugee centre in Cairo’s Anglican cathedral. She told me how many of the people from that traffic island were starting to come forward to register for help at the centre but that most of them didn’t have any form of documentation with them, since everything had been soaked through by the water canons and dumped afterwards by the police.

A year later, I was in a friend’s car when someone in the front seat passed me his mobile phone and said “watch this”. The video he’d opened showed a man stripped from the wait down with legs tied up and suspend and his arms trussed behind his back being sexually assaulted with a wooden stick, apparently by police officers. The footage had been filmed by one of the policemen on his mobile phone, and sent to his friends before it found its way onto the internet. After a public outcry, a local newspaper managed to track down the victim; a 21 year old minibus driver called Emad el-Kabir, and they provided him with lawyers and encouraged him to press charges. When he did so, he in turn was arrested. One of the Egyptian bloggers that broke the story and who posts other evidence of police brutality, Wael Abbas, has been harassed constantly by the police ever since. Fellow blogger, Nabeel Soliman, was also arrested and sentenced to four year’s jail for contempt of religion, insulting the president and spreading false information. Since then, various evidence of torture in police custody has been collected by human rights groups and independent bloggers, exposing them to great danger. Although charges are occasionally brought against the authorities, they result in few convictions.

I remember reading somewhere that saints in every age give to society not what it wants, but what it needs; always standing against the specific moral bankruptcy that plagues their era. For S. Catherine, this was the persecution of Christians by a pagan regime, and she was martyred because she refused to consent to this. She feared no one but God, and received the crown of martyrdom for dying in His name.

Perhaps the legacy of S. Catherine in the country of her birth is the vision and optimism of those who stand against tyranny and intimidation, whether or not they are Christians. Like S. George, whose birthplace near Bethlehem is marked by a church and a mosque on the same spot, S. Catherine is one of those Middle Eastern saints who manage to bring Muslims and Christians together around a shared understanding of sanctity. Human rights activity in Egypt offers the chance for Christians and Muslims to transcend the inter-religious tensions that blight that society in the name of a common goal of justice for all. They, then, can take heart from the example of this great Saint, who believed, even unto death, that…Blessed are those who hunger and thirst for righteousness, for they will be filled.
Posted by ex_fide at 19:19