The Antidoron, the Pain Benit and the Sunday Loaf 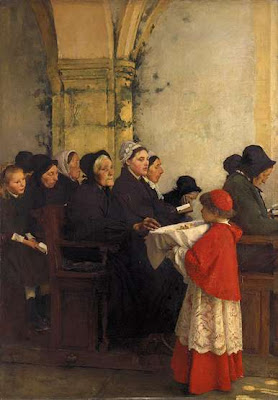 I've been considering quite a lot recently the role and history of blessed bread in the liturgy and by extension, in parish life. The distribution of bread which is blessed, not consecrated, at the conclusion of the Liturgy is found in both Western and Eastern liturgical traditions. The Antidoron, the remains of the Eucharistic breads not consecrated during the Liturgy, is distrubted after every Liturgy amongst Russian and Greek Orthodox christians. The custom has as much of a history in the West, attested by the existence of no fewer that six benedictio panis prayers in the Roman Ritual, and the survival in France of the pain benit, bread blessed before, during or after the liturgy and distributed to the faithful as a sign of charity and community. 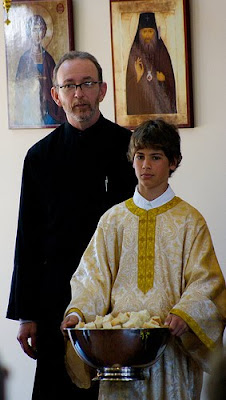 The common origin of both is found in the primitive liturgy, where the faithful would supply the bread that would be consecrated in the Liturgy. It is assumed by some that surplus bread was consumed by those who had been present at the Liturgy, including the catechumens (Gregory Dix makes reference to this in his description of the primitive liturgy in Sacramental Life, where he imagines a modern re-enaction consisting of secretive Christians arriving at a house laden with scones to be consecrated!). This custom survived as the Fermentum, where a Bishop would send consecrated Eucharistic Bread to his priests as a sign of their communion. Later, in order to prevent profanation of the Sacrament, as as the baking and supplying of the bread became the responsibility of ministers, supported by the donations of the faithful, the parrallel customs of the Western eulogia and the Eastern Antidoron took shape. As the Catholic Encyclopaedia notes:

The usage then began of sending blessed bread instead of the Holy Communion to those who did not communicate at the Mass, and to those who might wish to receive this gift as a pledge of communion of faith. These who did not communicate received bread offered at the Offertory the Mass but not consecrated. It appears to have received no other blessing than that of the Offertory Prayer, and was considered blessed because it formed part of the oblation. This bread is called eulogia, because it is blessed and because a blessing accompanies its use; it is also called antidoron, because it is a substitute for the doron, the real gift, which is the Holy Eucharist. The eulogia prescribed in the liturgies of St. Basil and St. John Chrysostom, but now it is distributed to all, both communicants and non-communicants. It existed also in the West, and is mentioned by St. Gregory of Tours, the Council of Nantes, and Leo IV in terms which would make it appear a somewhat universal custom.

Other small loaves, blessed but not consecrated, were also called eulogiae, and used by Bishops in a similar way to the fermentum, and the sending of a loaf signified by a Bishop could signify the resumption of communion after a schism or censure.

The development in the West of the wafer-like Eucharist host, which could not be easily baked in most homes and became a task entrusted to religious, signified the beginning of the end of the original eulogia, bread presented at the Offertory. The custom survived, however, in France, where one continues to see vestiges of Liturgical praxis that have died out in the rite of Rome. CE again:

Later, when the faithful no longer furnished the altar-bread, a custom arose of bringing bread to the church for the special purpose of having it blessed and distributed among those present as token of mutual love and union, and this custom still exists in the Western Church, especially in France. This blessed bread was called panis benedictus, panis lustratus, panis lustralis, and is now known in France as pain bénit. It differs from the eugloia mentioned above, because it is not a part of the oblation from which the particle to be consecrated in the Mass is selected, but rather is common bread which receives a special benediction. In many places it is the custom for each family in turn to present the bread on Sundays and feast days, while in other places only the wealthier families furnish it. Generally the bread is presented with some solemnity at the Offertory of the parochial Mass, and the priest blesses it before the Oblation of the Host and Chalice, but different customs exist in different dioceses. The prayer ordinarily used for the blessing is the first or second: benedictio panis printed in the Roman missal and ritual. The faithful were exhorted to partake of it in the church, but frequently it was carried home. This blessed bread is a sacramental, which should excite Christians to practice especially the virtues of charity, and unity of spirit, and which brings blessings to those who partake of it with due devotion. The Priest, when blessing it, prays that those who eat it may receive health both of soul and body: "ut omnes ex eo gustantes inde corporis et animae percipant sanitatem"; "ut sit omnibus sumentibus salus mentis et corporis". In some instances the pain bénit was used not only with superstitious intent, and its virtues exaggerated beyond measure, but also for profane purposes. This usage was brought from France Canada, and was practised chiefly in the province of Quebec. There the pain bénit had blessed immediately after the Asperges, and then distributed to those who assisted at high Mass. The parishioners furnished it in turn, and vied with one another in presenting as rich and fine a pain bénit as possible, until finally the bishops, seeing that it entailed too much expense upon the poor circumstances, prohibited it. Within the last twenty-five and thirty years the custom has almost entirely disappeared.

I'm not very knowledgeable about the extent of this practice in England, although it would seem to make sense that in Sarum something similar was done with bread as in France, at least on major feasts. However, the custom of wealthier parishioners supplying bread for the needs of the poor seems to have been a part of Parish life in the post-reformation Church of England, and to have possibly flourished on account of the Poor Laws enacted from the 16th-19th centuries. My own Parish church of S. Magnus, built by Wren in 1676, features eight small shelves either side of the main doors in the Narthex to house seven loaves, which were distributed to poor families after Sunday Service. It is unlikely that this bread ever received a special benediction before distribution, but the fact that this bread was donated by those with means to do so for the benefit of fellow Christians, as well as the mere fact that this bread was placed in individual shelves visible to all as they left the Church means this custom of the Sunday Loaf is linked, at least in ethos, to the eulogia of old.

I believe personally that all of these uses of bread honour an ancient and authentic aspect of the liturgy; that of giving. The Sacrifice of the Mass, depends in material terms on the giving of real bread and wine by the faithful, or at least having contributed by giving money. The consecrated Bread was received by those initiated and disposed to do so, but surplus bread, blessed not consecrated, was an important sign of the Christian's belonging to the community, even if he is unbaptised. As we saw with the pain benit, when the Eucharistic bread was no longer supplied directly by the faithful, they substituted ordinary bread, blessed at some point during the Liturgy, to be distributed afterwards. To my mind, this is the meanings of the word "leitourgia", which signifies the whole community of the faithful supplying the spiritual and the material substance of the Eucharistic Sacrifice. To disinvest them of this opportunity to contribute materially, is the first step towards alienating the faithful from the liturgy of the Mass. I would urge "practitioners" of Liturgy to consider reviving the custom of the pain benit, or preferrably of the actual eulogia (blessed by being part of the Offertory). It would be quite simple for an MC or server to place a basket of bread on the altar during the Offertory which could be removed after having been blessed at "haec dona, haec munera" and distributed after Mass. Alternatively, bread could be blessed after Mass according to the Ritual and distributed in the Narthex. Does that sound like such an eccentricity.
Posted by ex_fide at 10:59 9 comments

Former member of the congregation of S. Magnus speaks out about present abuses: exclusive voice from the grave.... 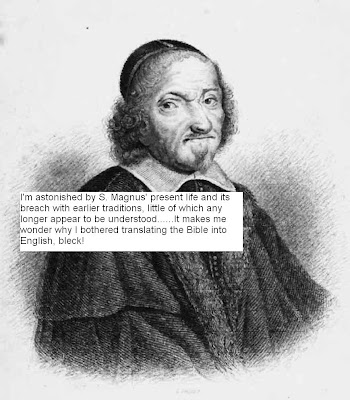 "Many former members of the congregation [of S. Magnus] in more solid days are astonished by the church's present life and its breach with earlier traditions, little of which any longer appear to be understood."

-Anonymous [so far failed to present himself by name, but rumoured to be the voice of Myles Coverdale speaking from the grave]