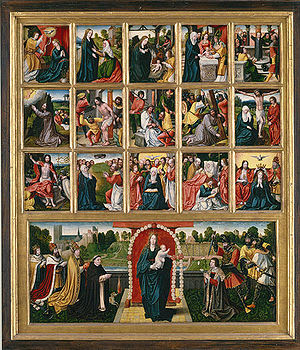 For a long time I was put off the Rosary. I used to find it too long to say a full five-decades, and sometimes I would close my eyes and actually fall asleep during the first one. I was also put off by the sugary pamphlet literature that has grown up around this devotion, all of the different "methods" or ways of praying the Rosary which would help the devoted Christian to say a Rosary without distraction or wandering thoughts, and to derive enormous benefits from its recitation. One phrase sticks in my mind, I think from the book Secret of the Rosary, where we are directed to "make each Ave maria that falls from our lips a little Rose, which we offer at Our Lady's feet, and to weave them into a crown of 53 little flowers with which to crown Her Queen of Our Hearts "....or something similar, I'm paraphrasing, but the language always struck me as camp and unnecessary.

The claims about what could be achieved by the recitation of the Rosary also seemed desperately overstated. After reading some of these pious publications you could believe that a Rosary can do anything, and I did wonder if perhaps these Rosary novena groups were dropping the odd Pater Noster if their devotional efforts hadn't yet delivered world peace.

One of the most detrimental aspects of counter reformation Christianity, in some ways still perpetuated by nominally "Traditional" groups, has been to push personal spirituality into the centre of the Church's public life and to do so at the expense of authentic Liturgy, displacing the traditional understanding of Liturgy as corporate worship, and replacing it with a highly personal and individual experience of the Sacred Liturgy. The typical Traditionalist menu of Rosary, Votive Low Mass, Stations of the Cross, and Devotions to the Sacred Heart is built around the promotion of certain devotions, visions, prayers and indulgences by Popes of the last few hundred years and the promotion of private devotion over public worship. Even the Low Mass, the one bit of Liturgy on the menu, has been turned into a devotion. The faithful got used to saying the Rosary throughout the whole of Mass, or working through a series of meditations while the Priest stood at the altar, stopping only to adore the Host at the elevation. The Liturgical Movement replaced the Rosary beads with Layman's Missals, providing the laity with a vernacular translation of the Mass, in many cases, and instructing them on what was happening, but even this did not satisfy the need of the individual layperson to be doing something during the Liturgy, and we all know where that has taken us....

My understanding is that private prayer and public worship are two sides of the same coin, and we really can't have one without the other. We receive this understanding from scripture: although the Disciples are often to be found gathered together in prayer at key moments in the Gospel, and although prayer in the temple and the gatherings of the synagogue are by no means despised by Christ, we are also told:

Public worship and private prayer - they should balance each other out. Of course we can have an interior, private response to public worship, and I see no harm in groups of people gathering to practice certain devotions, especially the Rosary, but we have to be able to distinguish between them. Both East and West have devotions which are in some way supplementary to or modeled on Liturgy. Both have Hours of Our Lady to be said in addition to the original hours, the Eastern Church has paraliturgical akathists. But there is no question of replacing the Liturgy with them.

This is all a massive digression from what I originally wanted to say. So I'm back into the Rosary. I've decided that it's all about doing as much as you can, as much as you want to, and realising there can be too much of a good thing - if I find myself with half an hour to spare in the evening and I've already prayed the mysteries assigned to that day, much better to reach for my Office Book instead. Developing a private prayer life is all about building on manageable things, maintaining variety, and not getting hysterical over the Rosary.

Today I prayed the Sorrowful mysteries and effectively came up with my own little "method" without really wanting to. My biggest problem in praying the Rosary is wandering thoughts and not knowing how to meditate on a mystery beyond maintaining a static mental image of that mystery in my mind. To people who have this same problem I'd say: don't worry about it, just chuck your pamphlets away and go and find out how to pray the Rosary in a way that works for you....you're allowed to, it's private prayer! I found myself trying to unravel each of the sorrowful mysteries by drawing on moments from my own little via crucis in life, recalling moments of humiliation, suffering, sadness or anxiety that I could relate to each mystery, offering that experience to Christ and uniting it to the Blessed Passion. So for example, for the Crowning with Thorns I recalled a moment in which I felt utterly humiliated after an argument in public, during the Agony in the Garden I recalled a moment of absolute fear, anxiety and terror about what comes next. Not that we can ever truly understand or imagine the thoughts and emotions of Christ during those moments, but we can gain a small insight into the power of the Passion, and remind ourselves that It is real. By the last mystery I had rehearsed so much that I was left quite deeply moved, having perceived, in the boundless depth of these Sorrowful Mysteries the shallowness of so much in my own life. But this is where the Glory of the next set of Mysteries comes into play: we who believe in Christ know that all things are restored in Him. Although we make of ourselves an unworthy offering, in the prayers of the Rosary said under the breath, or at the great Amen sung aloud at the Liturgy, God takes what we offer and makes it worthy. The great joy of being a Christian is that, at the moment when it hits us just how unworthy and undeserving we are of mere association with Him, He reaches out a hand of friendship and invites us into His very Heart. In the Eucharist we offer our unworthy present, and receive the Perfect Gift: Him in us, and we in Him. This is what it means to be alive in Christ, and every glimpse of this brings the Christian soul greater joy, to sustain us on this earthly pilgrimage.

Go to Mass, pray the Office, and if you still have the time and inclination to do so, pray the Rosary!
Posted by ex_fide at 13:56