Blessing of the Thames 2011 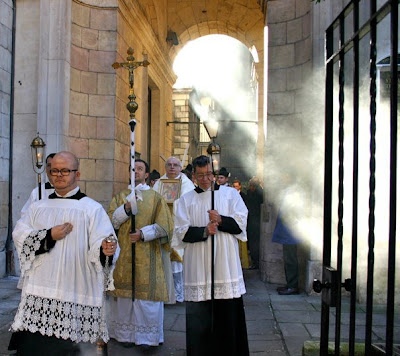 The Blessing of the Waters that is performed on the Feast of the Theophany in the East is well known. In the Old Roman rite, water was also blessed by dipping a cross into it (symbolic of Christ's Baptism) on the Eve of the Epiphany. At S. Magnus the Martyr, this ancient practice manifests itself as the Blessing of the Thames on the Sunday after the Epiphany, celebrated as the "satellite" Feast of the Baptism of the Lord, using the propers of the Epiphany Octave.

Above, you can see the Procession to the bridge forming outside S. Magnus. 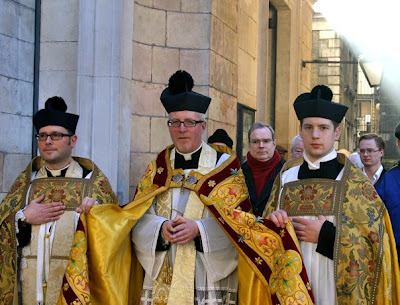 Here, the Ministers leave the Church. Celebrant, Assistant Priest and an acting Subdeacon. 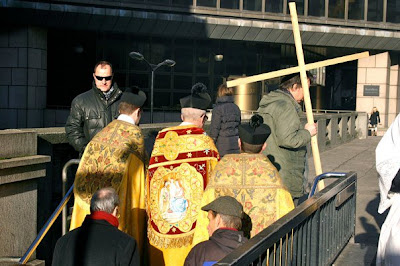 I have included this photo to illustrate that the Celebrant's cope features an image of the Holy Family. In the pre-Pius XII calender, this Sunday would have been the Feast of the Holy Family. All of these Liturgical observances, however, are inextricably linked in the history of the celebration of the Epiphany, and historically many different "epiphanies" or "manifestations" of Christ have been celebrated around this feast; the nativity, the angeli ad pastores episode in the Gospel, the coming of the Magi (as has developed in the West), the Baptism of Christ and finally the Wedding at Cana. While in the West these epiphanies have, to varying degrees, split off into different observances, the Armenians keep the Feast of the Theophany as the Nativity and the "Epiphanies" in one. 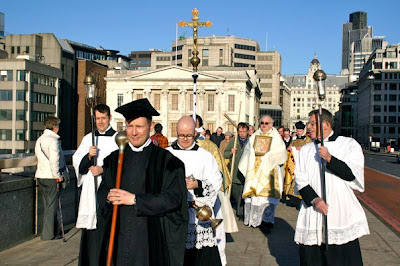 The Procession is led up onto London Bridge by the Verger of the Church. The Parish of S. Magnus, like many English churches, maintains the tradition of the Verger leading processions. An Icon of the Epiphany that is normally venerated in the Baptistery of S. Magnus was also borne in Procession. 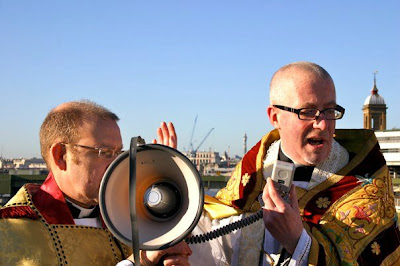 The Solemn Blessing of the River has, like many other solemn blessings including that of palms on Palm Sunday, a structure rather like an abbreviated Mass. It starts with readings from the Old and New Testament, followed by a "Gradual" hymn of S. Ephrem, culminating in a Preface, Prayer of Blessing forming the "Canon" of the rite and followed by a Collect-like prayer and dismissal. Above you can see the Cardinal Rector of S. Magnus blessing the River while Canon Andrew Nunn of Southwark Cathedral holds the megaphone. This Blessing is a joint venture with Southwark, and the place of Blessing is the point at which the Parish boundaries of S. Magnus and S. Saviour's (now the Cathedral) meet, pretty much in the middle of the Bridge. 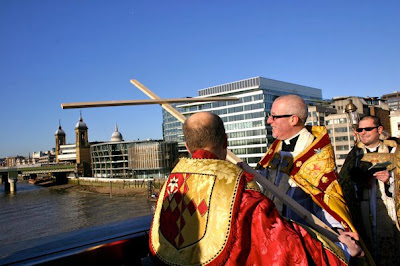 While the Old Roman Rite tamely dips a Cross into the Waters, the S. Magnus version, in common with Eastern Practices, involves a cross being thrown into the River Thames to bless it. Needless to say, no one is expected to jump in and retrieve it, as is common in Russia..... 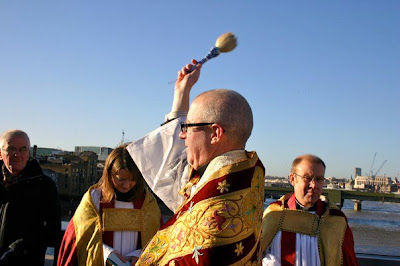 After the Cross is thrown into the River, the people are aspersed with lustral water. Just as this ceremony of Blessing is a reminder of the sinless Christ submiting himself to Baptism at the hand of the Forerunner, so this sprinkling is a reminder of our Baptism, and our duty to witness to it always.
Posted by ex_fide at 14:38