Good Friday in the Older Rite at S. Magnus 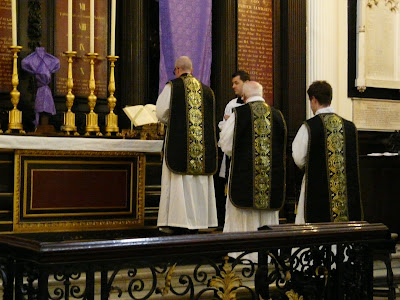 The ministers enter the Sanctuary, genuflect and prostrate. Two Acolytes spread an altar cloth on the bare altar and place the missal at the Epistle corner. In the photo above, the Celebrant looks over the reading that is being read by a lector. 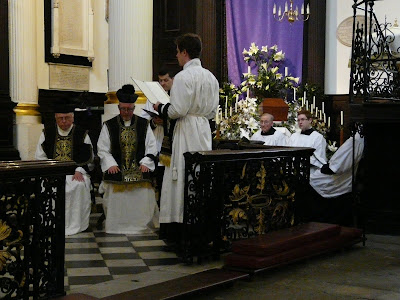 After a collect, the Subdeacon chants a reading from Exodus as an Epistle. 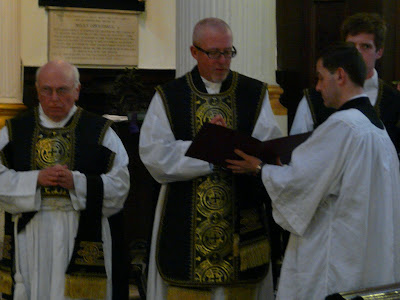 The Celebrant sings Christus during the Passion 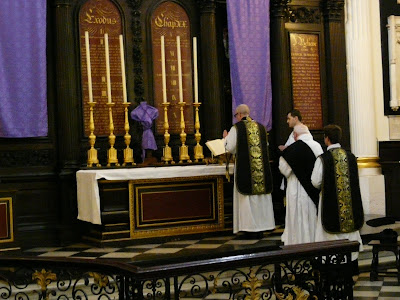 After the Passion and Gospel, the ministers go to the Altar for the Litanical, or bidding prayers. The intention is introduced by the Celebrant, and the Deacon sings "Let us bend the knee". 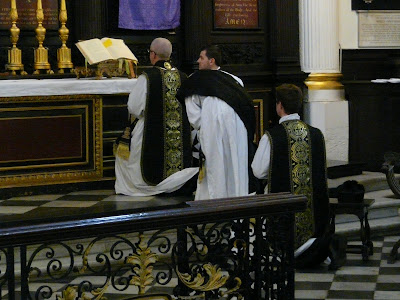 After a time kneeling, the Subdeacon sings "Arise" and the Celebrant sings the Collect. 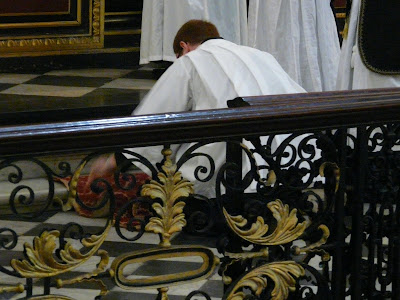 During the Collect for the Conversion of the Jews, an acolyte spreads the carpet and cushion in preparation for the Worship of the Cross. 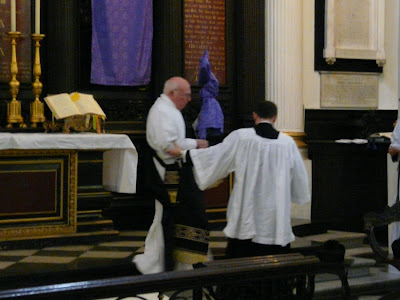 The Deacon goes to collect the veiled cross from the Altar and brings it to the Celebrant at the Epistle corner. 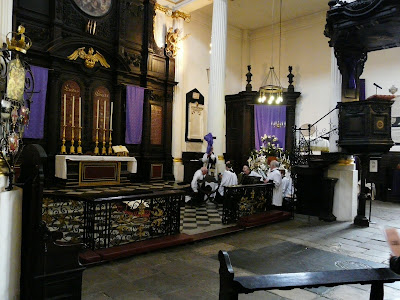 The Celebrant reveals the right arm of the crufied, and sings "Behold the wood of the cross, whereon the world's salvation was hung", all reply "O come let us worship" and kneel in adoration. 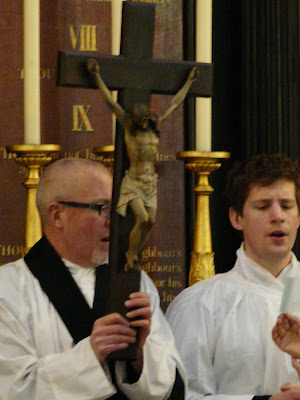 The Celebrant climbs a step, and repeats the above revealing the title board. Finally, he removes the veil entirely before the High Altar. He then places the Cross on a purple cushion (to symbolise Christ's regality) topped with a white veil (to represent His innocence, and His burial shroud) to venerate It. 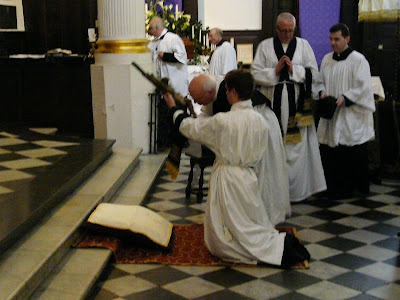 After this, the Subdeacon and Deacon venerate the cross. 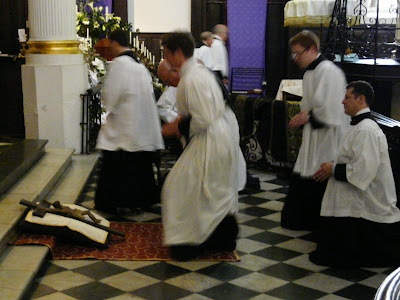 The other ministers come thereafter to venerate, making three double genuflections with prostration as they go. This is what our ancestors in England called "creeping to the Cross". 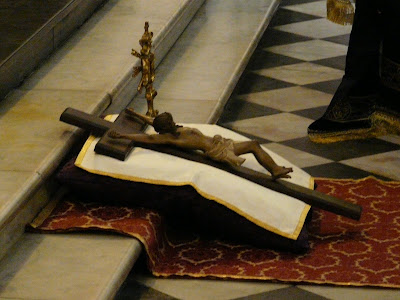 A relic of the True Cross is prepared also for public veneration. 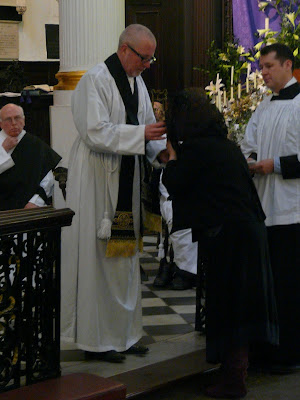 The relic is venerated by the faithful. 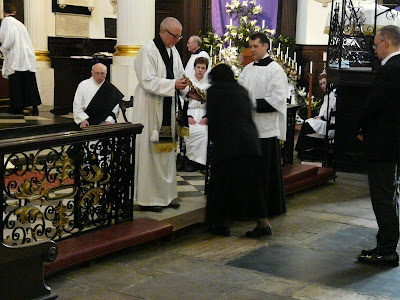 The choir sing the reproaches, recited quietly at the bench. 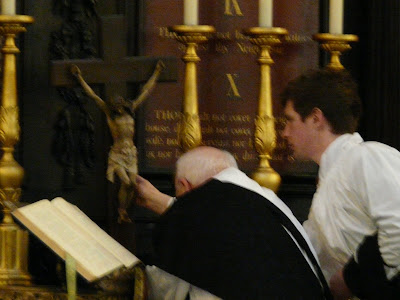 The Deacon places the Cross on the High Altar 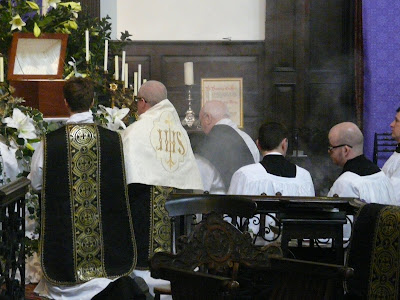 A procession is made to the Altar of Repose, and the Celebrant assumes a white humeral veil. 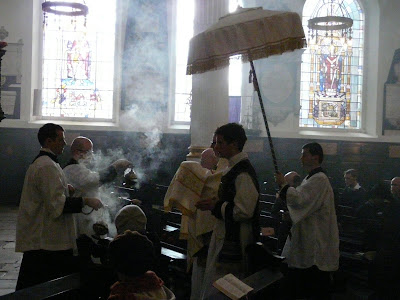 The procession of the Sacrament back from the altar is the first part of the Mass of the Pre-sanctified. 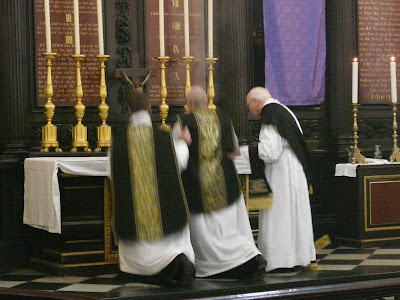 Here, the celebrant is seen censing the Elements. He has prepared a chalice of unconsecrated wine which also stands on the corporal. The Eucharist is censed, as is the altar but the Celebrant is not. He then says the Pray Brethren, not turning all the way, sings the Libera nos, performs the fraction and with some Communion devotions, receives the Host consecrated at Yesterday's Mass. 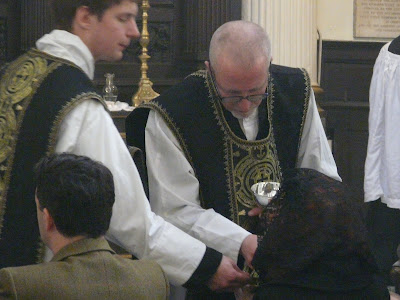 In deference to Local Custom, the faithful also receive Communion from a number of Hosts reserved with the Priest's Host. 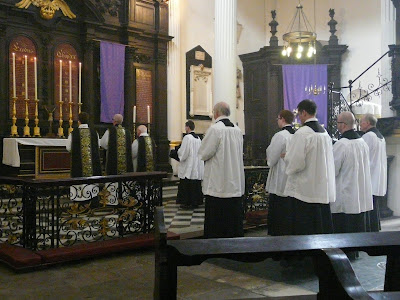 There being no other ceremonies, the ministers stand to sing "When I survey the wondrous Cross" before retiring to the Sacristy. 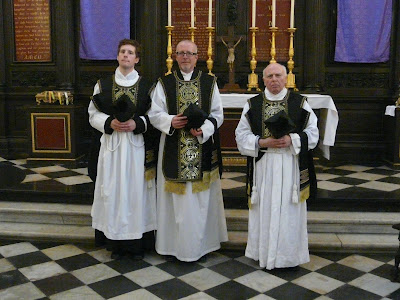 The ministers in the Sanctuary after the Liturgy
Posted by ex_fide at 09:16